Something weird happened on an otherwise ordinary Wednesday in July in New York City. A switch flicked. A baton was passed. A change happened. On July 15 2015, a brick and mortar retail icon closed its doors, while at the same time an e-commerce powerhouse had one of its biggest days ever. To me it was a significant moment in the shift in power from offline to online.

Let me explain. July 15 was the final day of trading for the FAO Schwartz toy emporium on Fifth Avenue in New York. This was the store where Tom Hanks danced on a giant floor-mounted piano in the movie 'Big'. It was the place where generations of New Yorkers and tourists alike overloaded on candy and the latest toys. I visited FAO Schwartz on its final day, and tellingly the big promotion in the window was Jurassic World. The 'dinosaur' could no longer survive - closing due to the escalating costs of running a 45,000 square foot physical retail store on one of the priciest strips of real estate in the world. 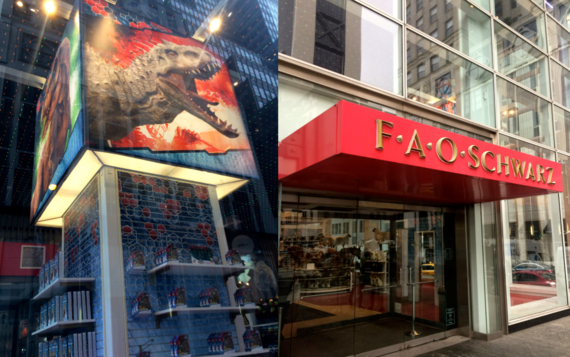 Meanwhile, July 15 was also when Amazon ran its members-only Prime Day sale. Amazon Prime is the $99 a year program that provides subscribers with free two-day shipping, as well as some other included goodies such as streaming music and movies. Wildly successful, 20% of all US households are Prime members, according to BrandAsset® Valuator Shopper research* run this year. Advertised as having "more deals than Black Friday", Prime Day generated $1.5 billion in revenue (according to a report in the New York Times) versus $250 million on a typical day at this time of the year. Besides the $1.25 billion sales uptick, Prime Day attracted even more new members. "It surpassed all our expectations," Amazon CFO Brian Olsavsky was quoted as saying in the Seattle Times "It was Christmas in July, quite frankly." 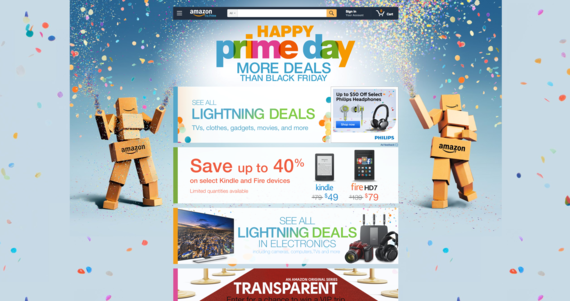 Admittedly, there was a negative side to Prime Day. One of the biggest trending tags on Twitter that day was #PrimeFail, as disappointed shoppers missed out on bargains that sold out quickly.

Nevertheless, it was a big enough deal to make traditional retailers follow in Amazon's footsteps. Walmart launched its own online sales event in response, as did Best Buy.

Post July 15, I keep seeing signs that a critical shift is occurring. On July 23, a Cowen & Company report stated that by 2017 Amazon will overtake Macy's in apparel sales. And on July 24, CNBC reported that Amazon's market cap exceeded Walmart, the largest company by revenue on earth. (And Jeff Bezos' personal value rose $8 billion, making him one of the richest 200 people on the planet.)

So this is epoch-making. It's not the end of traditional retail (I'm a big supporter of bricks and mortar, and even Amazon is tinkering with physical stores.). It is a loud and clear warning however that the old guard needs to not only continue retail reinvention, but also pick up the pace.

*BrandAsset® Valuator is a study run by Y&R, the parent company of Labstore, which Jon Bird leads.