Over time, our beloved English bulldog Winston developed constant itching and ear infections but wasn't helped by the usual treatments, either systemic drugs or localized ear drops. Our wonderful vet said it might be time for a specialist consult and food trial.

We had resisted a food trial previously since (a) we really didn't think his top-quality grain-free diet was the issue, and (b) it meant the food-shedding grandtots couldn't be here during that time. The diet was so strict that not a single Cheerio was allowed, never mind whole boxes of them that Winston consumed by strategically positioning himself under the baby's high chair. (Winston was so good he could usually catch them before they hit the ground.)

The word "specialist" put fear into our hearts. On-line research only confirmed that canine dermatologists are hugely expensive. The word "thieves" was not unknown.

So we were more than pleasantly surprised to arrive with Winston to find that the doggie dermatologist/allergist was hugely likeable and willing to discuss fees in advance. We agreed to a strict eight-week vegan food trial during which time Winston could only have the prescribed food ($36 per six pound bag, prescription-only). We needed to rule out food allergies before blood testing for environmental ones.

It was a daunting list of instructions plus new shampoos, medicated pads and lotions that we took home that day. Daily ear cleaning for Winston's ever-goopy ears, we discovered, was a two-human job which needed to done outside in HazMat suits. We needed to clean between his itchy paws every day with special wipes, swab the folds on his face, switch to a heavier-duty flea control medication, use an industrial-strength anti-itch shampoo, and the pièce de résistance, have him stand in a special foot bath for ten minutes at a time several times per week.

I showed the list to a dog-owning friend. "I'd kill myself," she said.

Meanwhile, how to get Winston to take his multitude of pharmaceuticals where turkey slices were suddenly off the table. In fact, Winston could not eat any food he'd ever eaten before which ruled out peanut butter and cheese. Winston flat out refused to ingest the allowed apple sauce or bananas. Ultimately we used marshmallow bits which Winston surprisingly liked and which we referred to as his antihistamine S'mores.

All of a sudden we found ourselves becoming, if not vegans, vegetarians as we simply couldn't bear to eat forbidden foods in front of Winston.

Alas for the all-new scrupulously-clean otically-irrigated religiously-vegan Winston, his itching did not diminish. So midway through the vegan trial, we decided to go ahead with the environmental testing, which screened for some 40 common environmental allergens. When the results came back several weeks later, we were in no way prepared for his biggest allergen: Human dander. Us. Seriously? (Was this canine karmic retribution for decades of doggie dander diagnoses in people?)

Since Winston's allergies were worse at night, we moved his bed out of our room thinking that might reduce his exposure to Typhoids Mary and Olof. But he simply came in and slept on the floor next to our bed.

Long term steroids are not good for animals or people, so we were delighted to hear about a new monoclonal antibody immunotherapy treatment recently approved for seriously itchy dogs which we hoped could be a substitute for his steroids. Normally we would have assumed that a treatment we can barely pronounce is going to be out of our price range but we learned it was surprisingly affordable, that being defined as less than Winston's current astronomical medical and pharmaceutical bills. And if a single shot per month could contain the little guy's massive itching, well worth it.

As the eight-week vegan food trial was ending, Winston ended up back at the doggie dermatologist with another horrible ear infection. Along with a stronger ear wash, a different steroid was prescribed. (The label advised Winston to avoid alcohol.)

On the last night of the vegan trial, I mixed some of his old food in with it to begin the transition back to a regular diet. Winston virtually inhaled it. Minutes later, he lurched into my open closet and threw up all over my shoes.

Deciding that a change of pace was probably good for Winston anyway, and because my closet was never going to recover from the smell of the old food, we started him on a hypo-allergenic limited-ingredient salmon and chickpea (no grains or potatoes) food that he scarfed up happily.

To our amazement, over the next week, both of his ears cleared up. What factor or factors resulted in this miracle? Was it the industrial-strength ear wash? The hypo-allergenic salmon and chickpea food? The new steroid? Olof's and my flawless ear cleaning technique?

Who knows. But not arguing with success. 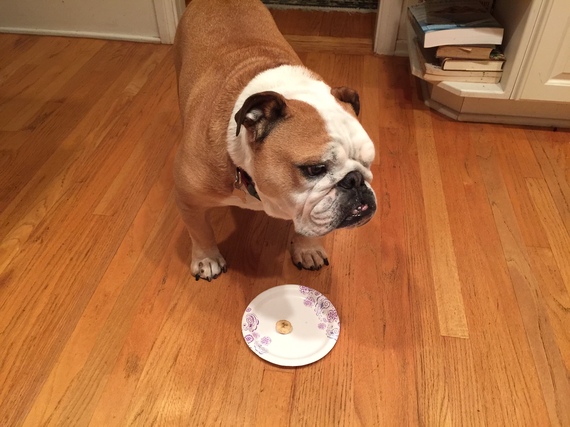