I love the ocean, and I thought the ocean loved me. I was wrong.

My father was a lifeguard, before I was born, so maybe my love of the ocean is in my blood. As children we grew up in Brooklyn and would go to Riis Park for our day at the beach. One very distinct memory is of my father as he stood waist deep in the ocean with my brother and sister at his side; the waves periodically lifted and dropped them in the water. Waist deep for my father meant it was well over my head so I remained a safe distance (or so I thought) behind them. Suddenly, a wave appeared and before I could turn and rush to the shoreline the ocean attacked. I found myself in a world of foam, pockets of air allowed me to breathe as I was tossed like a wet sock in a dryer. Head over heels I tumbled, my legs and arms scrapped by the crushed sea shells that covered the shoreline. After what felt like an eternity I found myself on the wet sand as the wave retreated out to sea; I'm pretty sure it laughed and gave me the finger as it left.

Without hesitation I ran back to the safety of our blankets and our cooler filled with drinks and the soon-to-be sand sprinkled tuna sandwiches that my mother packed for us.

"Run back to your mother, wimp" the ocean said, "but one day I will get you."

Jump ahead a few decades and I'm back at the beach, but now with my own kids in tow. It's a nice, quiet place on the Jersey Shore, Bradley Beach. Before we unload the car I told them how to act if they ever get caught in a riptide.

"Don't try to struggle against it," I explained. "Just swim parallel to the shoreline until you are free of it."

If only I had listened to that wise old man.

The following week I was in L.B.I. (Long Beach Island for those of you not from Jersey) with the woman I dated at the time to visit some friends. The two of us spent the better part of the day in the water; the ocean was rough and tossed us around with ease; I loved it. After a few hours she decided to go back to our spot on the beach. I told her I'd be out in a minute; I wanted to catch one more wave. Just as she reached the shoreline everything changed.

The sea went calm, the large waves disappeared, and the color of the ocean changed to a light green. As my girlfriend stepped out of the surf the ocean took hold of me. There was a kid on a raft just to my left, outside of the riptide I now found myself. Not sure if he could have helped or not, that question went unanswered as he drifted away to safety. 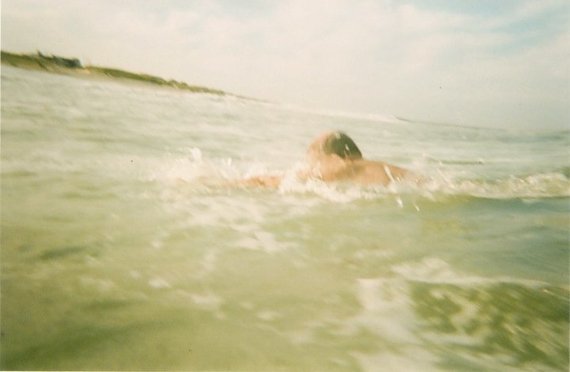 Finding myself in this position I did exactly what I told my kids not to do -- I swam for my life toward the beach. After a minute or so I accomplished nothing more than to increase my panic and decrease my strength. This was it; I knew I was going to die. Usually when people say that they are being overly dramatic, like when they don't get that last slice of pizza at dinner, but in this case it was a real thought that ran frantic circles around my brain.

A young girl screamed for help -- then realized I was that young girl. My throat grew raw. I looked toward the lifeguards, but the stand was empty.

Just then the ocean whispered, "Welcome back" as I was unceremoniously dragged out to sea.

Maybe I'd just slip under the water and get it over with, I thought (no, not really, I swam like a lunatic and screamed for my life). It was then that I saw a lifeguard on a surfboard to my right.

"Ok, climb on up," he calmly said as he paddled alongside me.

"No, I'm ok, I'll just hang on," I spoke nonchalantly as if I didn't have a care in the world. At the same time my heart pounded so hard it wanted to leave my chest and jump on the board without me. Then I noticed that everyone (and I mean everyone) on the beach were on their feet staring at me.

"Sorry," he repeated, "You have to climb up on the board."

My climb up on the front end of the surfboard was like the end of Free Willy when the whale majestically jumped over the jetty to his freedom. Well, it would have been like the movie if Willy flopped out of the water and landed on the jetty like a bag of wet cement dropped from a helicopter.

Safely positioned on the front of the surfboard I was gently paddled back to shore while my pride stayed out in the ocean where it quietly slipped beneath the waves and died.

Once back on the beach my girlfriend made sure I was okay. After that her friends, then strangers, all asked if I was okay. When I assured them that I was fine, that same girlfriend and friends made fun of me for the rest of the day, through dinner, and into the night.

The ocean failed to get me a second time, but I still love the ocean and go there as much as I can. Just that now I keep a keen eye out for those odd wave patterns or the strange discoloration of the water. I also keep an ear out for the voice that whispers just above the mist, "Welcome back -- again."