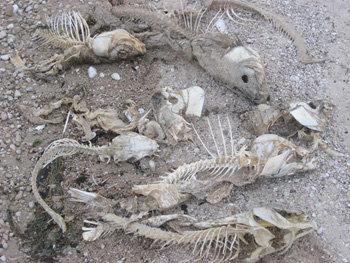 Steak or salmon? Millions of menu-mulling diners ask themselves this question every day. Enjoy your dithering while you can, folks, because the day is coming when you may not have the luxury of choosing the lobster over the London broil. For those with a more populist palate, I've got some bad news, too; a future with no more fried clam strips or canned tuna, for you.

Why? Because fertilizer runoff from industrial agriculture and fossil-fuel use are causing catastrophic "dead zones" in our oceans, "killing large swaths of sea life and causing hundreds of millions of dollars in damage," according to Scientific American.

It's Agribiz vs. Aquabiz, and at the moment, the farmers are beating the waders off of the fishermen. Scientific American notes that "there are now 405 identified dead zones worldwide, up from 49 in the 1960s." And once a marine habitat falls victim to hypoxia, i.e. oxygen deficiency, the outlook is grim:

Only a few dead zones have ever recovered, such as the Black Sea, which rebounded quickly in the 1990s with the collapse of the Soviet Union and a massive reduction in fertilizer runoff from fields in Russia and Ukraine. Fertilizer contains large amounts of nitrogen, and it runs off of agricultural fields in water and into rivers, and eventually into oceans.

This fertilizer runoff, instead of contributing to more corn or wheat, feeds massive algae blooms in the coastal oceans. This algae, in turn, dies and sinks to the bottom where it is consumed by microbes, which consume oxygen in the process. More algae means more oxygen-burning, and thereby less oxygen in the water, resulting in a massive flight by those fish, crustaceans and other ocean-dwellers able to relocate as well as the mass death of immobile creatures, such as clams or other bottom-dwellers. And that's when the microbes that thrive in oxygen-free environments take over, forming vast bacterial mats that produce hydrogen sulfide, a toxic gas.

How fitting! More toxic gas from the same chemical companies who gave the world Agent Orange. Except that in this case, it's an unwelcome by-product. Oops! Sorry 'bout that!

But don't worry, Monsanto and DuPont are on the job. They've come up with a great new biotech solution to the mess they've made of our oceans; "NUE" crops, as in "nitrogen use efficiency." These NUE crops are engineered to have roots that absorb more nitrogen, reportedly allowing farmers to "produce the same yield with half as much fertilizer."

I've got a better idea. Why don't we stop looking to the same corporations who have screwed up our environment to fix things? As Prince Charles told the Telegraph the other day, the multinational companies promoting the use of GM crops are conducting a "gigantic experiment I think with nature and the whole of humanity which has gone seriously wrong." Charles has predictably been labeled a luddite for daring to challenge "a system that is fundamentally flawed," as Grist puts it. But it's the Better-Living-Through-Biotech crowd who's just too blinkered to see the Big Picture -- you know, the one where all their brilliant breakthroughs come back to bite us on the ass.

There's the Roundup-resistant strain of super weeds Monsanto's helped create, for example, and let's not forget another great Monsanto innovation, Posilac, aka rBST, the bovine growth hormone designed to wring more milk out of our dairy cows. Unfortunately for Monsanto, cows are not sponges but, in fact, living, breathing creatures whose bodies aren't equipped to cope with the stepped-up production induced by artificial hormones.

Consumer rejection of rBST-tainted dairy products finally forced Monsanto to admit that it's looking to dump Posilac, but you can bet they've got any number of equally ill-conceived "breakthroughs" in the pipeline that promise to solve all the world's food crises. In fact, the Agribiz apologists will tell you that industrial agriculture is our only hope.

But as Frances Moore Lappé wrote on Huffington Post last week, the notion that we should be looking to Agribiz to feed the world is pernicious propaganda spread with the aid -- sometimes unwitting -- of a lazy and uninformed media. The story that's not getting out is the fact that farmers all over the world are finding new ways -- and reviving old ones -- to produce food without destroying our soil and water. As Lappé notes:

We managed to feed ourselves for centuries without relying on chemicals and we can do it again. As environmental journalist Claire Cummings writes in Uncertain Peril:

Our success as a species did not come about because we imposed our values on nature. As a survival strategy, domination is doomed...Our outmoded engineering technologies require us to exert too much command and control over nature in an endless cycle of tyranny... ...Genetic engineering has misled us into believing that we have to reformulate nature according to our own designs. Even if it works, it's a dead-end strategy, because it forces us to live within the extremely limited confines of the human imagination.

Limited, indeed. Who could have predicted that those amber waves of grain we grow from sea to shining sea would wind up destroying those seas -- aside, of course, from the marine biologists who've been "sounding the alarm on hypoxic zones for decades"? Imagine this; if we don't take drastic steps to halt the growth of these dead zones, the question of whether to order the meat or the fish could become as obsolete as VHS vs. Beta. Better learn to love your veggies.