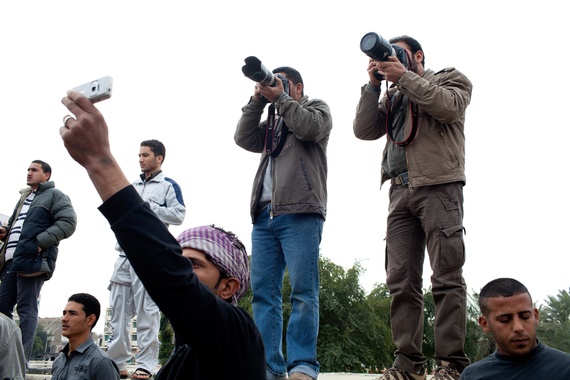 I'm concerned about freedom of speech because it's my job, but it also concerns everybody else in general. When you put a journalist in danger, it means that before him, a whole chain of people have been touched. When I was taken hostage, the place where we were held, there were 13 other people who were not journalists. There was one journalist for 13 citizens. Journalists are only the visible façade of a repression that touches everybody else before it comes on us. -- Journalist Florence Abuenas.

The Universal Declaration of Human Rights was adopted by the United Nations on 10 December 1948 and today is the day to celebrate that achievement. As part of this powerful document -- Article 19 of the Declaration states:

Everyone has the right to freedom of opinion and expression; this right includes freedom to hold opinions without interference and to seek, receive and impart information and ideas through any media and regardless of frontiers.

In our interviews with foreign correspondents, editors and publishers, we learned of reporters who don't have the liberty to leave their countries and whose work has placed their lives on the line: Luis Najera, exiled to Canada for his work on the crime beat in Ciudad Juarez, Mexico. Omar Fekeiki, Iraqi youth turned fixer turned reporter for a major Western newspaper. Mikhail Beketov, brutally beaten to a virtually speechless state, left for dead for daring to question a construction project in suburban Moscow. Their stories, among others, reveal the deep price paid for reporting.

Over the years that we worked on this documentary, the murder, kidnapping, imprisonment and malicious prosecution of journalists continued unabated. Meanwhile, in the Western mainstream media, bald-faced fabrications, illegal tactics and plagiarism have eroded journalism's integrity, while the high courts have targeted both investigative reporting and the very tools we all use to communicate and publish.

The tragedy of these scandals is that they foster an acceptance of impunity. As the recent Committee to Protect Journalists report on U.S. press freedom noted, "Journalists from other countries pointed out that hostility by the U.S. government to the news media can be damaging to press freedom elsewhere."

The outrageous prosecution of respected journalists in the highest courts and the inhuman detention of bloggers in our prisons further erode public trust for the business of news while widening the scope of censorship to include all who dare commit acts of journalism. In countries like Egypt, Iraq, Mexico and Russia, such laws have long been tools of oppression, as have frequent kidnappings and the occasional beating or beheading.

Impunity exists when police fail to investigate a journalist's murder. It looms over the murky business of kidnapping, allows physical and psychological torment to go unchecked. Impunity is a state of danger in which most reporters now live -- if not in fear, at least with a nervous glance over their shoulders. Journalists are the public face of these human rights abuses. Every reporter snatched, beaten, falsely imprisoned or killed represents dozens of average citizens facing the same horrific fate.

If all of us have the ability to be citizen reporters, as citizens we must raise the standards by which we ingest information. We must demand that our lawmakers respect and protect the act and ethics of reporting rather than get bogged down in defining who or what makes a reporter.

As we reflect upon the meaning of a day to respect Human Rights, we must insist on justice for all of those who have been killed, for those who are still held captive and for those under threat, merely for their efforts to stand up for basic rights, efforts to build a civil society in which we all benefit.