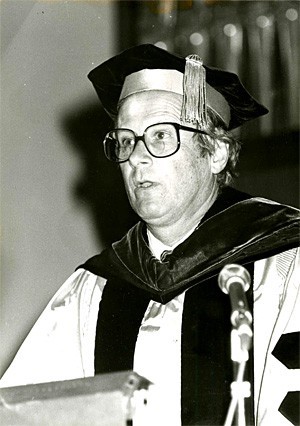 He was a brilliant scholar who focused on the Middle East and whose books were widely read by Arabists. His son Steve would later play for the NBA champion Chicago Bulls and then become coach of the Golden State Warriors and lead them to a championship in 2015 and break the record for most wins in a regular season in 2016. Malcolm Kerr grew up in Lebanon, on and near the campus of the American University of Beirut (AUB), where his parents taught for forty years. He returned to the U.S. and went graduated from high school at the Deerfield Academy in Massachusetts and later got his Bachelor's from Princeton.

After teaching at UCLA, he moved to Cairo and in 1965 published his book The Arab Cold War. He became President of AUB in 1982, in the midst of the Lebanon Civil War. U.S. Ambassador Frank Meloy and Economic Counselor Robert Waring were assassinated in 1976. U.S. Embassy Beirut was bombed in 1983 and the Marine Corps barracks were attacked just a few months later. Sadly, Kerr would also become a victim to the violence: On January 18, 1984, he was shot and killed by two gunmen outside his office. He was 52.

William A. Rugh was in Beirut doing Arabic language study; he later served as Ambassador to Yemen from 1984-87. Philip C. Brown was Cultural Affairs Officer in Algiers, Algeria in 1970-1972 when he first met the Kerr family. George Q. Lumsden was Ambassador to the United Arab Emirates (UAE) from 1982-1986 and went to school with Kerr. He recounts the events that led to Kerr's assassination. All were interviewed by Charles Stuart Kennedy, beginning in March 1996, January 2012, and January 2000, respectively.

You can read about other Moments on the Middle East.

"He was one of the best friends the Arab world could ever had had"
William A. Rugh, Arabic language study, Beirut, 1964

RUGH: Relations with the United States were excellent. That was what we believed at the time. Maybe it was a bit starry-eyed in the sense that we were talking to friendly factions and we weren't sensitive enough to the discontent of Shiite groups and others who were becoming more and more disaffected. But as far as we knew, Lebanon was a successful experiment in pluralism.

I remember very distinguished scholars such as Malcolm Kerr writing that Lebanon was a model for harmony among different social groups and we believed that. It was a society that was very friendly to the United States. The 1958 crisis with the American intervention, direct military intervention, seemed to have been a successful use of American military power to help stabilize the situation. Of course, we found out later that doesn't always work.

But at that time, in 1964, the American University, AUB, was a very positive factor. Later it became faction-ridden and had a lot of political difficulties. The American University Hospital was considered the best in the Middle East. The American official presence was considered benign and benevolent by most people. Of course, in those years there was a wave of Arab nationalism led primarily by Nasser, in Egypt, and to some extent people in Lebanon were reflecting that and feeling that.

BROWN: One of the most interesting American families we met during our stay in Algiers was the Malcolm Kerr family. He and his wife I think were on a Fulbright scholarship traveling through North Africa when they stayed with us. Malcolm Kerr eventually became President of the American University of Beirut; he was a very astute student of the Arab world and one of the best friends the Arab world could ever had had... 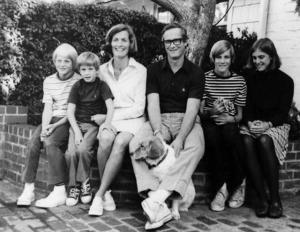 Among their children was a son named Steve, who went on to become a National Basketball Association star with the San Antonio Spurs....We knew him when he was just a little kid, running around that big house we had in Algiers. (The Kerr family in the mid-1970s at their home in Pacific Palisades, Calif., from left to right: Steve, Andrew, mother Ann, dog Hoagie, father Malcolm, John and Susan. Photo: Ann Kerr)

"Coming to grips with this took me quite some time"
George Lumsden, Ambassador to The United Arab Emirates (UAE), 1982-1986

LUMSDEN: I will now embark on an interesting story. 1983. The Christmas-New Year's season arrived. The intelligence community in Washington, through Mossad, the Israeli intelligence service, and their good infiltration into Lebanon immediately following the Kuwait embassy bombing, noted the first rising of Shia radicalism because the Shias had been fairly lethargic up to the point.

Under the aegis of the Iranian ambassador in Damascus, a hardliner named Hashi Mupoor, the southern Lebanese Shia were being organized away from the Islamic Jihad group to form a new, pure Shia group which is known as Hezbollah. This would have been in '83. We know how that has developed.

They picked up that the Kuwait embassy bombing was step one. Step two was to be the assassination of a major American figure in the Gulf, an ambassador. Not only that, they were going to get a French ambassador, too. France for obvious reasons of its own interest was very happy that the Iraq tilt was being worked out. France had flown [Ayatollah] Khomeini back to Tehran and didn't get anything for it. Plus, they had a lot of interest in Iraq and still do.

I didn't know anything. I find that armored limousines are being flown from Washington to Abu Dhabi (I didn't have an armored car) and that special American bodyguard details from the State Department are coming to live with us because the intelligence said that the best target was Abu Dhabi and the French and American ambassadors there were the targets. They knew the weapons that they had, the serial numbers, the silencers. The whole smear came through the intelligence community.

So, wow! Here we are. Christmastime. My kids are visiting from college. The American security moves in. The halftrack [a civilian or military vehicle with regular wheels at the front for steering and continuous tracks at the back to propel the vehicle and carry most of the load] gets parked in the driveway. A platoon of UAE infantry digs in around the residence. My ability to move about the country becomes very, very inhibited.

We get the kids out as quickly as we can. Helen and I have to go out to be trained on how to use an Uzi and a .38 caliber, the whole smear. We have that in our room and we have U.S. security agents sleeping outside our door. It's not so much fun with these kinds of things.

[The French ambassador] got the same thing. They made him wear a bulletproof vest everywhere and he looked ridiculous. I had it on once and said, "I just can't do this."

They all packed around me when we went in a building for a meeting.

This is a bittersweet story. Nothing happened. New Year came. New Year went. We were now into January 1984. All this tension was still there. About the 10th of January, the signal came through and they left. The local government knew the group was there. However, they hadn't done anything.

The UAE government was very afraid to apprehend all these people that had the Iranians' backing when they hadn't done anything or demonstrated any malicious intent. But the security wall apparently convinced whoever was orchestrating this thing -- probably Hashi Mupoor -- that it wasn't such a soft target after all.

What happened? On the 1[8]th of January, the President of the American University in Beirut, Malcolm Kerr, was assassinated. The bullet markings jived with this group. We became a hardened target.

They said, "We've got to get a prominent American who's gettable." They got Malcolm Kerr, who I had seen in Abu Dhabi fundraising for the American University of Beirut about three months before. 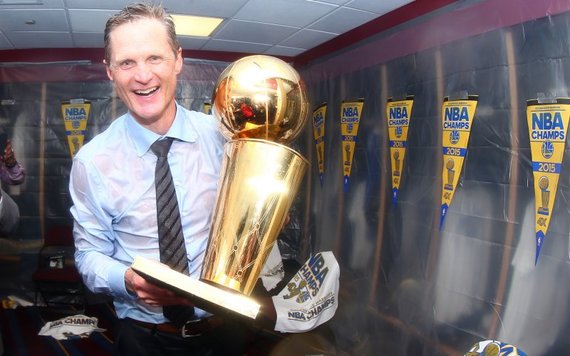 Now, it gets really bittersweet. Malcolm Kerr I had known since he was 13 years old. He was a class behind me at Deerfield Academy and was a class behind me at Princeton University.
Coming to grips with this took me quite some time. I have only recently begun to speak about this situation. Through roommates and things I have just tried to figure out when, if ever, I should talk to his wife and son about this particular incident. Maybe somebody has told them.

As an extra added postscript, the son involved is a young man named Steve Kerr. Steve was substitute point guard for the Chicago Bulls-Michael Jordan dynasty. You may have seen him on television. I think he's out of the League now, but that is just apropos of nothing except my interest in sports...

I haven't told many people this story. Actually, it's sort of a catharsis for me to get rid of some of this stuff.