In April on CNBC, I called a top in the China market and urged a move to cash. The accompanying chart -- see the red arrow -- underscores the prescience of the call. It also validates the idea that the stock market is a leading indicator of the economy as China's economy continues to slow 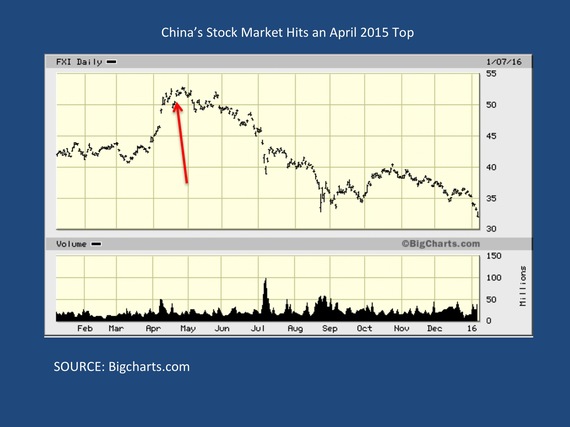 China's underlying problem is structural. It depends too heavily on export-led growth and its two biggest customers, the US and especially Europe, are growing at rates well below historical norms.

The current rout in the Chinese markets ironically is being exacerbated by the efforts of the Chinese government to stem the market's fall using "command and control" trading halts with relatively small triggers. Panic now rules the Chinese stock markets as investors seek flight from Chinese markets that are tightly restricting such exit.

The stock market panic is being amplified by wealthy Chinese increasingly nervous about a communist, Mao-style crackdown on "the rich" well under way under the guise of corruption probes. Dozens of executives and government officials have already disappeared or been detained in the crackdown, including several billionaires - Zhou Chengjian and Guo Guangchang to name a few.

As a result, many of the wealthy are desperately trying to cash out their investments and convert yuan to foreign exchange. This is causing downward pressure on the Chinese yuan, which has fallen precipitously to its lowest level in years - with no end in sight.

The yuan is likewise under further pressure because of the slowdown in the Chinese economy. Foreign exchange speculators clearly understand the trend for the Chinese currency is down and speculation adds to the pressure.

In response, the Chinese government has been burning through its reserves at a rapid pace to prop up the yuan - predictably with little success as market forces almost always overwhelm exchange rate interventions.

Hammer Blows Around The Globe
China's woes are a hammer blow to the US economy, primarily because of the falling Chinese currency and a collaterally rapidly strengthening US dollar. 2016 is likely to see a flood of artificially subsidized Chinese goods dumped onto US markets - with the steel industry at the tip of China's mercantilist spear.

China's woes are also a signal that commodity nations like Australia, Brazil, Chile, and Canada that ship massive amounts of coal, copper, iron ore, and soy beans to China are likely to be hurt as well - further depressing global import demand and growth. Russia will likewise be dealt a further blow from reduced Chinese demand for Putin's oil and weapons systems.

The most dangerous element of this crisis may not be financial but geopolitical. Chinese President Xi Jinping may soon become, like Barack Obama in the US, one of the most disliked sitting leaders in the world in his home country. Xi's anti-corruption campaign has antagonized China's elites and entrepreneurial class. His restructuring of the Chinese military is antagonizing key officers within the People's Liberation Army. And a slowing economy is created massive labor unrest.

Don't be surprised if Xi is removed within the next several years - or mysteriously dies of a heart attack or in some "accident." He is presiding over what is turning out to look more and more like the Titanic, the natives are restless, and no doubt there are more than a few within the Party ranks seeking to play Cassius or Brutus to Xi's Caesar.

In such a fugue state, a "wag the dog" scenario in which the Chinese Communist Party tries to rally its citizens by attacking Japan or the US is not out of the question. Yes, China is America's largest trading partner and has as much or more to lose from conflict. However, when civil unrest push comes to possible military coup shove, rising Chinese nationalism and the CCP's desire to preserve its own power may trump economic sense.

Stay tuned. There's no soap opera like a Chinese soap opera; and another period of insanity like China's Cultural Revolution may well be around the corner.

Peter Navarro is a business professor at the University of California-Irvine and author of Crouching Tiger: What China's Militarism Means for the World. www.crouchingtiger.net