Last Friday - as Barack Obama and John McCain launched into what was clearly going to be one of the most watched and potentially important debates in this Presidential Campaign, I settled in with my family, dog, and a beer to watch on my living room flat-screen.

It wasn't quite a boxing match, but we decided to make a party of it.

Quickly, I had my Macbook Pro out - and was following along on the web. Facebook, CNN, HuffPo, Fox News, MSNBC - then I settled on election.twitter.com. Great stuff. Noisy. Opinionated. Real Time.

Before long my younger son was reading over my shoulder. At first silently, and then reading out loud. He was announcing the debate in real time - reading twitter comments like a side show barker. It was infinitely entertaining. After a bit, Murray said: "Dad, I can't stand it, I have to make a comment."

Hmm... a dilemma. I've got a twitter account, and followers and such - and I wasn't sure what he was going to write. And frankly, I've been accused enough times of being a 10 year-old that I didn't want to actually have a 10 year-old posting under my name. Even if he's a super smart 10 year-old whose grown up on political debate.

So, ever the wise father - I said no. No posting on Dad's account.

Fine. He wasn't deterred. He went to his computer - set up in the living room - and set up a twitter account on the spot. Moments later he was online, with a avatar photo of our family dog, he was in the mix. He commented, started some debates, and had a great time participating in both the conversation and our Democracy.

So, what to make of this? Well, a lot I think. First, for a 10 year-old to be able to listen, read, respond, and debate politics in a room of adults (or at least some adults we assume) is a very cool thing. Secondly, the old adage "on the internet, no one knows you're a dog" is never more true. Murray is a smart kid for sure - but he's a kid. It does make you remember that there's no identity on the web -and that things are not always as they appear. And finally - the emergence of a participation based media eco-system is here. CNN is embracing twitter - as well they should. Because really, at the end of the day, this is the interactive TV world that we've always imagined. With people watching and interacting with both the community and the content.

This is the era of Twitter TV. And it's a good thing. 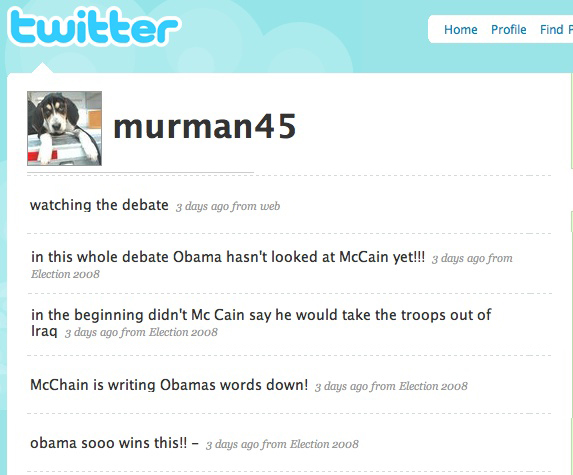