The quest began when Steven L. Pease was second in command (Executive Vice President and COO) and the only non-Jew at REDI, then the largest provider of real estate information in the United States. Rather than feel outnumbered or jealous of his coworkers, Steve marveled at the way Jews produced so many talented businessmen. His interest was piqued. Was it something Jews are born with, that creates so many Nobel Laureates and high achievers in every field? Or did it have something to do with Jewish values and culture? 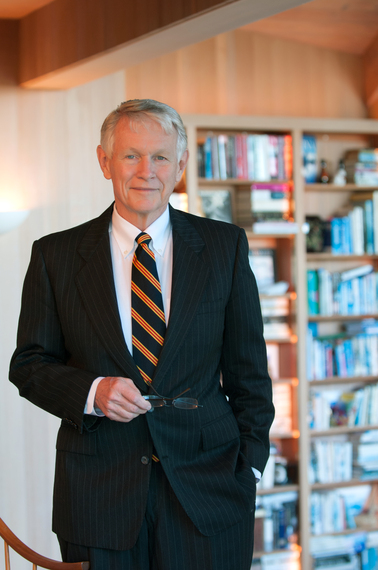 So what is it that makes Jews, only two-tenths of one percent of the world population, win, for example, 23 percent of all Nobel Prizes? For Steven Pease, it comes down to culture. Not completely. There are other factors. But culture is a big one. (Photo courtesy: Steven L. Pease)

Here is my interview with Pease:

VE: Lawrence Harrison comments that cultural changes must be led from the inside. Doesn't this idea kind of doom those from the "wrong" cultures? Does this mean that people like Thomas Sowell and Ben Carson, who dare to buck cultural norms, will always be in the minority? Why study Jewish achievement then, if it is a feat that cannot be repeated large-scale?

Steven L. Pease: No, this idea does not "doom" those from the "wrong" cultures. Cultures are malleable. We can be shaped by different cultures, by conscious awareness, and by self-determination. Think of the U.S. Marine Corps. Raw recruits come from all races and backgrounds. Within six months, they are shaped in ways that will affect them for the rest of their lives. Think of what Hitler did over six years and all the horror than came from that change of cultural values.

In the U.S., as you suggest, Ben Carson is very interesting. He was largely shaped by a loving and demanding single Mother with only a 5th grade education who insisted that he study, read and make something of himself. He did as a neurosurgeon at Johns Hopkins, one of America's leading teaching hospitals, and now a candidate for President of the United States.

Might one have to be an outlier? Might people individually or collectively need to shape (or "nudge") our own cultures? Yes, perhaps. But that is what the Boy Scouts and Girl Scouts did for generations. That is what many religions try to do. It is what the Sabras did in Israel. What Larry Harrison and I are both saying is that the healthy--even bourgeoisie--values are the ones that appear over long periods of time to generate successful cultures including: The Golden Age Dutch, the 17th and 18th century Scotts, the offshore Chinese, the Mormons, and etc.

It takes an effort but nothing worthwhile doesn't. Victimhood coupled with a sense of entitlement usually dooms a group or a person as certainly as a life with no challenges.

VE: You cite David Brooks' piece in the New York Times, All Cultures are Not Equal, which talks about how some lines of research may no longer be considered acceptable, as they are now "impolite to pursue" and how "genuine academic inquiry" can today become the "basis for charges of racism and sexism." Do you think that's what happened with Tim Hunt? Can we realistically address the issue of underachievement in certain sectors if we refuse to factor in race? Can we realistically address the issue of Jewish (or Asian) overachievement without examining the underachievement of certain sectors?

Steven L. Pease: [The] Tim Hunt [controversy] is a superb example of the tyranny of political correctness and overreaction. It shows the remarkable vendetta of the offended when an offhand comment, likely intended as something of a self-effacing joke, is taken to be horrific discrimination. The resulting penalties were then wildly disproportionate to the offense.

There are genetic differences between groups of people and between individuals. Tay Sachs is much less likely for a non-Jew and Sickle cell anemia is less likely for non-blacks. Males who grow to a height of nearly 7 feet are likely to be better at basketball than I will be at 5'10".

VE: Statistics suggest that the age of Jewish hyper-achievement is winding to a close. Do you think intermarriage or looser definitions of Who's a Jew could be diluting the sample? If we looked at a more strictly defined sample, might it be possible that Jewish achievement is, even more so, breaking records?

Steven L. Pease: I think the answer has to do with the particular versus the general. That is, in part, disproportionate Jewish achievement may be in decline because of a diminished percentage of Jews in the world population: (today, 2/10ths of 1 percent the percent versus 4/10ths of 1 percent in 1945). The performance is also likely to have been diminished--not so much by the growth of secular Jewish populations as by assimilation in which some Jews no longer identify with and retain the strong cultural values and do not pass those values on to their offspring.

Further, many Jews may be less motivated to drive themselves in the way they have over the last 200 years which were shaped by the Jewish Enlightenment (Haskalah), Napoleon's Emancipation, and etc. Last, I am concerned that the relative declines in the numbers of Reform, Conservative, Modern Orthodox and Secular Jews versus the Ultra-Orthodox will significantly diminish the performance. We know Reform, Conservative, Secular and Modern Orthodox Jews graduate from college at rates from 59 to 65 percent. America's average is 28 percent. The Ultra-Orthodox average is 25 percent and yet Ultra-Orthodox kids are reportedly more than 70 percent of Greater New York's school age Jewish youth. That demography seems inevitable.

With all that said, there will still be many high achieving Jews who do remarkable things. It is just that they will be ever fewer in numbers and collectively their positive effects on all of us will be significantly less than we have had over the last 200 years. That is a shame--our loss, so to speak.

VE: Eric Hobsbawm in Benefits of the Diaspora writes, "A certain degree of unease in relations between Jews and gentiles has proved historically useful." Considering the ADL says there was a 21% increase in anti-Semitic incidents in the U.S. in 2014, why is Jewish achievement falling?

Steven L. Pease: I think Hobsbawm was making the point that tension drives us more than comfort and ease. We respond to challenges, and perhaps even more to those which threaten our very existence. For 2,000 years, Jews have faced anti-Semitic threats and those helped shape their culture in important, almost Darwinian ways (the vital importance of family, of individual skills, education, autonomy, entrepreneurship, etc.). Thus the threat and adversity helped contribute to a positive outcome.

Today's growth of anti-Semitism is relatively recent and has arisen in an era of remarkable Jewish achievement, economic success and, until the last few years, ever reduced anti-Semitism in Europe and the U.S. Perhaps all of that has contributed to reduced academic results. Perhaps it has also been shaped by the growth of Jewish and non-Jewish emphasis on "social justice." But I do not think there is much doubt that the academic performance has recently been in decline.

VE: Your focus on Jewish achievement appears to be based on the idea that if you could only pinpoint the reasons for this achievement, it might be possible for other sectors to make use of the formula. If I might say so, this is an intelligent idea! Would you elaborate on your conclusions here? 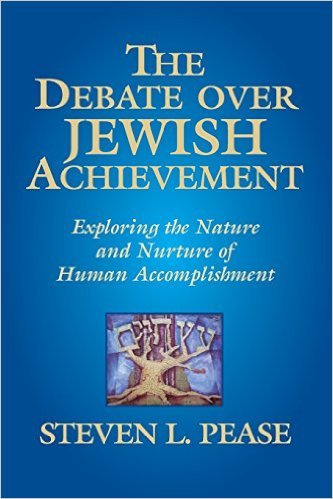 Steven L. Pease: Yes you are spot on in your surmise. It is what Obama might call "a teaching moment." I would [note] that other cultures share many of the same or similar important cultural values. We can learn from them as well. But over the last 200 years the most dramatic example of these values and the group with the most astonishing record of performance has been the Jews.

And as I have said, when I look down the list, there is nothing really uniquely Jewish in any one of those cultural values. The blend may be unique, but the ingredients are not and most of them are shared with other groups.

VE: What's next for Steven Pease?

Steven L. Pease: First I am expecting to have the opportunity to spend a good bit of time talking about The Debate (and The Golden Age) over the coming year or so. I am also hoping The Debate gets some ink and air time that might encourage a much wider discussion and recognition of the importance of culture and what we and others can do to nudge our cultures in positive ways.

And of course, Russia still takes lots of my time [Pease is Co-Chairman of The U.S. Russia Foundation for Economic Advancement and the Rule of Law (USRF)] and I don't spend nearly enough with my wife, grandkids and pets!