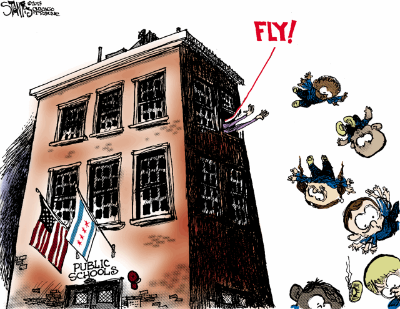 The Chicago Tribune, as part of its "A New Plan of Chicago" program, hosted a panel debating the merits of school choices and charter schools.

Four panelists, each with a different viewpoint on the issue. It made for a very spirited debate.

In Chicago the problem of school choice is cyclical. Charter schools were formed to give disadvantaged students a better opportunity at getting accepted into and then graduating from college. But critics of charters say in the process charter schools also have destroyed neighborhood public schools by siphoning off the best students, leaving the schools to struggle to meet achievement standards. By attempting to solve one problem and get more students prepared for college, they say charter schools have adversely affected other public school students.

Yet even Brown, who is a proponent for neighborhood public schools, is not entirely against charter schools.

For full coverage of the event, including a video stream, check out the link to Reboot Illinois' website here.