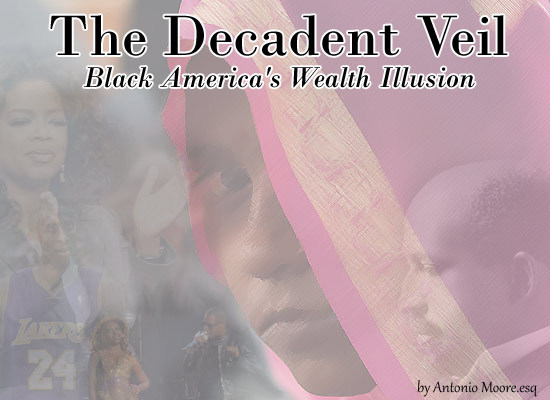 I write this piece following the ground work laid by W.E.B. Dubois's Veil of Double Consciousness. The veil he described was a visualization of the racial duality blacks take on as part of their American identity. I now undertake the daunting task of clarifying the new veil of economics that has covered the struggles of a generation. The decadent veil looks at black Americans through a lens of group theory and seeks to explain an illusion that has taken form over a 30-year span of financial deregulation and new found access to unsecured credit. This veil is trimmed with million-dollar sports contracts, Roc Nation tour deals and designer labels made for heads of state. As black celebrity invited us into their homes through shows like MTV cribs, we forgot the condition of overall African American financial affairs. Despite a large section of the 14 million black households drowning in poverty and debt the stories of a few are told as if they represent those of millions, not thousands. It is this new veil of economics that has allowed for a broad swath of America to become not just desensitized to black poverty, but also hypnotized by black celebrity. How could we not? Our channels from ESPN to VH1 are filled with presentations of black Americans being paid a king's ransom to entertain. As black celebrity has been shown to millions of people, millions of times, the story of real lives has also been lost, and with it the engine that thrust forward the demand for social justice by the masses. The heartbeat of social action is to recognize your mistreatment, and demand better. With each presentation of Kobe Bryant's 25 million dollar a year contract, or Oprah's status as the sole African American billionaire a veil of false calm is created within the overall American economic psyche about the immense black wealth disparity. Young black men from ghettos across America that used to dream to make great changes in racial inequity now just dream to be a millionaire and be like mike and dunk a ball or dance on a stage. The decadent veil not only warps the black community's vision outward to a larger economic world, but it also distorts outside community's view of Black America's actual financial reality.

A black family in the 1 percent is worth a staggering 200 times that of an average black family. If black America were a country we would be among the most wealth stratified in the world.

It is because of this concentration of wealth that any view of averages is destroyed for black America, the disparity between rich and poor is too high. When a few families have a massive percentage of wealth it pulls the average up so astronomically that it makes the mean present a false narrative. The key in this kind of stratification is to look closely at the median and understand its real world impact. 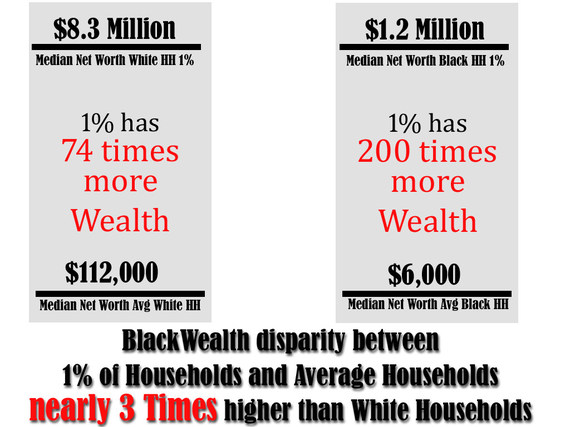 Looking more closely at the numbers according to MSNBC the Grio Black America is a mere 1.4 percent of the Top 1 percent of households. That means only 16,400 black households of the total 14 million black families are in the top 1 percent. Yet based on the regularity with which media flaunts young black men signing million dollar sports and music contracts, and the frequency with which they display fabulous videos with African Americans in expensive cars and houses you would think a larger percentage of us were rich.

The sad truth is that added together all black households are worth a mere $1.4 trillion of the $80 trillion of total U.S. household net worth. A group that is 13 percent of the U.S. population and built one of the the wealthiest countries the world has known as slave labor controls less than 1.75 percent of that country's household wealth. With a massive amount of the small slither in the hands of a small black elite. According to the Pew Research Study, 35 percent of Black households have Negative or No Net Worth. Another 15 percent have less than $6,000 in total household worth, that's nearly 7 million of the total 14 million black households that have little or no security.

The veil created by mass media, sports organizations and our own psyche in Black America is one of safety through presentation. It is an inversion of the same model implemented by Dr. Martin Luther King so many years ago, except where Dr. King instilled global empathy by showing images of Bull Conner's disciples water hosing black teenagers. Instead NBA commissioner Adam Silver hands black teenagers million-dollar deals and ESPN then projects that as a normal image of black life across the globe creating apathy for Black America's truly dire financial straits. This all being shown despite there being a prison rate amongst young African American males that is higher than we have seen in any modern society in history. While media projects Beyonce signing a Pepsi $50 million ad campaign throughout the World Wide Web, the fact that single Black mothers across America have a median net worth of a mere $5 dollars falls in the shadow of the singularity of her financial success.

Even though their numbers are infinitesimal in comparison to the whole of Black America the 21st century million dollar black celebrity's image has grown to a point of normalcy in homes across the world. So much so that the lives of those struggling financially in urban centers across America have become overcast by the projection of these larger than life individual brands. The issue is our veiled mask glazed with decadent trim has in many ways hidden the true consequence of our historical scars. Without that veil removed, we project progress that has not yet occurred, and in doing so perpetuate an illusion that may in the end destroy us all.

"To be a poor man is hard, but to be a poor race in a land of dollars is the very bottom of hardships." W.E.B. Dubois - Souls of Black Folks