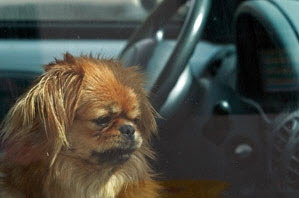 If you think it's common sense to not leave a dog inside a parked car, tragic headlines from just the last few weeks tell us this life-saving caution is still not common enough.

On June 11, a German shepherd died after being left in a car with its windows rolled up in Staten Island, New York.

On June 26, a Chihuahua died of heat exhaustion from being stuck inside a car in Santa Fe, New Mexico.

And on June 29, a 3-year-old English setter died in Wausau, Michigan after being left in a car with windows rolled up for more than two hours. According to local police, the temperature of the window glass was 121 degrees, even though the day's high temperature was 79 degrees.

These stories add to the thousands each year of animals suffering and succumbing to heatstroke in unattended vehicles. The circumstances behind each case may be different, but the avoidable causes are the same, and all point to a single conclusion:

Never leave an animal alone in a car.

Mild weather can seem deceptively safe, but it is not. In less than 30 minutes, the temperature inside a car can rise more than 30 degrees higher than the temperature outside. This is true even if car windows are cracked open or the car is parked in the shade. Dogs can't cool themselves down as easily as we can, and once they overheat, they can suffer serious organ damage and die.

In Tennessee last week, a new law took effect that will expand a Good Samaritan law to allow people to lawfully break into hot cars to rescue animals in danger. The law previously only applied to saving children. The ASPCA spearheaded a similar law in Washington State empowering law enforcement to rescue animals trapped in hot cars. That law will go into effect later this month.

Even though most states don't have laws specifically addressing pets in hot cars, know that leaving a pet in a hot car can potentially be a violation of anti-cruelty codes in any state.

If you see an animal alone in a hot car, please:

To help prevent this kind of cruelty -- and make no mistake, leaving an animal in an unattended car on a hot day is indeed cruelty -- share this flyer with friends and family. Keep some in your car, so you can offer it to anyone you see traveling with a pet. And talk to your veterinarian about displaying it in the waiting room.

The ASPCA also created a shareable infographic to help you spread this vital message online.

If you can influence just one person to leave a dog at home, you may be saving a life. 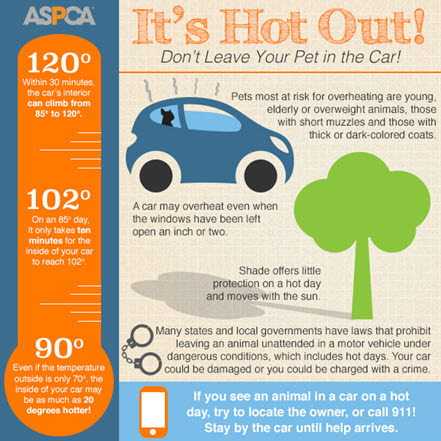