The hard-charging international barrister Amal Alamuddin recently married a movie star and changed her name to Amal Clooney, reigniting the age-old feminist debate over whether or not a woman should change her name upon marriage.

My decision to change my name came down to a simple majority vote conducted among my bridesmaids in the car on the way to my rehearsal dinner.

At the rehearsal, my uncle had asked how he should announce Nicholas and I at the end of the ceremony. I stood there paralyzed before finally admitting I still hadn't decided. Suddenly, my friends and relatives were weighing in from the audience.

The vote wasn't because I didn't take the decision seriously. Quite the opposite. I was a newly minted Women's Studies minor and whether or not to change my name seemed like the most serious decision I would ever make.

In fact, I came very, very close to calling off the engagement altogether after a serious fight with Nicholas over the issue. I had been battling the the pros and cons for months when I approached Nicholas with the perfect solution.

We would create a new name!

After all, it didn't bother me that I was changing my name. A name change seemed appropriately symbolic for this new phase in my life. I was changing everything else -- my relationship status, my independence, my living arrangement, my location -- so why not change my name as well?

What bothered me was that I was the only one changing my name.

I was taking his name. I was losing my identity as Sarah Lyn Stewart, while he got to maintain his. Where was the fairness in that? We were entering a committed relationship as equals so why was I the only one indicating that change to the outside world by changing my name?

So, here was the perfect solution. We'd create a new name! I even had one picked out. A professor at our liberal arts university had combined his and his wife's last names and I loved the ideas so we could do the same. The "H" from Holland and the "art" from Stewart to form Hart. Plus, how perfect that it sounded like heart!

I made my pitch to Nicholas.

He balked. I was devastated. Hours of fighting came down to one simple point. He wasn't asking me to change my name so he didn't think it was fair for me to ask him to change his.

It was a fair point. If he wasn't asking me to change my name, what was the issue anyway?

I had talked about whether or not to change my name with my college mentor and women's studies professor. She hadn't changed her name and never regretted it. She even had an insanely common name that led to all manner of mix-ups and clerical errors. Still, she said she never even considered it.

However, she had also recently had a child when the issue had arisen all over again. In fact, that was one of my main problems with not changing my name. It seemed like you just delayed the debate until you had kids.

I strongly disliked it when women who had kept their last names automatically gave the children the husband's name. Something about that set very, very badly with me. After all, you carried the baby, you birthed the baby, then you had to spend the rest of your life explaining that they were yours without the easy societal indicator of the child's last name. NO. WAY.

My professor had decided to hyphenate her child's name, which seemed on the surface like a great idea for any future children. Of course, the reason I decided against hyphenating myself is because I am WAY too lazy (or efficient?) to spend precious seconds of my life writing out an insanely long last name. It seemed unfair to curse my future children to a fate I didn't want for myself.

Plus, what were they supposed to do when they got married and had children? Keep hyphenating forever? I didn't want to merely gift my indecision to the next generation. Thinking about generations is ultimately how I came to make peace with following the vote of my bridesmaids and changing my name.

Not only of future generations but past generations, which I had recently started thinking a lot about thanks to a new found interest in ancestry. I couldn't even begin to imagine how complicated my research would be if everyone had thrown caution to the wind and started making up the name-changing rules as they went. Sure, the practice of a woman had some troubling and patriarchal history, but -- let's be honest -- so did marriage itself and I was still entering into that institution willingly.

After all, I felt confident that other women in my family felt sad to leave their last names behind like I did but followed the pull of societal rules just the same -- at least I'd be in good company. Truth be told, I have a conservative streak. I believe in the rules of society, and, while I think improvements can always be made, I follow a more pragmatic than revolutionary approach.

In the grand analysis, I decided the pros of changing my name outweighed the cons. I purposefully kept my maiden name and use all three professionally. I also get VERY angry if addressed in person or otherwise as Mrs. Nicholas Holland. The day of our wedding my new husband and I were announced as Sarah and Nicholas.

I've been Sarah Stewart Holland for over a decade now and I've built a new identity surrounding that name of which I am very proud. Not to mention, in one instance, changing my name changed the course of my life. Law school sections at my school are assigned alphabetically. As a Holland, I was in Section 2. Had I remained a Stewart I would have been in Section 4. While I know the people of Section 4 to be perfectly lovely, I cannot possibly imagine my life without the friendships I formed that first hard year with Goo, Harper, Halliday, Holz, and Israel (who have all since changed their names -- go figure.)

I tell my story to say a lot of thought (and drama) went into my decision and I'm assuming the same for Amal Clooney. She deserves the benefit of the doubt and not to have her very personal decision turned into a feminist debate.

This decision to change your last name isn't an easy one -- no matter how famous that name may be. 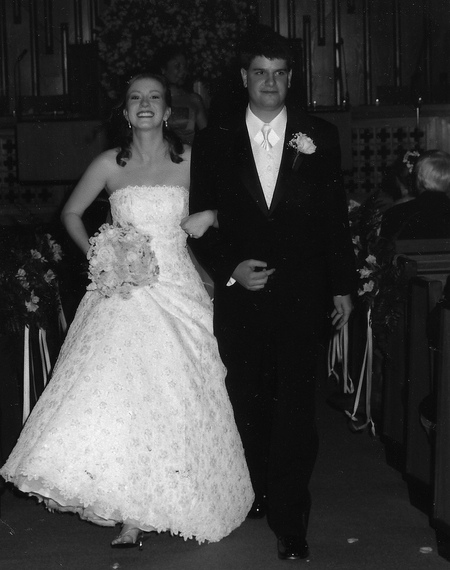 Want more from HuffPost Weddings? Visit us on Pinterest!