Not everything went smoothly for the World Bank during the first two rounds of global consultations to gather input from civil society groups and affected communities. When the World Bank Board of Directors initiated the second round of consultations by releasing the first draft of the new environmental and social framework, civil society organizations were outraged by the apparent dilution of protections. There were protests in Brussels, Washington, and Manila opposing the draft, while groups that were invited to consultations in Peru walked out in the middle of the process. CSOs were unhappy with both the content of the first draft and the way consultations were handled.

Now, as the World Bank prepares to release a second draft, there is heated discussion among its Board members. On June 24th and July 1st, World Bank Executive Directors convened to discuss the new draft and approve it for a new round of consultations. The only statement made public from those meetings is from the United States government. On July 16th, the USG issued a three page statement pointing out the deficiencies of the new draft. The statement indicates the U.S. is worried about how "the more risk-based approach" proposed will work in practice. The statement also raises serious concerns "that the draft ESF could place greater implementation burdens and costs" on borrowing countries, especially for riskier projects. Instead, the U.S. statement indicates that reliance on borrower's own systems should be delayed for the first five years of the new Framework, and requests greater clarity on the proposed approach to using borrower frameworks as well as a clear division of the roles and responsibilities of both the Bank and borrowing countries generally. This echoes calls from civil society organizations and affected communities. 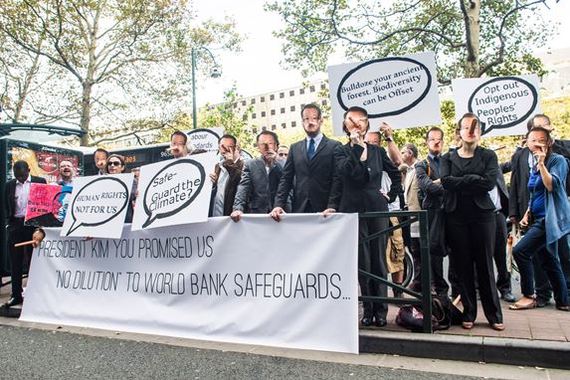 The USG further requests that World Bank Management publish a complete implementation plan for the new policies, along with budget information. The statement reads: "The U.S. requests that Management provide as soon as possible a comprehensive and costed implementation and monitoring plan detailing: (1) internal World Bank accountability structures, staffing, training, and incentives; and (2) borrower support and capacity building."

The new proposed policies of the Bank are going to apply only to investment lending, which currently is about half of the Bank's overall portfolio. In its public statement, the USG points out the need for covering the Bank's entire portfolio with environmental and social safeguards, saying: "U.S. believes that the World Bank should adopt coherent, consistent, and appropriately tailored safeguards approaches across its three main lending instruments and, as needed, other World Bank activities with significant environmental and social risks such as technical assistance."

The U.S. representative seems to have been one of the few Board members speaking out loudly on the need to strengthen the human rights language in the vision statement of the new policies. This is also reflected in the public statement, which reads: "The U.S. agrees with Management's proposal to proceed with a third phase of consultations, but notes that it would have been preferable to release the second draft ESF with clearer language in the Vision Statement on human rights."

The USG also calls for robust and inclusive third phase consultations on the latest draft of policies. Civil society organizations have also asked for meaningful consultations and a meeting with management before proposing the new consultation plan to address shortcomings from the previous two consultation phases. However, Bank Management has so far dodged requests to meet and discuss the next consultation phase with CSOs.

The World Bank is expected to release the new draft of its environmental and social safeguard policies publicly in the next few days, along with their plan to engage in a new consultation cycle with different stakeholders. At this stage, it is unclear how long this process is going to last and moreover, how the World Bank Board will resolve its deep divide.