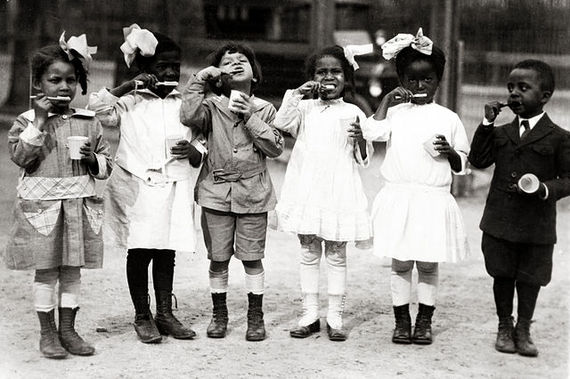 "The children of the despised and rejected are menaced from the moment they stir in the womb..." -- James Baldwin

In our schools, playgrounds and pools, America has a problem with Black children. And it is costing them their lives.

Last November, Tamir Rice, a 12-year-old boy in Cleveland, was gunned down by a police officer responding to a 9-1-1 call reporting "a guy" in the park with a "probably fake gun."

Just one and a half seconds after arriving and without warning over his vehicle's megaphone, police officer Timothy Loehmann shot and killed Tamir. That the gun, a plastic air-soft gun, was probably fake was never communicated to the police. That he was a child was never articulated to or by Loehmann. That he was Black was.

As Rice lay dying, his 14-year-old sister rushed to be by her brother. She was tackled to the ground, handcuffed and placed in the back of the police vehicle.

Last Saturday, Kalief Browder, a 22-year-old Black man from New York City, died by way of suicide. At 16, Browder was sent to Rikers Island -- New York City's most infamous jail complex -- a facility that holds up to 15,000 people, many unable to make bail, as they await trial.

Browder was sent to Rikers for allegedly stealing a backpack, an allegation for which he never stood trial. Instead, he spent three years in jail. Almost two of the years were spent in solitary confinement. Allegedly, he was frequently subjected to psychological and physical abuse at the hands of inmates and guards. Browder refused plea deals on the basis of his innocence.

Three years into his terrifying ordeal and amidst increased media scrutiny, the charges were dropped. Once released, Browder had great difficulty recovering from the trauma of his imprisonment, frequently recreating the conditions of his incarceration at home. On June 6, he hung himself out of the back window of his mother's home.

Just one day earlier in McKinney, Texas, Dajerria Becton, a 15-year-old, bikini-clad guest at a pool party, was violently thrown to the ground and pinned down by Officer Eric Casebolt. When other teenagers approached their friend, Casebolt unholstered his gun and turned in their direction. Casebolt was responding to a call about an incident at the pool. Upon arriving, the video evidence, filmed by a white teenager, indicates that Casebolt only addressed the Black teenagers, even allowing what appeared to be a white civilian to assist in his detainment of the teens.

These seemingly unrelated stories are inextricably linked through the span of American history in the ways in which the bodies of Black children have been exploited, dehumanized and policed through the centuries. This manifests in a justice system, which is supposed to protect the rights and vulnerabilities of children, that is 18 times more likely to sentence a Black child as an adult. It also manifests in a public that accepts institutionalized racism in our formal institutions and reinforces it through the litany of inequalities inherent American society.

A 2014 study, published in The Journal of Personality and Social Psychology, found that Black boys are widely dehumanized, perceived as older and more likely to face "police violence if accused of a crime." The researchers argue that dehumanization is the denial of full "humanness" and the subsequent denial of human protections. Historians of genocide assert that dehumanization is a necessary preconditioned for "culturally... or state-sanctioned violence" against against any racialized or Othered group.

The dehumanization of Black children has been a pervasive, yet underexplored theme in American history. Throughout the slave period, Black children were regularly separated from their parents and sold to other plantations -- both their childhood and humanity were denied in the face of a racial capitalism that valued only their value as a commodity and source of labor. Their productivity on the fields was often held to the exhausting and inhumane standards of Black adults, themselves cruelly and savagely exploited for every ounce of labor their bodies could produce. Under these conditions, questions of justice and punishment were usually settled outside of the court system, by slave-masters, willing to be cruel in their designs but always with a mind to protect their financial investment.

The end of the slave period saw the end of the slave-master as police. Two institutions, one social, another state sanctioned filled the void for violence: lynching and the judicial system. Between 1882 and 1927, at least 3,500 Blacks were lynched in the United States. As the renowned historian, Manning Marable wrote in his landmark book, How Capitalism Underdeveloped Black America, lynching was not limited to Blacks, but statistics do indicate that between 1918 and 1927, 92 percent of all victims were Black.

Women and children were not shielded from such acts of popular violence. When a murdered Black sharecropper's pregnant wife intended to press charges against her husband's killers, an angry mob accosted her, hanged her from a tree, lit her on fire, and with a knife "ripped open the abdomen in a crude Caesarian operation. Out tumbled the prematurely born child. Two feeble cries it gave -- and received for answer the heel of a stalwart man, as life was ground out of the tiny form." In this instance, both a woman and child were subject to vicious injustice of a lynch mob. Not even a newborn child was safe or innocent in the eyes of the murderous crowd.

By the 1940s, such forms of anti-Black violence began to submerge as anti-lynching campaigns, demographic shifts, and popular opinion made such forms of mob injustice less practical. Still, lynching never completely vanished. The most notable exception was the savage murder of Emmett Till, a 14-year-old killed in 1955 Mississippi for reportedly whistling at a white woman.

As lynching waned "racists began to rely on the state apparatus to carry out the battle for White Supremacy." And still, Black children were not shielded from institutionalized racist violence. Take for example that the youngest legally executed American, George Stinney Jr., was a 14-year-old Black boy. Stinney was accused of the murder of two white children in South Carolina. His three-hour trial, held without witnesses or physical evidence, led to his conviction for murder, largely based on a coerced confession.

In 2014, Stinney's conviction was overturned. That Stinney was tried as an adult and executed at the hands of the legal system was unprecedented. Unfortunately, Stinney's case would not be an anomaly, but serves as an indication of how deep-rooted racial inequality toward children in the judicial system exists.

Decades later, the racial disparities in the criminal justice system remain stark. A 2005 report by the criminal justice think-tank The Sentencing Project, found that Black defendants are afforded less legal assistance and considerably harsher sentences than "comparably situated" white defendants. Furthermore, Black defendants are more likely to be sentenced to death than white defendants for similar offenses, and the severity of their punishment is often increased if the victim is perceived to be white.

A 2014 report published by Columbia University indicates that these disparities around punishment exist not just in the criminal justice system, but also in our schools. By examining data from New York City and Boston public schools, the researchers found, for example, that Black girls "are subject to discipline that is harsher and more frequent than that of their white peers, and are six times more likely to be suspended than white girls." They also uncovered that "reported misconduct by Black girls at school prompts a seemingly disproportionate -- and often violent -- response by school and local authorities."

The general criminalization of Black children, extends beyond the courtroom and the reaches of the lynchmob, but into the minds of many Americans. In our nation's classrooms, where children spend most of their time, teachers subjectively interpret misbehavior based on racial stereotypes and are more likely to "label Black students as troublemakers." Based on these stereotypes, Black students are more likely to be disciplined harshly by teachers and administrators. These stereotypes endanger Black children in many settings, be it the classroom where they encounter harsh discipline, the judicial system where they are cruelly and unusually sentenced, as they play with toy guns in public parks, or as they attend suburban pool parties where they are aggressively mistreated by officers of the law and civilians alike.

That institutional racism exists is not to be denied. That it informs our perceptions of justice is borne out by the data. That it permeates the very social fabric of America is manifest in our attitudes. These problems are to be considered and addressed with the utmost seriousness. There are many costs for these great injustices, not the least being the lives of children.

When Dajerria lay, face first in the grass, with a police officer's knee in her back, we witnessed the denial of her childhood. Perhaps Kalief Browder's words belong here: "I lost my childhood, I lost my happiness."