Why read literature? Will it make one a more lively cocktail party conversant? Perhaps. But more often than not, reading literature for a living proves hazardous to one's mingle potential.

In fact, David Palumbo-Liu, the Louise Hewlett Nixon professor and director of Comparative Literature at Stanford University, cautions that mentioning literature at a cocktail party often induces others to scan the room for an alternate conversation partner, ostensibly someone more attuned to our global age of digital information and data.

Confronting such dismal odds at popularity, Palumbo-Liu wagers an intrepid claim: Reading literature might well prove a key guide for cohabiting with the multitude of different humans, whom Web 2.0 now delivers ever deeper into our own lives.

That literature offers itself as a vehicle of empathy and potential ethical guidance is a claim as old as Aristotle; that literature, in its increasingly disruptive multimedia forms, might allow a "transnational ethical thinking" is a novel idea. The Deliverance of Others: Reading Literature in a Global Age explores how reading literature can become a progressive ethical action in a world that promotes instantaneous sharing of "selves."

In his newest book, Palumbo-Liu continues his previous work on race, political economies and literature, which he explored in Asian/American: Historical Crossings of a Racial Frontier, The Poetics of Appropriations, and as editor and co-editor of several other books including Immanuel Wallerstein and the Problem of the World: System, Scale, Culture. 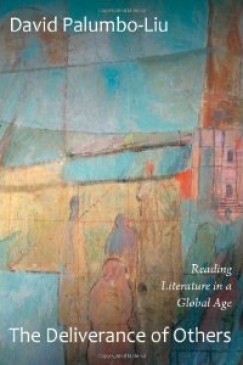 While Palumbo-Liu affirms that the title The Deliverance of Others retains a "strong biblical air and tradition," he also deploys the term "deliverance" in a technological sense as he investigates the "systems of delivery," including literature, that bring cultures in contact in this newly interconnected world. Though readings of novels by J. M. Coetzee, Nadine Gordimer, Kazuo Ishiguro, Ruth Ozeki and Gary Shteyngart, The Deliverance of Others offers political and aesthetic reflections on the global age and interrogates received conceptions of rationality, the family, the body, and human capacities for emotional connection.

To illustrate the interpenetration of economies and cultural difference, Palumbo-Liu frames his literary analyses with a discussion of Larry Summers' infamous World Bank memo of 1991, in which Summers suggested the First World deserved to send its trash to the Third World because people in the former could be expected to enjoy a better quality of life anyway. When Brazilian minister of the environment, Jose Lutzenberger, responded to Summers' reasoning as "perfectly logical but totally insane," he grasped the salient factor of globalization: that rationality itself may work contrary to ethics. Indeed, pronouncing such an insight cost the hapless Brazilian minister his job.

While the First World continues to devise ever more rational ways of delivering its products to the globe, far-flung cultures are also penetrating the First World. For Palumbo-Liu, literature, "inexact, open and excessive in generating meaning" offers a corrective to the steely logic of global markets "as it uncovers and helps articulate the changing nature between self and other" (92).

Focusing on modern literature that highlights technological and global exchange, The Deliverance of Others also describes uniquely modern situations of political and social transformation: A world struggling with the legacies of colonialism and Apartheid, where former colonial subjects now "draw attention to themselves not simply as abstract political objects of identification, but as real, embodied human beings," (67).

Such an embodiment resists easy comprehension in a world of new political economies of organs, tissues, and genetic materials. A provocative chapter entitled "Art: A Foreign Exchange," explores how the human body -- dead or alive -- has become a lucrative quarry of spare parts. Organ transplantation now delivers others' body parts (often from the Third World to the First) into one's body, transforming the traditional definitions of sovereign flesh and self.

Literature illustrates this collapse of traditional borders between the self and body, often using disruptive styles and mixed media. Ruth Ozeki's films and novels offer an example of such interpenetration of forms, cultures and flesh -- human and animal. Palumbo-Liu concludes with a text that juxtaposes a traditional diary narrative with text messages. American writer Gary Shteyngart's Super Sad True Love Story, a novel set in a near-future dystopian New York, explores the ill-fated love affair between Lenny, a middle-aged Jewish-American and Eunice Park, a young Korean-American, who struggles with the demands of retail culture as well as her traditional family.

The Deliverance of Others asks readers to consider the order in which Lenny and Eunice's relationship devolves:

"Emotions, yearning, data: Affect, passion is declared, then intensified and made active, only to bow in expressive and indeed affective power before that which is truly significant -- data," (193).

As data reigns supreme in the totally administered society where Lenny and Eunice live, Shteyngart's literary dystopia raises the question of whether different outcomes are possible. Surely the world of Web 2.0 offers no simple panacea. Its forms of communication are new, but the logic of commerce blocks the Web's many roads to participation. As formerly disenfranchised groups hope to gain equal footing with those in the First World, the latter still own the means of production. Inequalities persist stubbornly and ever more openly in the digital global age. "There is no level playing field," Palumbo-Liu argues. "All networks, open as they are, have an endpoint," (186).

Literature can help negotiate this "endpoint" of economic interests and differences, if it elicits readers' empathy toward other life experiences. The Deliverance of Others claims this empathetic experience as both primary and imperative. Rather than asking whether such knowing of differences is at all possible, Palumbo-Liu's book asserts reading as a self-reflective act "that puts ethics before epistemology,"(196).