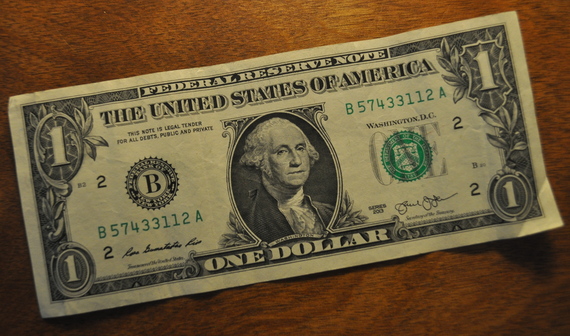 On this Americans agree: There's too much money in politics, and it's eroding our democracy.

A recent poll (New York Times, June 2, 2015) reveals 85 percent of Americans believe we must either make "fundamental changes" or "completely rebuild" how campaigns are financed.

The United States can no longer claim to be democracy. Instead of one person, one vote, it's now one dollar, one vote. A 2014 Princeton University study concludes: "Multivariate [statistical] analysis indicates that economic elites and organized groups representing business interests have substantial independent impacts on U.S. government policy, while average citizens and mass-based interest groups have little or no independent influence."

In plain English, elected representatives no longer listen to ordinary Americans, only to those with big bucks.

Corporate money has commandeered legislative processes at all levels of governance: international, national, and state. At the international level, multinational corporations secretly write "free trade" pacts such as the Trans-Pacific Partnership (TPP) and then ram them down our throats via "Fast Track" legislation that circumvents full congressional oversight.

Since the push for "free trade" in the mid 1970s, millions of American manufacturing jobs have disappeared, and the U.S. trade deficit has grown from zero to $600 billion per year.

Worse, as economist David Korten writes in YES! Magazine (June 25, 2015), these "trade" laws "strengthen corporate rights at the expense of human rights, democracy, economic justice, peace, and the healing of the Living Earth." Everyone loses, except the multinationals.

In an April 21 op-ed "Obama's Republican Collaborators," conservative commentator Patrick Buchanan asks: Why would Republicans, who have fought Obama tooth and nail on every issue for 6 years, suddenly "kiss the royal ring" to give Obama Fast Track authority? "Fast track is the GOP payoff to its [corporate] bundlers and big donors," Buchanan admits.

At the national level, the disastrous Citizens United Supreme Court decision of January 2010 further undermines democracy. By granting "citizenship" and "free speech" to corporations, the Supreme Court allows those corporations -- including foreign ones -- to spend unlimited sums of money to influence elections. As a result, the billionaire Koch Brothers, fossil-fuel moguls, have pledged $900 million -- nearly half the total $2 billion spent in the 2012 presidential election -- to effectively buy the outcome in 2016.

The Koch Brothers' values are not our values.

The values of the wealthiest Americans are out of sync with those of ordinary Americans, another academic study reveals. And the greater the wealth, the more warped those values become. The authors conclude:

... these distinctive policy preferences may help account for why certain public policies in the United States appear to deviate from what the majority of U.S. citizens wants the government to do. [This] raises serious issues for democratic theory.

Corporate influences also distort democratic process at the state level. In the Commonwealth of Virginia, for example, Dominion Virginia Power, an electric utility, holds such sway over the legislature that it's frequently called Virginia's "shadow government." Because of its powerful influence, Dominion, a private corporation, can invoke eminent domain to take property from landowners for pipeline rights-of-way, such as the proposed Atlantic Coast Pipeline. The pipelined natural gas will almost certainly be shipped abroad, profiting Dominion handsomely while leaving Virginians only with hazards and environmental destruction.

How may a private company take property from hundreds of citizens for its personal gain? "Dominion is routinely the biggest corporate donor to [state] politicians," giving more than one million dollars to politicians and their causes in 2014-2015, according to the nonpartisan Virginia Public Access Project.

America today is an oligarchy, the result of a slow corporate coup d'etat forty years in the making. It began with a memo written by the late Supreme Court Justice Lewis Powell and titled "Attack on the American Free Enterprise System." Powell, a board member of Phillip Morris and ardent defender of tobacco companies in numerous lawsuits, perceived capitalism as under threat from communist, socialist, and fascist elements in America's media, churches, and academia.

Written confidentially to the U.S. Chamber of Commerce just before Powell's appointment to the high court in 1972, the memorandum sketched a road map for protecting and furthering no-holds-barred free enterprise. It advocated "constant surveillance" of media and textbook content and, like McCarthyism, the purge of left-wing elements. When Washington Post columnist Jack Anderson discovered the memo in 1973 and broke the story, he exposed an entirely different threat: Powell's memo outlined how corporations could undermine democratic process to further their narrow goals.

We are now battling for the soul of America, with Powell bearing one flag and Anderson the other. But one thing is clear. Powell's army is winning.

Most of the GOP and probably half the Democratic Party have sold out to K-Street, Wall Street, and the big banks. The Koch Brothers and other ultraconservative corporatists have been immensely successful in bending the will of America toward their bidding through the establishment of right-wing think tanks such as the Heritage Foundation, astroturf political organizations like the Tea Party, and lobbies with innocuous names and nefarious aims such as the American Legislative Exchange Council (ALEC) and Americans for Prosperity (AFP). To gain some inkling of the insidious influence of ALEC on congressional delegates, view ALEC's slick new video, provided here with the truth superimposed.

America nears the culmination of its long slide into fascism, which Mussolini defined as the merger of state and corporate power. Salvaging our democracy at this point will require a triple-pronged offensive: 1) a national grassroots political movement to counter corporate dollars with massive people power, 2) comprehensive campaign finance reforms, including the repeal of Citizens United and "moving from large-dollar private funding to small-dollar public funding" as advocated by Harvard's Lawrence Lessig, and, ultimately, 3) the election of incorruptible representatives.

Given the task before us, Bernie Sanders is the best person by far to emerge from the vast field of presidential contenders.

All Republican candidates immediately disqualify themselves by their denial of the climate crisis, a de facto pre-condition for Koch Brothers' funding.

Unlike President Obama, who abandoned the grassroots that elected him, Sanders is less interested in the presidency per se and more interested in building a lasting and effective political movement. Unlike all other candidates including Democrats Hillary Clinton and Martin O'Malley, Sanders refuses to form a SuperPAC or, to date, to accept corporate donations. Finally, unlike Clinton, who is cozy with Wall Street in general and Goldman Sachs in particular, Sanders opposes the TPP, would reinstate the Glass-Steagall Act, would break up big banks, and would institute a transaction tax on Wall Street.

Democracy in America is on life support. If we don't soon rally en masse to its defense, corporate interests will pull the plug. Sanders is the only candidate to fully realize what's at stake, to tell the truth, and to articulate what WE, the People, must do.