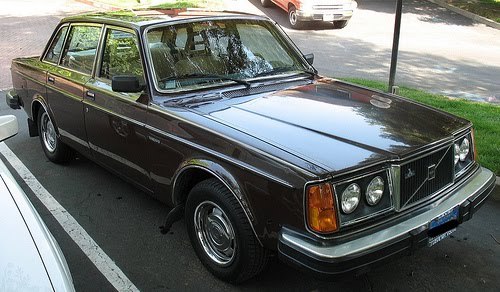 On the morning of November 3 2004, I was alone in my apartment getting dressed for my first day at my new job. Two LAPD officers knocked on my door.

"Your vehicle has been in an accident..."

It was then I found out The Democrat was dead.

The Democrat was my nickname for the brown box of a car that I had been driving for 6 years. I bought it for $500.00 and then paid another $500.00 to have a re-built engine put in. In my hometown of Santa Cruz, this is the type of car that would have the back end plastered in bumper stickers emblazoned with "You Can't Feed Children With Nuclear Arms," "Think Globally, Act Locally," and a couple of Jerry Bears. Hence the name, The Democrat. In car conscious Los Angeles, you are judged by your vehicle. I was likely judged to be a community college liberal arts teacher who didn't shave her legs. I was not. I was just cheap.

The police walked me down my Korea Town street and across Wilshire Boulevard. As we walked, one of the officers explained that a new Honda had been stolen in Glendale, leading the CHP on a high-speed chase through downtown. The Honda had then exited the 110 and taken the chase onto surface streets, at speeds up to 90 miles per hour. The Honda then struck another vehicle head-on in the intersection near where my car was parked. The Honda then spun around and slammed into The Democrat, dragging it halfway down the street where they both came to rest, straddling a large utility box.

I resisted the urge to ask which route this guy took from downtown during rush hour that was traffic-free enough to get going that fast. It took me 20 minutes to drive six blocks at this time of day. Did he take Venice all the way? Olympic? How do you catch air on Pico? Instead, I asked how the people in the other car that had been hit head-on had fared.

The officers told me that the driver and passenger both had serious injuries but were conscious and seemed like they would make it through. The thief had also been taken to the hospital, and he too was expected to make it. I would be contacted in the next few weeks about having to appear at his arraignment since my car had been involved as a victim of a crime. When we got through the crowd surrounding the blocked off intersection, I saw my car. She was totaled. The twisted hunk of metal was barely recognizable as my Swedish sedan.

As I sat on the curb waiting to have the car towed to the junk yard, I realized that if my car had not been parked where it was, the Honda would have likely made the turn and kept on going, possibly injuring more people, or worse. The Democrat was a not a victim, she was a hero, and I her proud owner, had 40 minutes left to figure out another way to get across town to West LA for my first day of work.