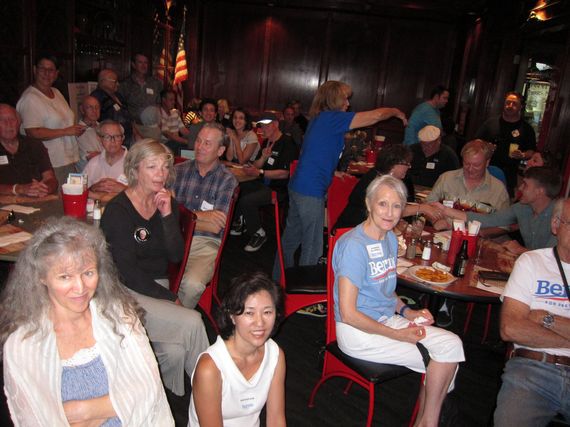 Just moments before the debate started, I talked to a friend who was bemoaning the derivatives bubble. "Most people in this country don't know what's going on with derivatives. I'd like to see them ask the candidates about the fact that those who are gambling in the derivatives market get paid first when the bubble bursts."

"They aren't going to talk about that," I said. "Because if they do, it shows a lack of confidence in the markets, and as soon as you do that, it's like pulling back the curtain to see that there's nothing behind it." That will be the beginning of the next crash. And it's my guess that Wall Street can't have that happen until they've assured Hillary's win.

Questions I'd like to see asked (but I'm not holding my breath):
1. Do you support a 28th Amendment to the Constitution stating that corporations are not people and money is not speech, overturning Citizens United?
2. Do you support the labeling of GMOs? Would you remove Monsanto cronies from the USDA and FDA?
3. Would you stop appointing industry insiders to positions in the treasury, the military, and other positions of power?
4. Would you veto the Trans Pacific Partnership, even if it passed in the Senate?
5. Would you support an embargo on weapons to the Middle East?
6. Would you clamp down on H-1B visas? How?

After the debate.
Of course, Anderson Cooper didn't ask pointed questions like those listed above. The Commission on Presidential Debates won't allow it.

Who "won" the debates? It depends who you ask. If you ask people whose paychecks depend upon media organizations, you'll hear how Hillary won because she is likely to keep the same system of legalized bribery (oops, I mean campaign contributions) going. The networks and media industries win when SuperPACs can spend billions of dollars for advertising.

And Clinton used the gender card more than once to rousing applause.

If you ask Americans who won, they're likely to say that Bernie Sanders or Martin O'Malley gave us the most inspiring answers. Sanders boldly stated that he sees that a revolution is necessary to get rid of legalized bribery in Washington. O'Malley's closing statements regarded the civility and substantive nature of the Democratic debates in contrast to the name calling and mudslinging we saw at the Republican debates.

"After a series of earlier debates by Republican candidates who want to criminalize and deport immigrants, it was refreshing to hear a debate among candidates who represent the mainstream of public opinion on immigration -- a public that wants politicians to fix the broken system and legalize the status of those without documents."