According to Wikipedia, fantasy is a genre that uses magic and other supernatural phenomena as a primary element of plot, theme and/or setting. I bring this up because we've been hearing quite a bit about a "Democratic surge" lately, and this is a quintessential example of political fantasy. While there has been some tightening in several races -- a result of core Democratic voters returning to the fold that is typical as an Election Day approaches -- the "surge" is a complete fabrication, fed and encouraged by a mainstream media searching for an interesting plot line for this election. I understand their predicament: with such an overwhelming diversity of media options it's already hard enough to sell papers or get people to watch your program--or read your blog on polling for that matter -- but when you factor in an election outcome that was probably set in stone on Labor Day it becomes doubly hard. So don't believe any of the talk about a Democratic resurgence. Seven days from now the Republicans will win the House -- and probably the Senate as well -- with an historic sweep in this year's mid-term elections.

Recognizing this, Democrats and the White House have been trying to shape the expectations game. We've already heard pundits on this morning's news programs saying "yes the Republicans will probably take the House" but "it is not the wave they were looking for." Let's be clear: since World War II the House of Representatives has flipped parties only six times. On November 2nd it will flip for the 7th time. This is historic, and it may be the pattern for the foreseeable future since the last time it happened was fairly recent (2006). We may be in for a volatile period similar to 1946 - 1954; during that time, the House of Representatives flipped an extraordinary four times in eight years. Regardless, it is a misread of the environment to say that this is not a "wave" election.

By now, we've all seen more polling data than ever before. In some respect, this avalanche of data can be counterproductive: it is harder to see the big picture when we are focused on district-level polling data. We don't need to see more data on the generic congressional ballot or the perceived direction of the country to know the essential elements of the 2010 mid-term election. Here is a "no data" explanation of the key forces in this election:

The Middle of the Electorate

Independents are now a part of the GOP coalition, and for this reason Republicans will win big next Tuesday. OK, we now respectfully withdraw from our self imposed "no data" rule. At the end of the day, winning elections is about putting together a minimum winning coalition. It is all about getting to 50.1% (or, if you are Marco Rubio or Joe Miller, 40%). Neither Republican nor Democratic candidates can win just by holding "their" voters. That is why every political fight is about capturing the political middle while keeping as many of your core partisan voters as possible. Independents are the prize of every campaign and this one is no exception. According to a Rasmussen Poll released yesterday the GOP had a whopping 17-point lead over Democrats on the Generic Congressional Ballot among Independents.

The just-released Politico/GW University Battleground poll reinforces the idea that political Independents have moved solidly behind Republicans this year. As we have said in the past, Independents left the President and Democrats over the health care reform battle in the summer of 2009 and essentially never came back. Since then, their opinions have become entrenched. According to the Politico/GWU poll, 62% of Independents have an unfavorable view of the new health law. Two-thirds (66%) say the recovery legislation pushed forth by the President and Congress is not working. And nearly 7-in-10 (69%) say that they have less faith in government now than before Obama was elected. As we said last week, the President lost the political middle in the summer of 2009 due to two things: the launch of health care reform and unemployment hitting 9.5%. The Independent withdrawal from the Democratic Party -- and their subsequent attachment to the GOP -- has only accelerated and deepened since that time.

Call it frustration, call it deep concern or do as we do and call it "anger," but whatever name you ascribe to this sentiment, it is growing and it is providing the wind for this political wave. Anger about the economy and a lack of jobs continues to be the elephant in the room (or in this case the voting booth). The LCG Anger Index is increasing weekly as we move closer to Election Day. The current index stands at 263. Two weeks ago it was 261 and in August it was 259. It was 246 in May of this year. In 1994 the Anger Index was 245 and the GOP gained 52 seats. The following table is updated with the latest data from likely voter polling over the past two weeks. 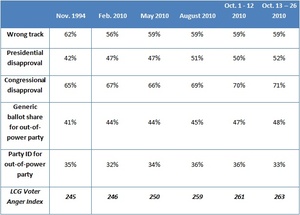 Next week we will update our House projections as well as provide a seat-by-seat prediction for the key U.S. Senate races.

The LCG Election Monitor is produced by the Lombardo Consulting Group. Thanks again to John Zirinsky and Peter Ventimiglia for their insights and contributions. For real-time reactions to events and more thoughts on the public opinion environment, please follow us on Twitter @lcgpolling.