This is the second installment in a three-part series on the Department of Justice, Google, and the Consent Decree. Read part one here.

A proper discussion of the benefits and limitations of the recent Consent Decree between the Department of Justice and Google, concerning Google's acquisition of ITA, needs to begin with a discussion of appropriate measures for potential harm to the competitive process and to potential competitors. The Decree attempts to ensure that current users of ITA's travel industry software will continue to have access to the latest revisions at commercially reasonable prices, and that Google will continue to invest in ITA's software rather than developing proprietary offerings for itself. Unfortunately, the Decree does not address the greatest danger, which is not that Google will deny competitors like Orbitz and Kayak access to ITA's software, but rather that Google will deny competitors access to the consumers that they all are seeking to serve.

What Form Could Harm Take?

Interestingly, the most offensive examples of potential consumer harm come from Microsoft's Bing, rather than from Google. Consider the following set of search results. I see four paid search results, still called "sponsored sites" instead of the more accurate and explicit "ads" label now used by Google. I always ignore ads on search, so I go to the first organic result, which is nicely highlighted with a huge basketball. 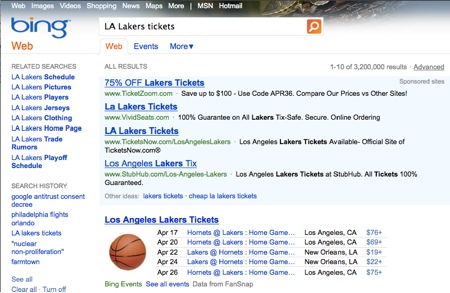 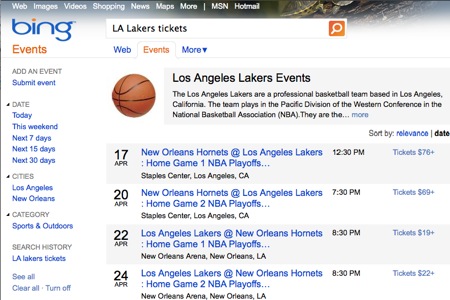 ... I can buy Lakers tickets without even leaving Bing. How convenient is that? Well, yes. And how what chance to competing ticket sellers have to reach customers? Notice that this site actually appears above the Lakers own site; is that the natural organic ranking? Do more customers historically buy Lakers tickets from Microsoft than from the Lakers? Will Microsoft offer this service to the Lakers without charge, now and forever? At its worst, hotels.com was charging hotels a 30% commission. If Bing imposes excessive charges on the Lakers, or on all basketball teams, it can do so in a way that will keep consumers happy; they don't see need to see these charges anywhere. But a high surcharge on distribution is a form of invisible tax, and it will be passed on to consumers. This is an example of a third-party payer mechanism; it is expensive, not subject to market discipline, and yet seems to improve consumer welfare because its harmful effects are quite invisible.

One click, top organic spot, should direct a great deal of traffic to Bing's ticketing agency. What faster and more convenient than having Bing's site come up after a single click? What about having it come up as the only response?

The first time I search for flights from Philadelphia to Orlando I am directed to an effectively integrated flight site, much as I was directed to the integrated site for Lakers tickets. But the second time I do the search the only thing that shows up in the search box, even before I finish typing the query, is Bing's travel site.

What if instead of Bing this had been Google, with its 65% of US market share and its 95% of EU market share? What could it do with this integration?

Surely, it could keep consumers happy, with convenience, among other things. And surely, it could grow its share. Then, it could use its market power to demand discounts, which it would share with consumers, much as hotels.com did. Ultimately, completing websites would lose importance, and indeed they might fail, further increasing Google's market power. Then, Google could demand excessive commissions, perhaps as high as the 30% commission once charged by hotels.com. Consumers would not complain; they would be receiving apparent discounts, discounts below hotels and airlines published prices. Indeed, consumers would be happy with the added convenience and lower price.

(1) Consumers are offered increased convenience at no visible cost to themselves and are happy.

(2) The competitive process is harmed.

It really would not possible for the hotels' and airlines' own direct distribution sites to compete, or for travel integration sites like Kayak or Orbitz to compete, unless consumers were willing to examine and compare the offerings of each URL separately rather than using search at all. Not only is there no limit to what Google could charge travel sites to "not be not found," which is the problem existed before Google's move into search; now Google would have a reason to hide some or all of these sites no matter what they are willing to pay.

Read the third installment of this series here.

Eric Clemons is the founder and Project Director for the Wharton School's Sponsored Research Project on Information: Strategy and Economics, within the Program For Global Strategy and Knowledge Intensive Organizations, which supports his research. Microsoft has recently agreed to participate in the Project. Nehal Madhani is an attorney in New York. Previously, he founded an online classifieds service for college students and advised small businesses and nonprofits on legal and strategic considerations.