By this point in time, rail-trail conversions are so commonplace that they really don't need more than a brief explanation on how they work. The name says it all: for the last three decades (give or take), we have transformed thousands of miles of old rail lines into recreational trails, based on the assumption that long-abandoned railways no longer serve any use as a means of transportation for freight or passenger trains, but they cut clean paths across a variety of landscapes, settlements, and varying topographies. So, in most cases, localized advocates partner with municipal, county, or state transportation/public works departments, as well as other interested contributors, and maybe even the owner of the railway, if that company still exists. Using a variety of funds--but often heavily dependent on public dollars--these initiatives take segments of the right-of-way, remove the rails and ties, then convert the space into a paved trail for runners and bicyclists.

While Michigan benefits from thousands of miles of recreational trails in rural or littoral settings, one initiative here in metro Detroit stands out as a quintessential example of a rail-trail conversion. Even the suburbanites that are most estranged from the Mother City (weak pun I know) have at least heard of the Dequindre Cut Greenway. 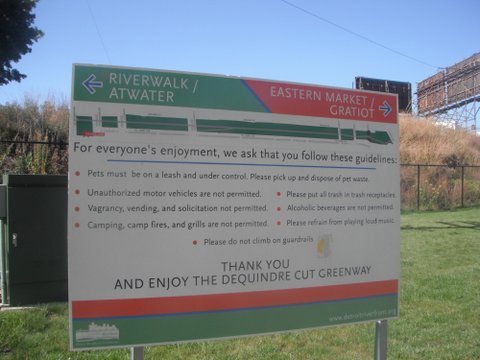 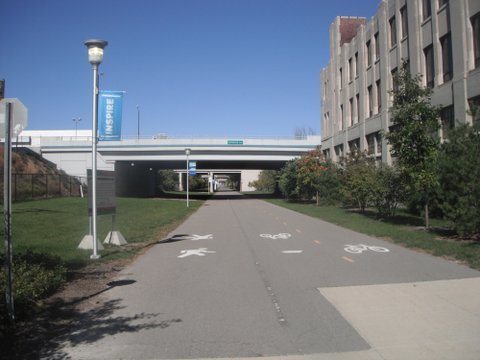 The "Cut" encompasses a below-grade line that, as a spur of the Grand Trunk Western Railroad, once connected suburbs like Royal Oak to the Detroit River. At its peak in the 1920s, it served hundreds of industries, and--this seems unreal to us now--as late as the 1970s, commuters could hop a train from Royal Oak and disembark within a quick skip to the Renaissance Center. By the 1980s, however, usage petered to an eventual abandonment. And a decade or so later, Canadian National, the railway that operated the Grand Truck Western at that time, sold this 3.5-mile segment to private interests that left it to rot.

Like most rail-trail conversions, nonprofit associations partnered with the government to rescue the line from its desuetude. The aforementioned article from Model D states that the Community Foundation of Southeast Michigan's Greenways Initiative paired with the state DOT and Michigan Natural Resources Trust Fund to fund the $3.4-million conversion, a project managed by Downtown Detroit Partnership, with an additional $2 million set aside for the Riverfront Conservancy to maintain it. When the initial 1.2-mile spur opened in 2009, the press hailed it for its improvement of an extensively blighted corridor populated by lurkers, transforming it from a dumpsite to a linear park. Thanks to its configuration below street grade, it offers its users a clean trajectory from Gratiot Avenue southward to the riverfront almost completely uninterrupted by cars. The vast majority of it looks like this-- 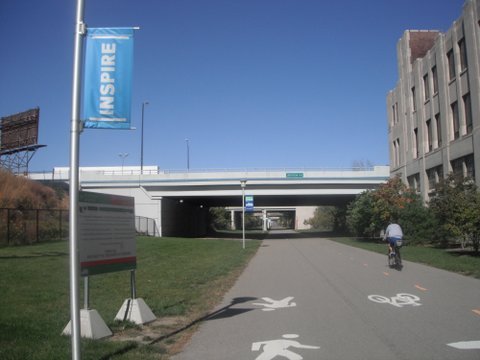 --a comfortably wide asphalt path, with clearly demarcated lanes for bicyclists and pedestrians, abundant lighting, emergency phone stations at regular intervals, and a grassy verge, particularly generous on the western side of the trail (the photos above are looking north). I've heard a fair amount of criticism lobbed at the design because of its limited access: the only ramps are at Gratiot (currently the northern terminus) and Lafayette Streets. But to me, the most problematic aspect of the Dequindre Cut's design is at the southern trailhead, right before it meets Atwater Street along the riverfront: 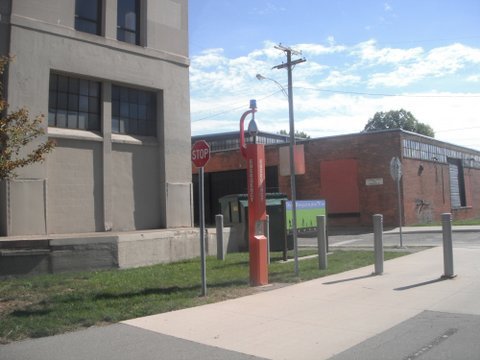 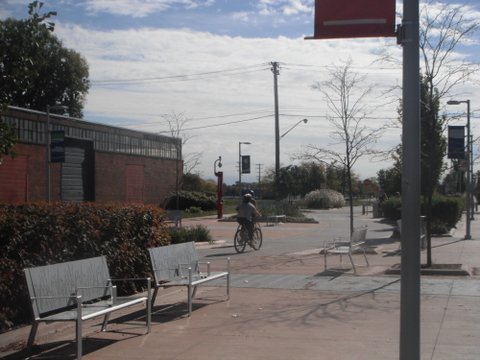 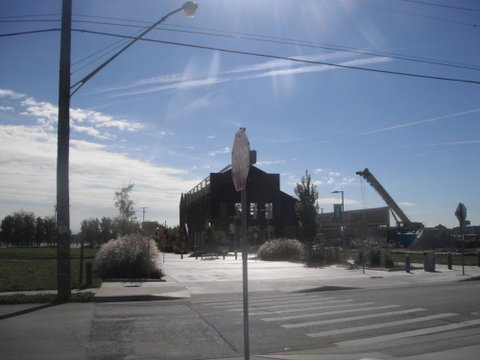 Back in the day, the railway probably bifurcated into several smaller spurs at this terminus, meaning the right of way is wider here than anywhere else. And the designers decided to craft this portion of the trail into a landscaped plaza with benches: not bad looking at all, but how well does it function? 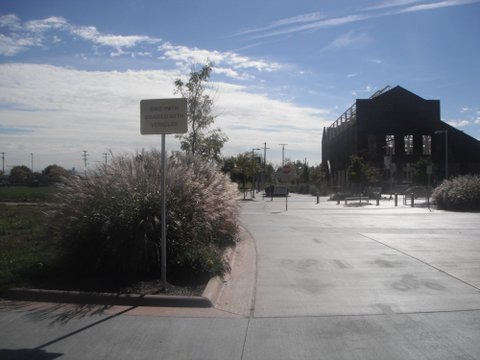 The sign on the left of the above photo offers a hint. The Greenway is a little less exclusive around here. 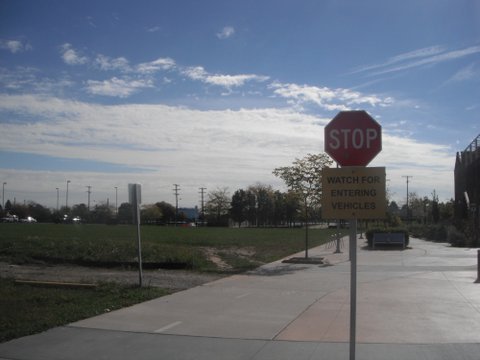 Though I have never seen the entering vehicles this sign admonishes us about, the path to the left proves that vehicles can reach the adjacent streets by driving across this portion of the Dequindre Cut. Perhaps this is a temporary condition--after all, the gravel drive isn't a dedicated street, and it may simply serve as construction vehicle access for the time being. But that doesn't explain the loopy design of the actual bike trail, which creates the lion's share of the potential conflict. 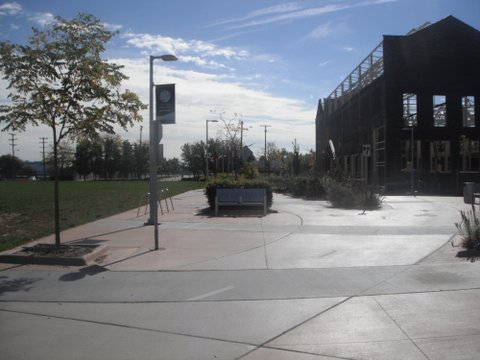 What's going on? Judging from the lane stripes, the bike path meanders and then forks. Any particular reason for this? 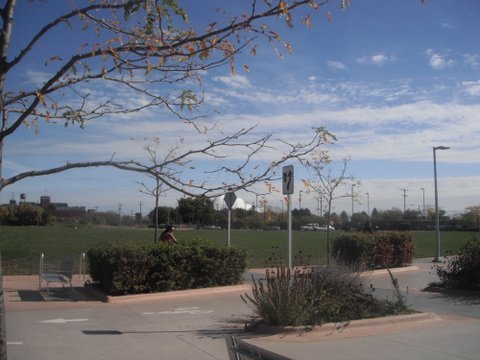 It only seems to generate confusion, as this bicyclist isn't even riding on the trail portion at all, but instead on some unmarked segment of the plaza, which, by default, must belong to pedestrians (or maybe those service vehicles). Here's a different angle that shows where the bicycle was going: 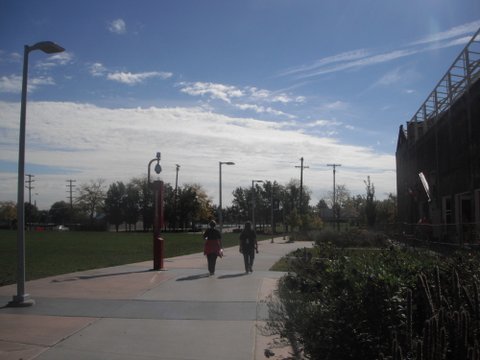 Frankly, it's a good thing our bicyclist didn't veer to the right-hand bike lane at that point where the trail splits: here's what she would have encountered: 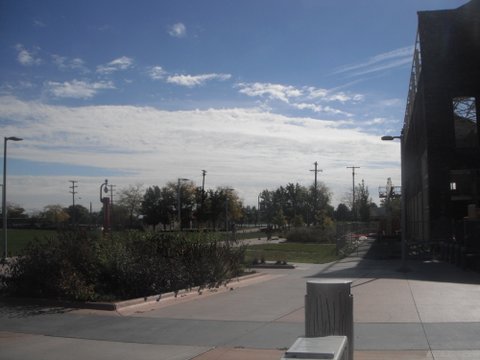 Smack into the gate of a construction site. Granted, that fence is undoubtedly temporary. But these photos nonetheless reveal the bewildering design of the path at this segment. It appears that the creators realized that the Dequindre Cut's right-of-way widened greatly at this termination point, and they decided to program the space with greenery and seating, while further capitalizing on the width by giving the previously straight bike line an elegantly sinuous path. It vaguely reminds me of the meandering of the pedestrianized Nicollet Mall in Minneapolis, where a vague appropriation of curvilinear streets (yes, the kind we associate with suburbs) helps to make amends for a surfeit of unused public space. Or, a bit closer to home, Campus Martius Park, which I blogged about for its over-reliance on programmed space a few weeks ago.

I could be splitting hairs with these criticisms. But I've already witnessed some near-collisions between pedestrians and bicyclists, neither of whom know what to do when their dedicated lanes intermingle multiple times in such a short space. Imagine a high-speed bicyclist unacquainted with the Greenway, forced to make a split-second decision when the pedestrians around him or her are equally confused.

This lack of clarity persists when approaching the Cut from the other perspective--that of a person trying to enter the trail from the river and headed northward. Here's what it looks like: 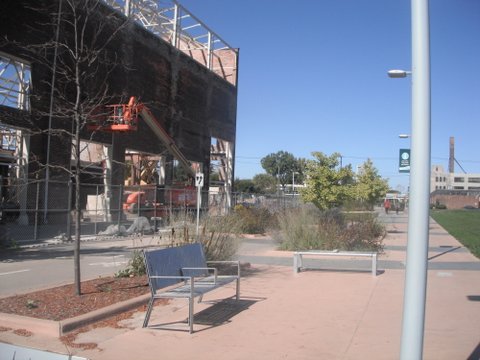 Jogging down the riverfront, I ran past it the first two or three times, then finally asked someone where it was. Better signage would help, but even then, it doesn't look much like a greenway trail. The installation of so much hardscaped plaza diffuses all visual indicators, so the Cut exerts less impact (and probably gets less use) than it otherwise would. 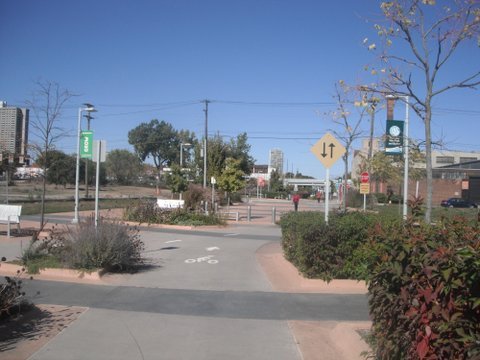 The criticisms are minor when considering the aesthetic and recreational benefits the Dequindre Cut offers. But it also makes me much more sanguine about the future, considering that the Phase II extension up to Mack Avenue currently underway gives designers plenty of opportunity to build the next segment superior to the first--as well as to provide a few more much-needed access ramps.

All photos taken by the author.