This spring, another New York legend is scheduled for demolition: Roseland Ballroom on West 52nd Street. When I first heard that another landmark building was going to disappear, I could only find comfort in the words of a wise friend who once told me, "Pay it no mind, Sugar. New York changes because it has to."

I came to New York in '92, a 22-year-old disenchanted, bullied, heartbroken gay boy from Colorado. I was one of those Midwesterners who came here on a bus with a few dollars in his pockets, in search of a few dreams: a new life, love and Madonna. I wanted to tell Madonna, "thank you." It was through reading about her in magazines that I learned about New York -- a paradise where people came to reinvent themselves.

The New York I first met was wild streets filled with the most colorful creatures.

When the night clicked on, it was Day-Glo hookers, howling queens and underground spaces in the Meatpacking District where gorgeous things danced in cages. Legendary places: Palladium, Jackie 6O, Club U.S.A, Save the Robots and Florent. These places are all now gone. And before that there were more. The first New Yorkers I met told me stories of other vanished places: Danceteria, Area, Paradise Garage. All gone.

So, yes, part of my friend's little saying is true; and now, in my 22 years of living here, I have seen it firsthand. New York changes.

And not always for the better.

I think the dorms where the Palladium once stood are nondescript, uninspired; the new NYU library destroys the once-impeccable vista of the arches over Washington Square Park; artful neighborhoods have been gentrified into suburbia. I've seen the cityscape shift in a battle between art and commerce. I've seen the unique relationship between art and wealth. The wealthy collect art and propel it into high places, however they do not always understand where art comes from, so often they destroy it. I'm picking on the wealthy, of course, and I'm generalizing, but wiping out New York landmarks to build high-rises is only a move toward a less beautiful place.

Sadly, Roseland will become another example of this.

Roseland Ballroom is special to me. On November 5, 2000, something happened in that theatre that changed my life for good. Back then, I was a wild and flaming creature, tipping through the streets in six-inch stilettos, spandex, fishnets, lipstick and a few sets of false eyelashes. A Queen. I had every kind of job a girl could imagine: VIP rope girl, DJ, table dancer at Lucky Cheng's. On weekdays I styled wigs at Patricia Field; weekends I danced on black boxes at Tunnel and Sound Factory.

I was a Queen with some dreams -- and a lot of unpaid bills.

One night changed it all. Walking to work at the Sound Factory, wearing cherry red pantaloons, lime green pumps and a crimson feather Mohawk, somebody noticed me. He asked me if I wanted a job sometime, and I said yes. Being in the habit of working odd jobs meant being in the habit of saying yes to everything. The guy told me to bring it to 239 West 52nd Street. So I did -- but I had no idea that my Midwestern dreams were about to come true.

That address on 52nd Street was Roseland Ballroom. The name in red letters on the marquee was Madonna. The security guard behind the velvet rope had my name on a list, and he let me and my bags of drag, feathers and glitter inside. I was a Queen who was prepared for a night of dancing on tables, swinging from balconies, landing in a trash can. I was hardly prepared for what was actually going to happen.

Inside Roseland were long velvet blankets of sky with twinkling colored stars. The music playing was Madonna's "What It Feels Like For a Girl." And when I turned the corner, stepped onto that ballroom floor, I saw that it wasn't just Madonna's music, it was Madonna. Sound check.

That night, I was hired to go on a world tour with Madonna. Since then, I've done two and a half more. That night, I went from a Queen with many odd jobs to a Queen with a real job -- making headpieces for The Queen. I said, "thank you." I will never forget that moment. I will never forget that ballroom floor, and the velvet sheets of sky and stars all over.

So maybe this is where my optimism comes from. I'm devastated about another ghost of Manhattan, but I also see that these are borrowed places, shape-shifting with the times. Since the beginning of its history, this place I call home has seen the rise and fall of wealth and art many times, its skyline destroyed and reinvented. As an artistic type, this has redefined my hopes for this place. And maybe New York changes not just because it has to, but because it desires to.

Monday, April 7, 2014. Lady Gaga performs the last show at Roseland Ballroom. After that, this place of magic will go back to the hands of the upper crust -- the first incarnation of Roseland was a "whites-only" classic dancing establishment for the elite. A borrowed place.

I'm now one of those New Yorkers who will try and tell the tale of the jewel-like specter of a city I encountered long ago. I will do my best to describe those legendary spaces that are no longer here. Maybe sometimes what makes a legend is its disappearance. As long as there are storytellers, there will be Studio 54.

My hope is that there will be new places, there will be legends, and there will be more. New York and New Yorkers will continue to make it happen. Enter Roseland Ballroom into my memory of ruined paradises, filed under the word "Legendary." 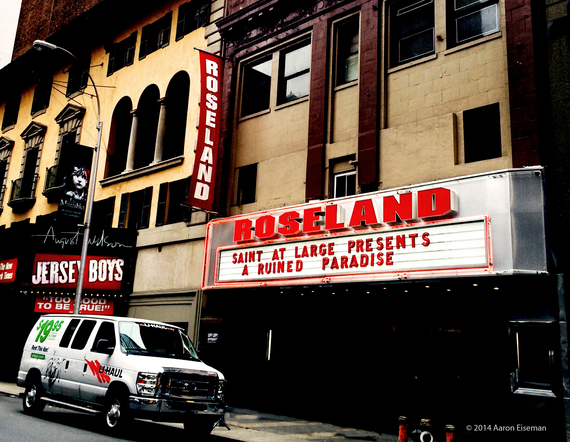