The Social Good Summit held in Manhattan during the UN Week (Sept. 22-24) was organized last fall under the motto where big ideas meet new media to create innovative solutions. This summit united a dynamic community of global leaders and experts to unlock the potential of new media and technology to make the world a better place, and then to translate that potential into action. However, mostly focused on developing contexts such as in Africa, South America and Asia, this summit is a very good example of how very little has been discussed on how information and communication technologies can provide opportunity to middle and lower-income citizens in developed countries and cities, such as New York City and its five boroughs.

New data released by the Census Bureau shows that even as the recession has ended, the city's poverty rate continues to increase, and the gap between the rich and poor continues to increase. Figure 1 shows what some basic development indicators for the five boroughs looked like in 2000, and Figure 2 illustrates, using the median household income, how the development gap in the outskirts of the five boroughs has been deepening. 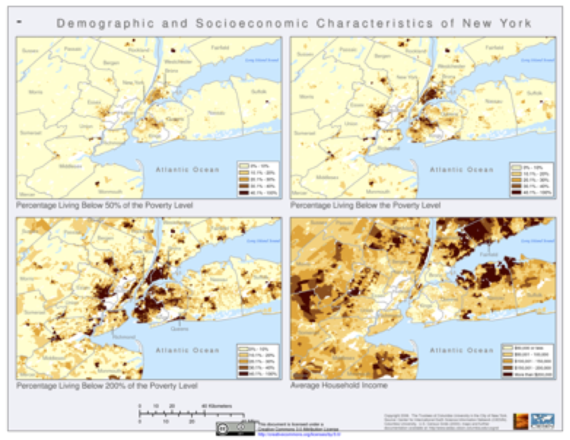 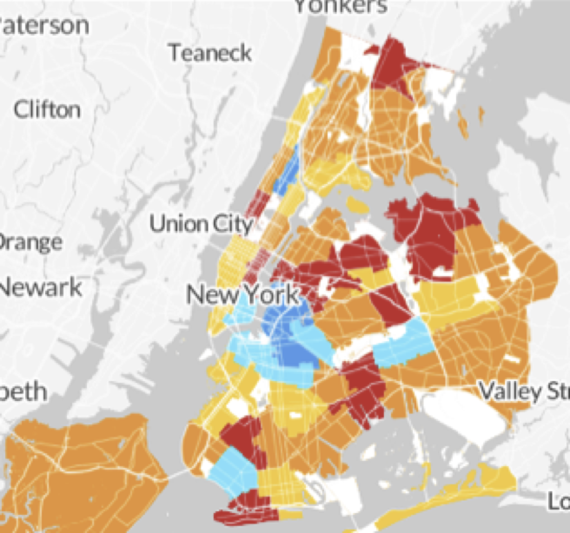 The Eight-Facets Opportunity: building an ICT4(NYC)Dev Platform
Sustainable socio-economic development in the NYC boroughs is a multidimensional opportunity that depends on a variety of complex factors, such as demography, education levels, employment, business development and civic participation. Fortunately, in the past few years, NYC developed a set of characteristics that could make it a unique place for generating innovative ways to fight poverty and inequality using new media and high technology. There are at least eight "pieces of the puzzle" that shape this opportunity. We believe that they can be deployed in a new, innovative ways.

First, Mayor De Blasio's "Framework for a Sustainable City," which provides a vision focused on the energy and environment that can be expanded to include the broader use of information and communication technologies for economic growth and opportunity.

Third, the innovative talent and the knowledge base that has been created by the very large network of business incubators that have sprouted across the city.

Fourth, the educational and research institutions who have made significant inroads in the area of digital technology in the economic development context, such as the Columbia University' Earth Institute and its School of International and Public Affairs; New York University's Wagner School, NYU's Polytechnic School of Engineering, and its new Center for Urban Science and Progress; and the new joint-venture of Cornell University and the Technion of Israel and its new campus on Roosevelt Island.

Fifth, the expertise of the growing international community that is working in digital media, technology and economic development, such as the UNICEF Innovation and the International Center for Journalists.

Sixth, the principles of gamification (i.e., the use of game thinking and game mechanics in non-game contexts to engage users in real problem solving) that are being introduced to policy makers and citizens at ever increasing rates. NYU's multi-disciplinary Magnet Center in Brooklyn is one example.

Seventh, a new business ethics that emphasizes that "business as usual is no longer an option for business" and is more open to "benefit corporations" and public-private partnerships.

Eighth, a growing ecosystem of non-governmental organizations and government units that are applying information and communication technologies to local systems and generating the confidence that economic development can arise with the innovative use of such technologies in urban areas.

Let's not be spectators: data, leadership, coordination and trust building
Problem-solving action requires innovation, leadership and collaboration. As illustrated by complaints from East Side residents regarding the cleaning of the streets in the aftermath of a recent snowstorm, or the lack of collaboration between city agencies because so many operate on their own IT systems, collaboration between governmental agencies is, still, in the era of the information revolution, a major challenge.

None of the above is sufficient if key actors and agencies do not design new solutions, engage in mutual trust building and focus more on sustainable results than on political rhetoric. Take the example of the disconnect between K-12 outcomes and college entrance requirements. There is nothing like having good conversations around "good" data, either big or small, to foster trust and to invent new approaches that address the issues of poverty and inequity in, as Mayor Dinkins once put it, the gorgeous mosaic NYC is.

Jerry MacArthur Hultin is a Senior Presidential Fellow at the New York University and President Emeritus of the Polytechnic Institute of New York University where he lead the Institute's introduction of invention, innovation and entrepreneurship in engineering education. In the Clinton Administration, serving as Under Secretary of the Navy, he was a leader of the innovative use of information technology in the defense department.