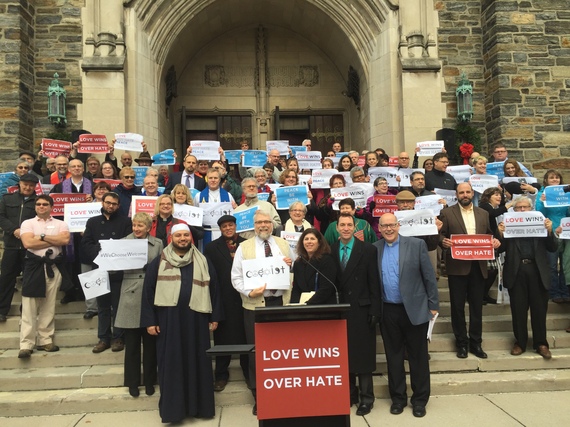 Jesus (as usual) asks us a good question. Fear is on the rise in the U.S. Politicians who stoke fear like Donald Trump benefit in their poll numbers.

Fear works because it leads us into temptation, the temptation to hate and despise the religious other, the immigrant other, the racial other, the sexual other. Fear is very tempting to politicians who want to acquire power because it makes people irrational, hateful, and easy to manipulate.

Yet, "Fear not!" is the one of the most repeated commands in the Bible, and rightly so because fear is the work of the "enemy" (Luke 10:19), that is, the Devil.

We can counter fear and its products of hate as Columbus, Ohio Interfaith Religious Leaders did on Friday, gathering to show that, as Rev. Tim Ahrens said, "Love will win over hate every time," Ahrens said. "So our message as Christians, Jewish and Muslim leaders today was our communities of faith are coming together with love to prevail over hate."

We will have to step it up, however, as fear-mongering is dramatically on the rise.

We need to take an in-depth look at the temptation to get absolute power over others (see Luke 4:6, the temptation of Jesus) as cast in the symbol of the Devil. That's who the Devil is, you know. Not some guy in a red suit with horns and a pitchfork but the very real temptation to use hatred and fear to acquire power.

There's some good news when we do this. The very character of the Devil as shown both biblically and theologically gives clues on how to counter the spirit of fear, provide an antidote to hate, and in effect, defeat the Devil in Politics.

Truth Versus "The "Father of Lies"

Lying is the "native language" of the Devil, and thus the Devil is called "a liar and the father of lies." (John 8:44)

All Politicians Lie. Some Lie More than Others wrote Angie Drobnic Holan for the New York Times on Dec. 11, 2015. Donald Trump and Ben Carson are shown to have a "remarkably poor" score on truth and accuracy, as 70 percent of Trump's statements are "Mostly False, False or "Pants on Fire." Carson is likely worse.

One might say lying has become their "native language."

Now it might seem that just using statistics to show the percent of falsehoods coming from any politician's mouth would be the way to counter fear-generating lies and irrational hatreds.

No. That is the liberal dream of rationality in politics and it just doesn't work.

Instead, we have to build compassionate connection and provide a bridge from falsehood to truth that people may actually willing to cross. That is why emotionally resonant letters by faith leaders work better than statistics.

When people are afraid they are not going to just think their way out of fear.

Take the fear seriously. The counter message has to be a call to renewed faithfulness and include an invitation to join community.

Visuals are emotionally powerful as well, such as the Columbus, Ohio picture of people standing together across faith lines, countering the lies with their bodies. Another is Walk a Mile in Her Hijab a high school project hosted last week designed to allow non-Muslim female students the opportunity to wear the Muslim head covering and gain a better understanding of the Muslim faith. "This event is to hopefully denounce negative stereotypes," said one of the student organizers.

These kinds of actions show without words the profound wrong of the lies.

Show Up Versus Screw Up

There is more good news. The Devil is a screw up, overreaching and trying to grasp more and more power until that very overreaching defeats itself.

Early Christian theologians knew first hand about the effects of the lying, power-grabbing, tyrannical power of the Roman Empire. They made the connection between Rome and the Devil (see The Book of Revelation in the Bible as an example of this).

Irenaeus, a second century theologian, understood that the Devil "tyrannized over us unjustly." The way God, through Jesus, defeats the tyranny of the Devil is to use the Devil's own weakness. The weakness of the Devil is the fact that those who crave absolute power will always want to get even more power and so they overreach.

What God does, according to Irenaeus, is trick the Devil, luring the Devil to go after the one human being who has not sinned. When God becomes human, God "baffled His adversary," the Devil, and "exhausted the force" of his attack. The Devil's own moral bankruptcy is exposed, and human beings can see the devilish abuse of power for what it really is and thus they can escape being enslaved to it.

Trump's proposed total ban on Muslims entering the country is a clear example of overreaching.

Anti-Muslim sentiment has been a staple in American politics, but the Trump remarks have pushed 6 in 10 Americans to oppose going that far.

This is a shift, but at what a cost?

According to Irenaeus, the weakness of the Devil in going after the innocent exposes how corrupt that really is. That does not mean, however, that while that is happening the innocent do not suffer. They do, and often horribly.

But we can help devilish overreaching sink itself more rapidly by constantly showing up to expose it in every venue we can and in every way we can.

We can stand with the innocent, not just with words but also with deeds, and counter the worst of the hate with love.

Our Strength Versus The Temptation Within

The Devil is often seen in popular culture as the embodiment of evil and engaged in a titanic, cosmic struggle with goodness and light. That's not exactly the whole biblical picture of the Devil.

At the deepest level, the figure of the Devil and the seemingly cosmic struggle with evil he represents is always actually an incredibly intimate struggle. It is not the struggle with the enemy far off, but with the friend, the neighbor and ultimately with oneself. The Devil is not pure evil, he is the symbol of the temptation within, the human struggle to be good in a broken and conflicted world. Finally the only way to really understand the Devil is to understand the very human temptation to abuse the power we have over one another.

One way we can free ourselves from devilish temptation in politics is not to demonize the other with whom we disagree, even when we disagree profoundly. We cannot use the same tactics to defeat those who fear-monger as they employ, even when we believe what they are doing is a profound moral wrong.

We say in the peace movement, "When you mirror your enemy you become your enemy." And that is the very thing the metaphorical Devil wants you to do.

Politicians like to portray themselves as "strong," and those who are not willing to go to extremes to demonize others and even use violence, as "weak."