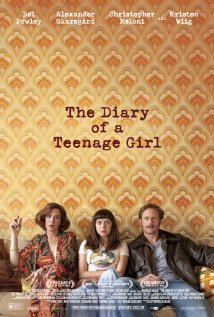 The most important factoid about Marielle Heller's The Diary of a Teenage Girl is that it is based on Phoebe Gloeckner's graphic novel of the same name. In fact, the provenance of the movie, the existence of an artistic work that is created out of great pain and confusion provides the key to both the narrative and transcendence of its denouement. Michel Houellebecq the controversial author of The Elementary Particles would be the ideal reviewer for both the book and the movie since a theme he has prosecuted is a Zolaesque determinism that flies in the face of the freedoms of the "tune in and drop out era" (San Francisco in the 70's--the Patty Hearst case is part of backdrop) that the movie encompasses. Houellebecq's point is simple: there's no such thing as freedom in a world where all actions have consequences--at the very least of a psychic nature. However though The Diary of a Teenaged Girl deals with Minnie (Beth Powley), a 15-year-old who embarks on a torrid affair with her mother Charlotte's (Kristen Wiig) lover Monroe (Alexander Skarsgard), it's remarkably free of judgmentalism, which is refreshing and brave, since the movie breaks all the rules, in an age where sex is increasingly becoming the territory of political pundits. The Diary of a Teenage Girl takes place five years after Louis Malle's Murmur of the Heart (1971), a film which also broke taboos by dealing with incest. Rather than being evil Charlotte and Monroe are trapped in their search for pleasure, but no more trapped than Pascal (Christopher Meloni), Charlotte's former husband, a east coast academic whose hectoring, self-congratulatory moralism seems even more at odds with reality than the movie's day-trippers. Minnie asks at one point, "Does everyone think about fucking as much as I do?" Later she says "I hate men, but I fuck them hard because I hate them so much." Minnie has a hot friend, Kimmie (Madeleine Waters) and together they turn tricks in a bar as a lark. But all along, as the notion of liberation leaves it's path of destruction, the real story, the novel, unfolds, with the altar ego of Aline Kominsky-Crumb appearing as an animated muse on the screen. Many movies are based on novels but the real story of The Diary of a Teenage Girl is the backstory of the sensibility that informs one writer/artist's imagination.