In business, it's so easy to get wrapped up in doing something constantly that often, you don't realise just how far you've come. Or how quickly time has flown by.

An event held earlier this year, the Women in Leadership/Women in Business showcase hosted by ICMI Speakers and Entertainers (ICMI), forced me to look back at just how far I'd come during the 12-month period of running my own professional writing business. 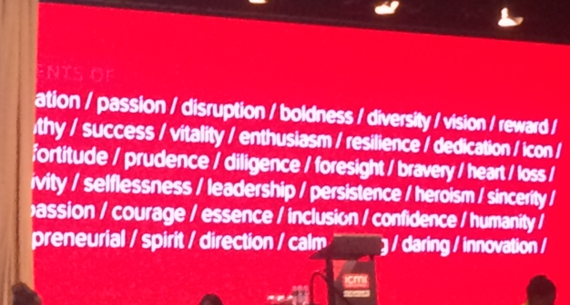 As I sat in the packed out Palladium at Crown Casino in Melbourne, the chitter-chatter of women and the odd male here and there, was drowned out by the realisation that at the same time in 2015, my life was completely different. Back then, I was desperately unhappy in my full-time role and was seeking that little bit of inspiration that would help me to summon the guts to bite the bullet and allow myself to chase my dream.

Luckily for me, I found that inspiration thanks to the incredible Carolyn Creswell whose passion and energy was exactly what I was lacking because I'd allowed my own fear to trap me within the comfort zone of a 9am to 5pm job and a monthly paycheck.

I'm happy to say that in 2016, I attended the annual showcase a totally different person. I'd slogged through a hard few months and lessons that come with starting a business and am now running a successful professional writing business complete with a couple of side projects I'm incredibly proud of. For the first time in my life, I feel as though I'm standing taller and no longer hiding among the shadows because they make for safe territory.

I never lie or mislead people in terms of the realities of business. I've had moments where I've sat in my office for hours out of bitter disappointment, thinking through something that didn't go to plan. There are times where I've felt like giving up because getting a normal job would be far easier than battling up what at times, seems an insurmountable hill. There have been plenty of people lessons and reminders from the universe when I've gone off-course (one as recent as last week - I think of this as the universe's way to remind me that as soon as I stray, it'll be there to hold me accountable). 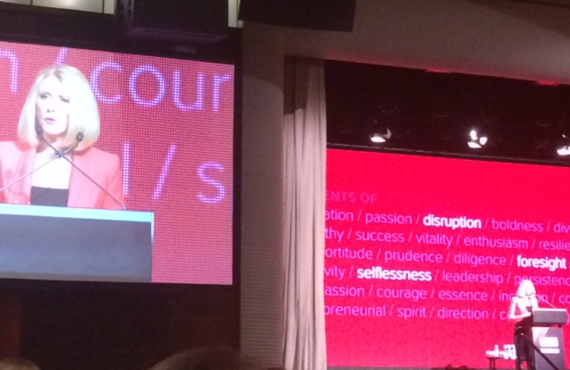 One of the highlights about this year's ICMI event was that a journalist who I'd grown up watching reading Channel 10's evening news, Tracey Spicer, hosted the event. Much to my surprise, the story I'd shared from last year and written about even scored a mention in Spicer's opening speech. Now if you'd told me that would happen a year ago when I was plagued with self-doubt and too scared to disappoint everyone else around me by changing direction, I would have thought you were pulling my leg. And yet, there I sat as my name was mentioned before opening the program booklet, only to find my name staring back at me.

This year's line-up of speakers was once again filled with one inspirational woman after another. It's incredible what a massive difference mindset and a challenging nine or so months can make in terms of attending one of these events. In 2015, I remember how the speakers rescued me from my state of limbo whereas this year, I found myself nodding along and agreeing with many of the observations at play. Here's a brief summary of what each woman spoke about in their speech.

I'm lucky enough to have heard the Thankyou story before when I had the opportunity to meet Justine's husband, Daniel, and hear him talk at another event last year. Justine's take on the Thankyou story was just as interesting and if anything, even more relatable given she's a woman who has no doubt experienced similar challenges in her time. As Justine said, "leaders are learners" and trailblazers don't have Google Maps to show them the way. One thing Justine mentioned that really sat well with me were her thoughts on women and how all of us are so guilty when it comes to comparing ourselves to others. As was cleverly pointed out, most of us feel as though we're winging it and at the end of the day, "we rise by lifting others."

What I love about Maggie Beer is how she's so honest about how it took her from the age of 14 to 34 to figure out what she really wanted to do in life. Her positive outlook in terms of the challenges and struggles she'd endured was so refreshing, as was her desire to find better ways of doing familiar things. Something that really impresses me about women such as Beer is that they've achieved everything they need to in life and yet they're so driven and keen to help others. Beer's latest venture has seen her trying to help with supplying aged care facilities with better quality and tasting food for residents. I was gobsmacked to learn that some homes have a budget of just $5 per day to cover three meals for elderly residents. Anyone who runs a household (and even those who don't) would realise just how ridiculous this is but as Beer said, there's nothing more powerful than seeing change in motion and she's definitely one woman on a mission.

I'll admit, until I heard Clay-Smith, I'd never heard of the term 'portfolio career' (working across multiple part-time jobs as opposed to one full-time job). I now had a definition for what I do with myself. It's hard to go past this quote:

"The greatest longing of the human heart is to be accepted and the greatest fear is rejection."

Who wants to be rejected? No one but fact is, we all have been at some point. Clay-Smith is passionate about those with a disability not getting the same opportunities as others and the work she does in this space is truly remarkable. As she says, "opportunities are precious" and at the end of the day, the path to success involves people. No one reaches the highest of heights by doing it all alone: "we are the product of other people's inclusion and support."

In my books, there is nothing better than hearing from a person who says it how it is. No fluff on offer. Janine Allis is definitely that kind of woman. Her spin on the Boost Juice story was one filled with drama, humour and honesty. She admitted to having a few pity parties in her time and spoke about how often, we look for solutions everywhere but where we should be looking: within. I couldn't agree more with Allis' contention that if you're not scared by your goals, ultimately, they're probably not big enough and it's all about having the guts to find a way to manage those fears, contemplating your worst case scenario and doing great work by working in a job you truly love.

Finally, there is a team of people behind this great event who are responsible for putting together an afternoon that has the capacity to change lives (at least in my case, it certainly did). Anyone who's ever worked in marketing or events or a related sector knows how much planning and time goes into coordinating such a fantastic event. To Viki Markoff, the National Operations Manager at ICMI and her incredible team, a massive thank-you for hosting an event that inspires and most importantly, brings people and especially women, together. I can't wait until next year's event!

Sarah Cannata is a professional writer and the founding editor of This Woman Can.