"Poetry must be as new as foam, and as old as the rock"
-Emerson

Dichotomies are often false but useful. Contemplating the similarities and differences between British and American poetry, having steeped myself in both for some time now, I have been slicing my experiences as a reader along two axes: innovation and craft.

Ancestors to the word "craft" come from Germanic languages and originally had to do with "strength, force, power, virtue," making the transition to mean skill in art or occupation exclusively in English. To "innovate" comes from Latin and French and has always meant, as Ezra Pound would assert, "Make it new!"

To better define the effects of innovation and craft on readers of poetry, here are some comparisons:

To create a recognisable visual example, we might depict innovation and craft in the visual arts this way: 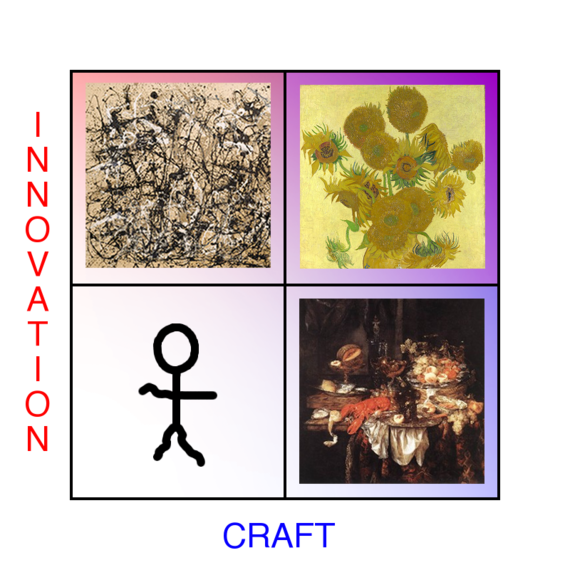 At bottom left, we have low levels of either innovation or craft: the child's stick person. It is both mimetic and crude. We copy at an early age in part because everything is new. Emerson again said, "Every word was once a poem." Marvin Bell quipped, "The dictionary is beautiful; for some poets, it's enough." And until our skill is equal to the task of an original idea, duplication at least lends recognisability to the work: it looks like a person; it looks like a poem.

In the bottom right, we have high degrees of craft, but low innovation. Here are the paintings of Dutch masters, which fill not only exhibitions but museums warehouses with strikingly similar pictures. In craft, the subject is subordinate to its execution. We marvel at pure technique.

In the top left, we have high degrees of innovation, but low craft. Here is one of Jackson Pollock's famous paint-splat pictures, which often provokes the protest, "I could have done that" -- to which the usual riposte is, "Yes, but you didn't!" Though innovative artists often train extensively on technique, it is newness they are after in the end. We marvel at invention.

Finally, in the top right, we have high degrees of both innovation and craft. To me, the work of Van Gough makes this evident. I can detect both the difference from his contemporaries and the display of skill in his work. For all his paintings did to usher in new approaches, there is still nothing quite like a Van Gough. It is instantly recognisable as his.

Having defined terms in this way, let me next emphasise that poetry is a wide-ranging field, with displays of both innovation and craft that cover the map. Yet when I contemplate the fundamental natures of British and American poetry, there does seem to be a slight difference in the "centre of gravity" for each. Visualised, it might look like this: 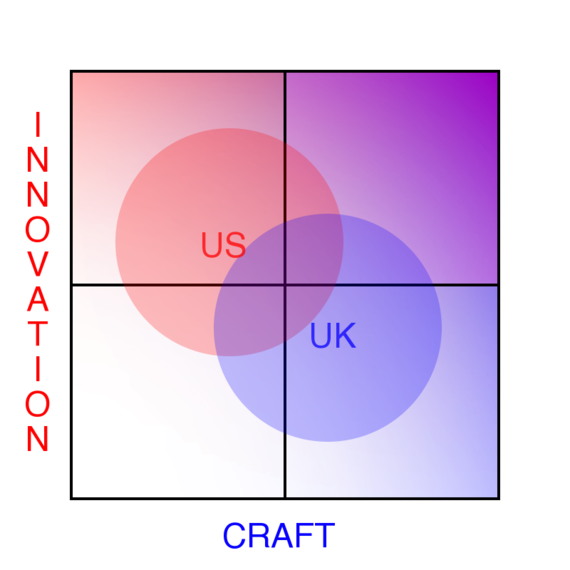 Again, the actual plots for British and American poems (if such a thing could be done) would look more like a Jackson Pollock, spattering the map. Yet if you consider each circle to be something like one standard deviation from the norm (again, if there were such a measurement to be had), I hypothesise that this might be what the two different poetic sensibilities would look on this graph.

Actually measuring this would probably extend into techniques such as measuring the electrical activity of different parts of the brain when test subjects read one or the other types of poetry. Short of a research grant and a few tame neuroscientists, I will have to leave it at as an untested hypothesis for now.

That said, what do you think? Is this model too simplistic, or does it match some of your experience of poetry on either side of "The Pond"? I welcome your thoughts and comments.

This article first appeared on www.robertpeake.com.