After rolling out of bed a disheveled mess I got ready to begin my daily medical rituals; I started my tube feeds, took a fist full of medication, did a few breathing treatments, rubbed myself down in BioFreeze, and then turned on my laptop. It was going to be a good day! I mean how could it not? The first things I see when my computer whirs to life is my face on the front of one of favorite websites. Next to me my little oxygen concentrator started beeping, alerting me that I had waited to long to take a breathe. (How embarrassing. I had literally forgot to breath out of excitement.) I took a nice deep breath through my cannulas, and got ready to read my article! The title read: Why I Still Want to Looking Beautiful, Even Though I'm Dying.

Dying?! What did they mean dying?! I know I am severely ill, fatally ill in fact, but "dying"? I mean, if we are being honest aren't we all technically dying? It's just common courtesy not to announce it right? From the second we are born our timer has begun towards our imminent deaths. Death is the one thing humans have yet to find a means of escape from. It awaits each of us at an unknown place and time. I do not classify myself as "dying" anymore than you would classify yourself as "dying." Now don't get me wrong, my death is in the carpool lane, while your death is stuck in rush hour traffic, but still, I wouldn't call myself dying. Yes, I have a terminal illness (Progressive Systemic Sclerosis) that will take my life long before I want to leave this earth. One that leaves me strapped to constant hospital stays, appointments, procedures, and treatments. One that leaves me in pain more often than not. One that forces me to tote an oxygen tank, a feeding tube, and a central line for survival. While yes, I reside in a body that is slowly failing, leaving my with a reduced time to live -- dying is still not the word I would use to describe myself.

The reasoning behind my thoughts? (I mean, I am sure you are wondering what I consider dying if this isn't it!) The truth is, I have faced death before; it was December of 2014. I was in every sense of the term dying, lying paralyzed from head to toe in a hospital bed while a nurse suctioned my spit so I didn't drown in it. There was little hope for a recovery after a sudden onset of an illness called Guillain Barre. Doctors were a constant ebb and flow out of my room on the Neurology Critical Care floor during a month long admission that nearly took my life. Family and friends had driven across the state to say their goodbyes which I have little, to no memory of. The bright lights of the OR, blood, pain, tubes, and a hopelessness mixed with shear terror as I faded in and out of consciousness are my only memories spanning over that hell of a 24 days.

There are plenty of mental scars (and a few physical ones too) from that month of "dying" that I encountered. Dying changes you as a person, changes your perception, and leaves a deep wound that can never be healed. I attended therapy for severe mental trauma to overcome the reality that I had in fact almost lost my life. It had placed me in a dark bottomless pit that I still now tremble to recall. The memories of Acute Rehabilitation where I relearning how to sit up, walk on my own, use my hands, and get dressed by myself at 23 years old haunts me still. The memories of medical procedures gone wrong (as in: botched spinal taps), and treatments that only hindered (as in: gave me Meningitis) instead of helped filled my dreams for months. Yes, I had in every way, shape, and form been "dying" last December. I remember what dying felt like. I remember the feeling of emptiness it brought to the center of my chest, the way it filled everything with blackness. The fear. I had never before in my life felt like I had lost a battle, but I knew that I had lost this one. There was no fight left in me, my body was too weak to continue, and my mind followed. While I lay paralyzed in that hospital bed, it was as if my ability to fight, to even think about continuing had been paralyzed as well. You can tell when it's the end, as your mind starts to slip, you can feel it closing in... and I was thoroughly surrounded. Somehow, someway I recovered. My body pulled through, and so did my mind... mostly. A piece of me was definitely lost during that admission, something I cannot quite put a finger on. Being that close to death, to actually be dying is unlike anything I have ever experienced, so dying is not an adjective I take lightly.

Currently I am "living," and while my version of living has some extensive differences than the average individual, I still consider myself to be very much alive. I partake in shenanigans with my best friend (Hi Makanda!) every Friday night. I head to the craft store on Saturdays and buy $30 worth of art supplies to make something I probably could have bought off Etsy for $7, and I go out on date nights to awkwardly watch my husband eat a cheeseburger since I cannot. (Which I find oddly satisfying!) If I was truly dying none of these things would be possible, living wouldn't be possible. I know this from experience. I no longer feel the pull of death like I did during December, no longer feel surrounded, and crushed my imminent demise. So no, I am not currently dying, because I know what dying actually feels like -- and this is definitely not it. I can still do things that bring me joy, still take part in activities that bring me happiness; when I was dying in December there was nothing but darkness and fear. I had completely lost my ability to do anything but lay hopelessly and wait for death. 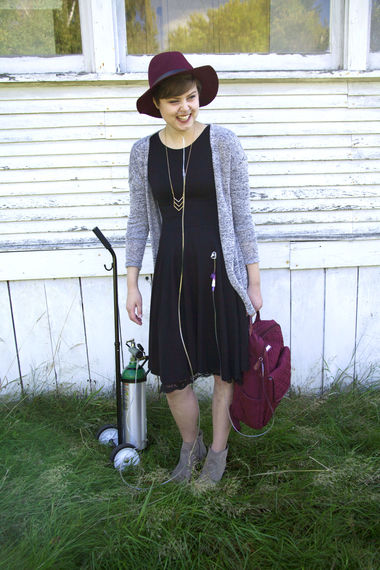 I feel fortunate to live while my body slowly deteriorates, to not be bound to death like I was in December even though I am riddled with failing organs, and a fatal prognosis. Someday again I will be dying, lying in a hospital bed with only days left ahead of me -- and truthfully yes, if you want to define "dying" as losing a battle to illness then I am in every sense of the term dying... but personally I like to call residing in this defective body, riddled by disease: successfully, and enthusiastically living.