Katherine Hackett has done everything America has asked of her. She is a hardworking, skilled, educated professional who paid taxes and contributed to her community. A single mother from Moodus, Conn., she raised two sons who have served our country in the military, one in special forces and the other as a physician.

She worked for 17 years in the health care industry. But 13 months ago, without warning, she got some devastating news that turned her life upside down. She was handed a pink slip and given four weeks' severance pay.

Unemployment benefits have been essential to Katherine's survival during this difficult period. Still, they only covered her mortgage and COBRA, leaving her with only $230 a month for the rest of her expenses. That's less than $8 a day for food, utilities and other necessities. Fortunately, enrollment in the Health Insurance Marketplace thanks to the Affordable Care Act cut her health care costs dramatically.

But now, because Congress didn't pass an extension before the end of the year, Katherine and 1.3 million people like her have had their emergency unemployment benefits cut off. Katherine wrote a letter to President Obama, explaining her struggle. She came to Washington this week, and I had a chance to meet with her yesterday before she introduced the president at a White House event this morning. 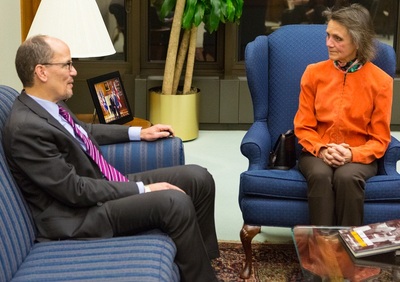 Katherine wanted the president to tell people that she isn't coasting, sitting around the house and enjoying the good life. The mere suggestion is offensive. She is working every day to try to find a new job, sending out resume after resume, applying for every position for which she might be qualified.

In the meantime, she's lost 15 pounds because she's buying less food. She can't replace her old car. To save on heating costs, she's keeping her thermostat at 58 degrees and wearing a coat and hat in the house. What moved me most was when she said she had a "poverty of spirit" and wants nothing more than the dignity and self-respect of going back to work.

There was some promising news today. The Senate threw a lifeline to Americans like Katherine by agreeing to move forward on legislation to extend emergency unemployment benefits for three months. It's just a first step, but hopefully Congress can work in a bipartisan spirit -- as it has many times in the past -- to provide relief to workers who have found themselves out of work for a long period of time through no fault of their own. The president has called this the nation's first order of business in 2014.

If we don't extend emergency unemployment benefits, we're not holding up our end of the bargain with hardworking Americans like Katherine Hackett. Because, as the president said today: "When times get tough, we are not a people who say you are on your own. We are a people who believe that we are all in it together."