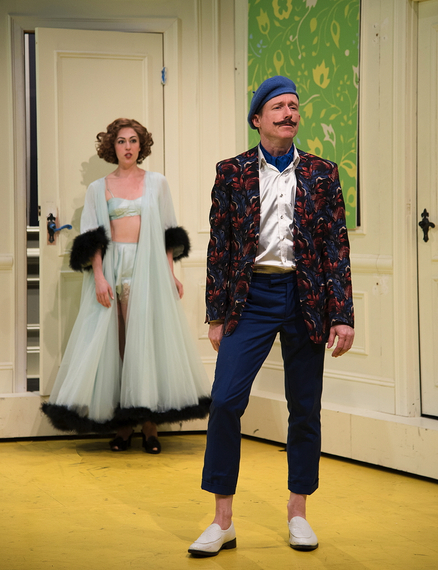 Kelley Curran and Brad Heberlee in The Dingdong, at the Pearl (photo by Russ Rowland)

Farce is all about whose pants you're trying to get into and whom you're trying to keep from knowing it. To the sex-driven and increasingly manic chasing around of the genre, Mark Shanahan, in adapting a play by Georges Feydeau, has added a clever dash of wizardry. Feydeau's Le Dindon (1896) involves the usual deceptions and mistaken identities and unlucky accidents--the woman Pontagnac has been chasing turns out to be the wife of his best friend, while the woman Vatelin had dallied with in Rome has turned up here in Paris--and it takes place among a sizable group of 17 named characters plus miscellaneous others. Shanahan--whose version is called The Dingdong, now running at New York's Pearl Theatre Company--has thrown the whole lot into a pot and stirred in a reducing potion, so that the entire menagerie is performed by a cast of only five. (There are still doors, though--enough doors to hang yourself with, so to speak, if you're one of the characters.) Time and again, we see a player depart and--presto chango!--return moments or mere seconds later as someone else, outfitted in entirely different clothes, hair, and hat. Among other things, The Dingdong is a zippy merry-go-round of interchangeability, suggesting, if you care to think about it, that we're all the same underneath, and at the very least implying that what's going on offstage must be quite a show itself.

It's a nifty little spree, which clocks in at almost exactly two hours, but somehow it struck me as a bit thin, silly but not always funny--as if this French play prepared for American audiences had ended up being British. Maybe I just wasn't in the mood, as one of the play's roguish characters unexpectedly finds has happened to him. After all, the same criticism of thinness was sometimes levied against Noël Coward's sparkling comedies, which are better than that, though it must be said that they're also more witty and characterful than this. Nevertheless, director Hal Brooks has shaped a precision machine of brisk and frisky pursuits with five deft performers, whom I'll simply name: Rachel Botchan, Bradford Cover, Chris Mixon, Brad Heberlee, and Kelley Curran. Heberlee and Curran enact the most colorful variants of the species, but everyone here is a skilled farceur, and they all benefit from Amy Clark's vibrant costumes.

The Dingdong runs at the Pearl through May 15. Information is available here.