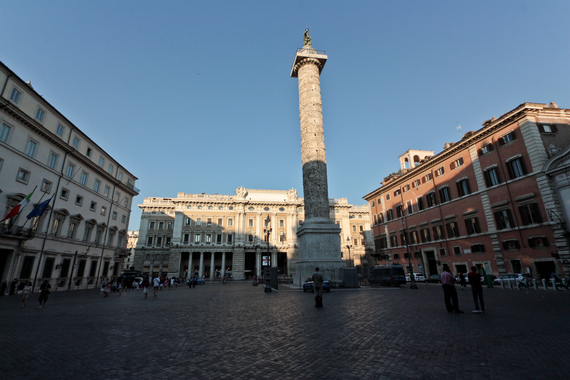 Italy is a marvelous cultural country. I am not biased when I say it -- there are many reasons to believe it.

Today I was in a conference held at Palazzo Ferrajoli, a majestic palace belonging to an Italian noble family in the XIV century. The palace is in the historic heart of Rome, where all the main political institutions are, and just in front of Palazzo Chigi, formerly the Austro-Hungarian empire's embassy, and now residence of the Italian prime minister. Both these palaces are in Piazza Colonna, named after the marble column of Roman emperor Marcus Aurelius, which was stood there since 193 CE. Simply breath-taking.

The conference was about cultural diplomacy and gathered many Italian diplomats who traveled the world and started writing. "Diplomats -- " started Stefano Baldi, head of the Diplomatic Institute of the Italian Ministry of Foreign Affairs, "are observers of realities around them, and when they travel and they start collecting experiences, they get the hang of writing and they become writers-diplomats. They work during the day and they write at nights." Mr. Baldi has been collecting and analyzed over one thousand forty nine (1049) titles by two hundred and seventy nine (279) authors. The topics of the books are very diverse and give a broad picture of the diplomat's world. From spy stories to biographies, from architectural and historic analysis of the countries where the diplomats were working in, from gastronomy as one of the keys of the negotiations around the table ( the fork as the secret arm of Italian diplomacy), to technical and analytic country profiles and their international and diplomatic relations with the European Union and Italy.

The record for book publishing has been set by Sergio Romano, former Italian ambassador to Moscow and columnist for the newspaper il Corriere della Sera. 70 books.

Mr. Baldi, eclectic gentleman who also inspires young diplomats to be resilient, prepared for the diplomatic career ahead of them, optimistic and brave leaders of the future, is himself a very creative man, who also hosts a radio show on Radio Luiss, which mixes music and diplomacy in a perfect orchestra for the soul.

Passion and commitment, engagement and energy to tell stories and share them is a travel in itself. "Every person is a book, so we should be willing to listen on one hand and write our own story to tell on the other"- told Claudio Pacifico, former Ambassador in Cairo, Tripoli, Khartoum and first secretary of the Italian embassy in Washington DC.

Ideas, traditions, digital revolution and leadership are the key words, common for all the diplomats at Palazzo Ferrajoli. To check out more about Italian diplomats around the world, here's the complete list of books.

And, if you want to meet Mr. Baldi, here's a TED video for you

The true richness lies in Knowledge.