American prisons foster a culture of violence, hatred, bigotry and dominance. They take the criminally inclined, and not so inclined, and turn them into hardened convicts who, after a period of years, become dangerous men. These dangerous, hardened convicts are then turned loose onto our city streets to do what they will; mostly commit crimes and return to prison. This is the sad state of American corrections, the land where I currently live.

In an effort to show the type of culture prevalent in American prisons, I present my own personal experience with fighting over dirt on a recreation yard at a prison where I once served time. While I now see that the whole situation was stupid and idiotic, at the time, I was ready to go to blows about who kept on stealing the dirt that I used when working out (via the use of dirt weighted bags). This is my story, which illustrates the problem with the current convict culture.

Several years ago I was at a prison where we dug into the ground on the recreation yard with plastic cups to create dirt piles that we would use when working out. The dirt would go into homemade weight bags (often made in sandbag fashion by sewing the bottom of a severed prison-issued pant leg), which we would then lift like regular dumbbells. The problem was that someone was stealing the dirt from my pile -- dirt that I felt that I had a proprietary claim to since I had created the pile in the first place. I was angry, and ready to fight.

"You don't understand. They keep on sneaking around and stealing my dirt when I'm not on the yard. I use the dirt. I dug the hole. And I'll be damned if I allow someone else to steal it," I growled at my cellmate.

"But it's only dirt. Let this shit go," exclaimed my cellie. "It's not worth a beef."

"Is this really worth getting in a wreck over?" reasoned my cellie, gently.

"Yes!" I exclaimed. "It's a matter of principle. When they steal my dirt they disrespect me, and I'm not going to stand for that!"

"Now we're on to respect," he exclaimed in exasperation. "Who gives a damn what they think? They're idiots who don't know better. Drop it. It's only dirt."

"While I don't give a shit about those fucking haters, I'm not going to let them punk me out! I'd rather put it to them than allow them to treat me like a bitch."

"Then go get a piece of steel and put in some work! Show them who's boss. I'll strap-up too. Might as well since I'll be fighting too, once they take a swing at you anyways."

At the time I felt that I had a certain element of convict morality on my side. They probably felt the same way. After all, in prison, it's understood that what you can take becomes rightfully yours. And if you can't protect something, then you have no right to it. That's just the way it is in prison, at least as far as the convict culture goes.

In hindsight, I see that this was an idiotic thing to be angry about; certainly not worth someone being stabbed or dying over, but it felt right at the moment. At that moment I was ready to put it all on the line to ensure that I, and my dirt, for that matter, was given the requisite amount of "respect." And I'm one of the more rational ones.

This is the disease that permeates American corrections. Prison administrators worry that by selling sugary soft drinks that inmates will make prison wine (called "hooch") -- which they will do regardless of whether or not there are sugary sodas -- while the inmates fight over dirt, who sits where in the chow hall (a matter that people die over every year) and who sits where in the TV Room (another matter that inmates die over). I suppose that the prison administrators would rather that the convicts kill one another than learn their rights and ensure that the rules are adhered. 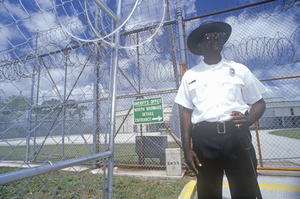 The field of corrections in America has gone awry. Instead of focusing on rehabilitating prisoners and finding ways to make them employable upon their release from custody, prison administrators look for ways to subjugate those in their charge. They search for ways to repress individuality, and rule by coercive force, which only breeds a harder, angrier, more violent prison population. They then foster the thoughts and engage in the activities that you'd expect of a convict, like fighting over who has the right to dirt in a prison recreation yard. Prison officials would rather spend their dollars on stun batons, concussion grenades and yet another solitary confinement cell, than on college courses, drug treatment programs and anger management therapy groups.

Until we -- as united and informed people -- refuse to accept the status quo, problems like the dirt wars will continue. But who really cares about the dirt wars? What we should care about is the travesty of sky-high recidivism rates (most prisoners return within three years of release), which is preventable through education and rehabilitation, but which aren't made available to those in desperate need of them.

As a friend explained to me years ago (I'm loosely paraphrasing):

For every security camera installed, that's a year's worth of books that are not in the education department. For every bullet shot into a prison recreation yard to stop a fight, that's a pen and a pad of paper. And for every additional prison guard hired to deal with the increasing violence that has resulted from abrasive and cruel policies designed to stifle and repress, that's one less psychologist to lead a drug abuse class. They would rather beat us, chain us and lock us in the hole than treat us and fix us.

It raises very good questions. Why not treat wrongdoers so that they no longer break the law? Why insist on beating and abusing inmates mentally and physically and then preparing for their eventual return rather than fixing them in the first place? It seems backwards, but then again, that's the way it is, and, perhaps, the way that it has always been, and so will continue to be.