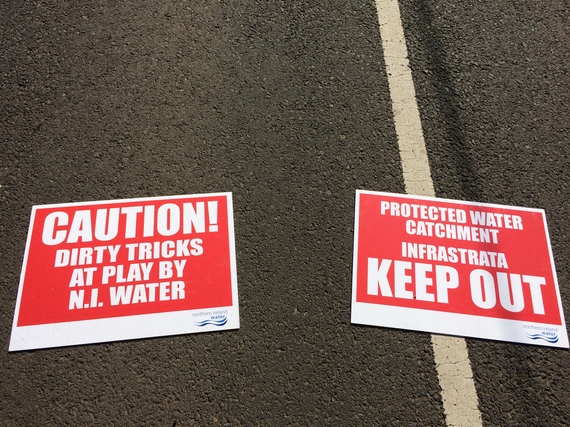 This article first appeared on Rabble.ie

If, post-Brexit, the UK risks being known once again as the "dirty man of Europe" then Northern Ireland would be its soiled undergarments. Ours is a jurisdiction replete with the biggest illegal dump in Europe, unlawful industrial-scale sand dredging in a protected area, and £1 million in grants and police protection for transnational corporations planning to use cyanide to mine for gold.

In Latin America communities resisting the corporate destruction of their lands speak of being up against a logic of "extractivism," a term which Naomi Klein popularised in her book This Changes Everything. In recent years, Northern Ireland has seen terrorism--and to a lesser degree sectarianism--recede in the wake of the Good Friday Agreement. A new -ism has risen in the power-sharing of the peace process. We are witnessing the government-backed roll-out of extractivism: wilful destruction of the commons for private profit.

Northern Ireland may be nominally "post-conflict" but it is still only nearly normal--where else would a current Environment Minister claim, as the DUP's Michelle McIlveen did, that there is no need to develop climate change legislation? This is a logic completely disconnected from the realities of the 21st Century.

In the real world, of course, the 1 degree Celsius global warming which humans have already caused is wreaking havoc on millions of lives worldwide, with more frequent and severe droughts leading to prolonged famines in many countries and fuelling conflicts. A further warming of two degrees Celsius would lead to conditions that are, according to renowned climate scientist Kevin Anderson, "incompatible with an organised global community."

Painfully aware of this planetary emergency, social movements pressured governments to include a goal of keeping global average temperature increases below 1.5 degrees Celsius in the 2015 Paris Agreement. The Agreement became law this November, and almost all countries have submitted plans to reduce their emissions. The world is moving towards de-carbonization.

Though the direction is clear, the speed of travel is too slow. Current pledges under the Paris Agreement, if fulfilled, would still result in warming between 2.7 and 7.3 degrees Celsius by the end of this century. There is no time for dawdling: according to UNEP the next 3 years are make or break for meeting the 1.5 degree goal.

Developed countries such as the UK have accepted that they should be taking the lead in the effort to cut carbon emissions while also supporting developing countries to achieve sustainable development. Although analysis has shown that the rich countries have not been taking on their fair share of the effort, and their mid-term targets are also a long way from being fair, they at least recognise the moral imperative to act.

Following this imperative, the 2008 UK Climate Change Act introduced a legally binding target: reduce overall emissions 35% below 1990 levels by 2020, and 80% by 2050. But this only applies to aggregate UK emissions rate--Northern Ireland is not required to take on its own fair share of the effort within the UK. According the the Committee on Climate Change (a statutory body set up to advise the UK government), "it's implicit that all the countries contribute to the required reductions", although there are no specific targets for any of the home nations.

With only 2.8% of the population, Northern Ireland is responsible for 3.7% of UK emissions. On one hand, the province has the highest prevalence of fuel poverty in the UK and a quarter of its children living in poverty. But on the other hand, the pollution of a few--with their multiple cars and weekly flights to mainland UK--makes it the worst performer in the UK. Between 1990 and 2014, Northern Ireland reduced emissions by 16%. The UK average was 30%. Scotland managed 41%.

In light of this failure to get with the times, the Committee on Climate Change recommends that Northern Ireland adopt its own climate change legislation. Instead, we have the DUP who aggressively seek to impose fracking on an unwilling public--a stance made all the more repugnant given the clear conflicts of interest involved. Instead, we have the DUP who consciously and scandalously wasted £485 million to heat empty buildings under the guise of a "renewable heat initiative." Not only are they unwilling to act on climate change, their latest blunder threatens to actually undermine trust in legitimate green schemes at a moment when Northern Ireland needs to transition swiftly and fairly to a full decarbonised economy.

It would be easy to despair the backwardness of a place where the sole water provider is the biggest polluter of rivers and where a former Environment Minister can publicly deny climate change. But that would be to concede all power to a government that blatantly does not care about the special places under its own jurisdiction, never mind anywhere else. The majority of politicians here may be totally out of touch with reality, but many people are not. Whether it is students organising to pressure their university to stop financially supporting climate criminals, or local communities fighting (and winning) against extractive industries, people power is growing. Power from below like this is the only thing that can change the current reality and shape a better world--and Northern Ireland--for all.