It is now becoming obvious that we are no longer a United States of America. There are many states that restrict voting rights, abortion rights, immigration, even the collective bargaining rights of workers that are no longer able to negotiate for their own living wages.

This is when most media is lamenting the possible breakup of the European Union with Great Britain's Brexit vote to depart from the EU. But the US is breaking up in far more serious ways, even without the influx of millions of Muslim refugees that Europe has to deal with and is causing its drift to xenophobia and the fear of foreigners.

The US in many ways is still fighting the Civil War of 150 years ago, with the defacto apartheid of poor vs. wealthy neighborhoods, and the police killing of blacks at traffic stops. A recent study by the New York based Center For Policing Equity showed that African Americans are more than 3 times as likely to be beaten, bitten by police dogs, pepper sprayed, Tasered, or shot, according to the New York Times.

There are now 26 right-to-work states that either don't allow workers to join unions, or pay dues, or bargain collectively for their wages, even when their workplace may be under a union contract. This has resulted in those states having the greatest income inequality and lowest wage-earners. 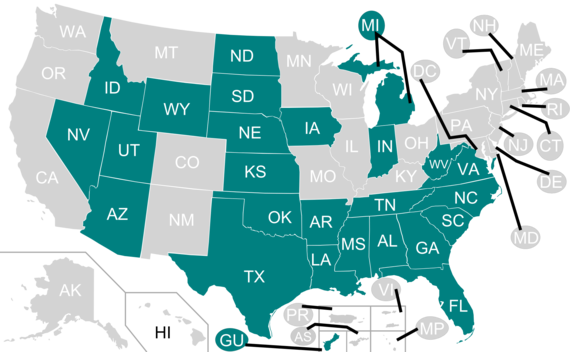 There are a very similar number that restrict abortions--even in the case of rape for women--and restrict voting rights when the Voting Rights Act was gutted by a 5-4 Supreme Court vote in 2015.

And many of those same states don't allow convicted felons that have served their time from voting--as many as 30 percent of voter-age African Americans in southern states, thanks to the War on Drugs, says Michael Moore in his movie, Where To Invade Next. GW Bush probably only won Florida because thousands of ex-felons were stricken from the voting roles--mostly in Democratic-leaning counties.

This is why African-Americans now comprise 50 percent of our 2.3 million prison population when they are 12 percent of our population. It provides the cheap labor that prison factories have used to generate products for most large corporations plus the military--another form of slave labor.

Florida leads the pack in the number of citizens excluded. According to Desmond Meade of the nonprofit Florida Rights Restoration Coalition, "Over 1 million people in Florida right now are disenfranchised. Nearly 1 in 3 of them are African American men." If these people were able to vote, Meade continues, "Florida would no longer be a swing state."

But according to the Brennan Center for Justice, 48 states (exceptions: Maine and Vermont) prohibit current prisoners with felony convictions from voting and 29 of them also bar those on probation or parole. And of the four states that permanently bar voting by former felons--Kentucky, Florida, Iowa, and Virginia--the latter three are battleground states.

Then there are the gun laws. Only 6 states restrict or outright ban the sale of military-style assault weapons, when more than 30,000 gun deaths are recorded every year, and Orlando-style massacres occur because of unlimited magazine sizes for those same assault weapons.

What is behind the defacto civil war still raging? Economists say it's the globalization and export of good jobs to developing countries with cheaper wages that have hurt those blue collar workers in the poorer states. Too many blame immigrants, or nonwhites, or anyone not belonging to their tribe for their predicament. But we also have to look at the monopoly power of corporations that have pushed such free trade treaties, suppressing their employees' wages while paying their executives record incomes.

In fact, these states have in many ways already withdrawn from the United States of America in trumpeting state and local rights over inalienable rights. The result is a modern incarnation of our ongoing Civil War.