As a journalist for thirty years, I am embarrassed to admit this, but I can't name the Secretary of Housing and Urban Development. No, nor the Secretary of Health and Human Services, Interior, Education, Energy, Transportation, Treasury, Labor, or the head of the EPA. Shame on me.

But I draw perverse comfort from knowing few of my fellow journalists, or for that matter, most public-minded citizens, can name them either. I've put them to the test. (Quick, tell me who Hilda Solis is -Answer: Obama's Labor Sec for four years.) Indeed, a few years back, I tried it on a class of Harvard's Nieman Fellows, a distinguished group of mid-career journalists. Most were stumped.

So, what gives? A generation ago, there wasn't a self-respecting reporter who could not reel off the names of most cabinet secretaries. It was easy: They were constantly in the papers, their faces on the nightly news. Over the decades, they were part of a highly visible and influential coterie, going back to the likes of Harold Ickes, Henry Morgenthau, Frances Perkins, Joe Califano, James Schlesinger, William Ruckelshaus, George Schultz, Bruce Babbitt, James Baker. What happened?

The answer, I suspect, is complex but emblematic of a fundamental shift both in government and how we as journalists and citizens relate to it. (And no, I do not believe that today's Secretaries are a lesser breed, though some may argue that point.) Allow me, if you will, to speculate.

The change has been slow coming. Surely 9/11, the day of the terrorists' attack, acted as an accelerant. On that day, and on every day since, the nation has been on something of a war footing, our focus on terrorism. Since then, we have heard more about the Department of Defense, State, CIA, and even the once ghostly NSA, and less and less of the other governmental entities. The bureaucratic front line in the war on terror has usurped our attention at the expense of all the rest. The constellation of agencies and departments have been reduced to bit players on the periphery of American consciousness.

But that is only one reason, I believe, for the disappearing cabinet secretaries. Their actual roles and agendas have also shrunk in the public imagination. A part of the change is the emergence of the so-called "Unitary Executive Theory" or its more critical sobriquet, the "Imperial Presidency," which has concentrated power in the Oval Office and drawn it away from the rest of Washington.

The president, one might suggest, has come to behave more as the commander-in-chief even in domestic matters. Consider the proliferation of Executive Orders and presidential signings- those declarations in which the president signs legislation but then notes which of its provisions he intends to support. The agenda is more centralized and the cabinet and agencies are on a shorter leash, possessing less authority. A "Team of Mascots," was how one 2012 Vanity Fair article referred to them. 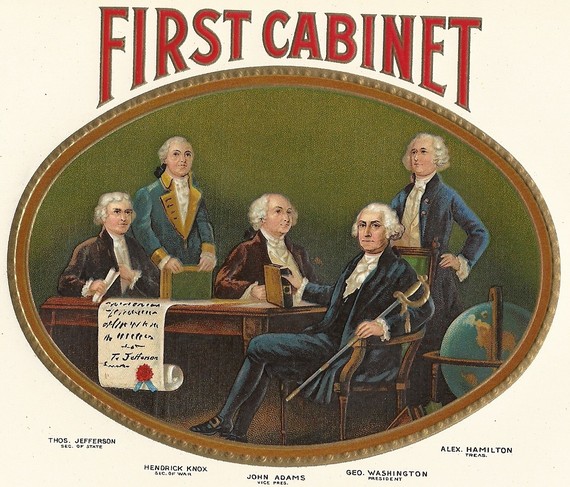 And even when the agencies or departments come into public view, it is nearly always in a negative light - usually because the party in control of the House or Senate is using them as a punching bag, proxies in their partisan attacks on the incumbent administration.

The discussion of the Affordable Care Act - Obama Care - has garnered as much attention as any government initiative in the domestic realm, but rarely is it actually linked to the departments and agencies with which it intersects. Its politicization has kept the focus on the White House. The head of the IRS is in the news, not because of tax reform, but because he faces potential impeachment from a Republican-controlled house.

Something else too accounts for the relative invisibility of the cabinet positions. There are now fewer reporters covering Washington and their portfolios are larger and more diverse. It used to be that individuals were assigned each department or major agency. Now, they are covered as part of a cluster - if at all.

It is a natural and inevitable response not only to shrinking newsroom budgets and staff but also to a changed vision of how best to serve citizens. The more detailed coverage of these entities has passed to specialty and niche organizations, most of which require costly subscriptions and cater to industry, lobbyists and lawyers. Think Bloomberg terminals.

And the Internet's affect on coverage does not stop there. It has ushered in a mindset that focuses on page views driven by SEO's - Search Engine Optimizations - and which closely tracks the most emailed, the most read, the most commented upon. In such an environment the actions and decisions of executive departments and agencies, often wonkish and incremental, can rarely compete for eyeballs.

Gone is the old mindset that it was our responsibility as journalists to cover these entities, part of a universal model, fueled by an obligatory sense of public service. At its best it generated remarkable insights into the character of government. At its worst, it could be myopic and deadly boring.

Now we come to the public itself, whose disdain for government and its processes has never been greater. Its hostility to government and governance make the old coverage unwanted. But an increasing lack of familiarity with the workings of government and those who must implement contentious and complex directives plays squarely into the hands of demagogues. It is part of a canvas that portrays government as faceless and feckless, an enemy that veers between the incompetent and the sinister.

The twin juggernauts of war coverage and a political race that now never concludes but loops seamlessly into the next consume all the available oxygen in the room, leaving little for the quotidian affairs of actual governance. That may help explain not only why we cannot name the cabinet secretaries but also how we got to the current sad state of affairs.

No, naming cabinet secretaries is not just a Washington parlor game, and our inability to identify them is but one more telltale sign that something has gone wrong with our democracy.