We live in a world of opposites, a world of contrasts, disparity, divergence. West vs East, modern vs traditional, liberal vs conservative, good vs bad, us vs them. We live in a world where we find similarities only by finding the difference with something or someone else.

We live in a world where leaders think the best way to solve a problem is to become the problem. To solve bombing by bombing. A world where we feel we can force each other to think a certain way. Slam it out of them. We try to find remedies to a disease, but these remedies aren't helping. They only prolong the disease, or create new diseases. The question is, do we create new enemies by trying to eliminate enemies? Will we really kill terrorism by killing terrorists, bombing cities and invading countries? 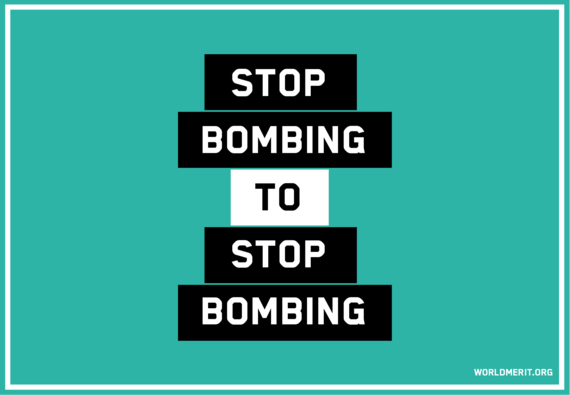 We live in a world where, more than ever before, we feel we understand the importance of ethics, the importance to give back and not just take. A world where buying a coffee at Starbucks means investing in communities in Kenya, where of every dollar you spent, a part of it goes to a charity. We live in a world of cultural capitalism, where charitable giving is integrated in capitalism and our lives. Ethics is a part of who we are, by what we purchase. It's a marketing technique used within our society, which focuses more than ever on feeding our ego's; enlarging the added value by creating a feeling, whether that's excitement, adventure, or by 'added value to society' which gives the buyers the idea they are doing good with a purchase.

But...is this actually helping? Are we not really using one hand to help fix something that we have broken with the other? Aren't we trying to put a plaster over a broken rib?

This 'doing good' in order to do good is something that sooths the soul. Feeds the ego. If we are honest with ourselves, we can see that it gives the feeling we are helping to construct something better. Right?

It is not that we should not do this. The previous situation is not better. But as I said, in my view it's not actually doing anything good. It stems from the idea of differences, of power and of inequality. Lots of charitable things or causes uphold existing power differences, and not many of them truly empower the people they say to be working for. Similarly, at the receiver's end it often creates stronger dependency and strengthens passivity. Fair coffee prices for the farmers and changing the huge import barriers for the third world will probably help a lot more than receiving that tiny tip Starbucks gives back. It's part of the white savior narrative, where the rich men come in and save the poor. "Us", with our good economy, we'll buy the more expensive stuff, so we do something good to give back to those who are still left behind.

It's a narrative many charities suffer from. "We" will tell you what you should do. "We" will tell you how you should develop. "We" will duplicate our history of development on yours and you will become like "us". But...did you ever actually listen to what it is "they" need? Did you ever think that "they" might be more developed in some areas than you? Ever think that they might not want the same situation you are in?

Charities like this, cultural capitalism in the West and in many other parts of the world, focus attention on the wrong things. It focuses on remedies of a disease the world is suffering from, and they are only contributing to it.

That's why I love World Merit so much. World Merit is an international charity with a global community of changemakers, focused on mobilizing youth to achieve the United Nations Sustainable Development Goals. Even though it's a charity, it focuses on reconstruction. It focuses on humanity, on community. It listens to youth, it supports them in the work that they do on the ground. It doesn't interfere; it listens to what people on the ground tell that is needed. It doesn't fix a broken arm with a plaster; it supports the rehabilitation process. It empowers, it gives away control, more than it tries to fix anything itself.