Disengagement is a defining mega-trend in today's world. With all the talk about "disengaged" leaders and followers not to mention the unemployed who are disengaged from work altogether, maybe we just go ahead and name our new normal the Disengagement Economy. Mostly we have given disengagement a pass because after all it is so soft and so hard to get a handle on. Yet, as it piles up across the domains of our lives -- home, work, politics and faith -- our growing disconnect carries major social, emotional and economic costs. Please indulge my relationship math as I quantify what you already know qualitatively: the magnitude and cumulative cost of our relational disengagement is not sustainable.

Disengagement at Work -- Hard Cost We Can No Longer Afford

Gallup reports 70 percent of employees are not engaged in their work including 18 percent that are actively disengaged. Engaged employees give 57 percent more effort and are 87 percent less likely to resign. Thirty-five percent of workers say they would forego a significant pay raise in exchange for having their boss fired -- permanently disengaged. Employee disengagement also drives concern over customer engagement. A Korn/Ferry survey cites customer engagement as the top worry keeping Chief Marketing Officers up at night. Why? Because engaged customers average a 23 percent premium in value (share of wallet, profitability, sales growth) and disengaged customers a 13 percent discount.

The long-term unemployed are now becoming disengaged from the labor market at an alarming rate. Work force participation, the percent of the total workforce at work in our economy is at a 35-year low of 62.8 percent -- separating people from work, co-workers and family roles as providers. Pope Francis characterizes these non-participants as "among the ranks of the excluded." Yet economist David Rosenberg reports those ages 25-54 who have withdrawn from the labor market but don't want a job rose almost 5 percent last year and those who would take a job if offered one fell 3 percent. The Congressional Budget Office estimates the Affordable Care Act will reduce the number of workers engaged in work by the equivalent of 2.5 million jobs. The fear of work disincentives weighs against the hope for broader health care coverage. Disengagement afflicts employers and the unemployed.

The growing income gap that separates the top 1 percent from the 99 represents another form of disengagement -- with people falling out of the middle class. Stock ownership as a metric for participation in capitalism is the lowest since 1999, down 13 percent since 2007. Even membership in public service unions has dropped from 35 percent in the 1950s to 6.6 percent today.

Disengagement in the Broader Culture

Unfortunately we operate in a "disengaged" marketplace much broader and deeper than just work. In our families, our divorce rate doubles over the past five decades and is up for three years running. Divorced men are depressed at six times the rate of those who aren't. For women it is 3.5. Marriage is down 50 percent since 1970. Single-parent families have jumped 700% since the 1970s with their kids experiencing poverty at six times the rate of married families. Loneliness, up 65 percent in the past ten years, carries the same mortality risk of smoking and twice that of obesity.

In politics we lament two parties in Washington so divided that Standard & Poor's cited them in downgrading our country's credit rating and a president seen as disengaged from his signature healthcare initiative. No surprise, as disengagement and dysfunction grow, defections from political parties have doubled in the past 50 years. Similarly, the exit from religious affiliation has doubled in the past 20 years.

The future of engagement doesn't look promising. Student engagement falls from 80 percent in elementary to 40 percent in high school as graduation rates in 17 of our largest 50 schools has dropped to 50 percent. Pew Research has just reported Millennials are rejecting marriage, political parties, religious affiliation, corporate organizations and trust in others at unprecedented levels. Seventy percent see themselves working independently at some point - disengaging altogether from large corporations. Kay Hymowitz reports that over 70 percent of low-income babies will have at least one "half" sibling by the time they are five which research has shown to fracture familial bonds.

And with the number of technology devices overtaking the number of humans on the planet in 2014, we keep finding new alternatives for getting better informed, absent human interaction. New terms like Facebook Depression, Technology Addiction, cyber-bulling and socialbots (social robots) signal continuing relationship challenges.

"Generation Not," - not married, not a parent, not a worker, not a customer, not democrat nor republican, not religiously affiliated - is increasingly defined by the relationships they do "not" have.

An economy seized by disengagement struggles to run, or even walk. The cycle goes something like this: kids from relationally chaotic households perform poorly in school, leading to poor work skills and performance, resulting in uncompetitive workers, leading to the export or elimination of jobs. It culminates in lost tax revenue, increased demand for government services, greater budget deficits, and more political gridlock. 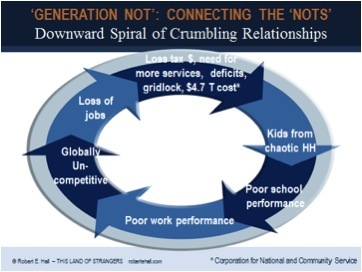 Researchers estimate the cost at $4.7 trillion. If there were an engagement stock exchange, this would classify as a market crash.

Relational engagement is central to productive outcomes in sports, business, government, community and family. It is naïve to hope for a stronger economy on the back of systemic disengagement.

Our Disengagement Economy burdens us with cost we cannot afford. We can no longer give ourselves or our leaders a pass on disengagement. A productive economy and a functioning society will require engagement as a strategic priority. That means we must consider engagement a key skill in selecting and developing our leaders. It also means that CEOs, political leaders, and each of us must do the hard work of investing in relationships because our disengagement yields no economy - only diseconomy.