I like being able to trust the author of the book I'm reading. Fiction or non-fiction, I want the truth -- or at least as close to the truth as the author can get. Which is why I not only enjoyed but appreciated The Disposables by David Putnam. Putnam wrote this fast-moving novel that reads like a movie, after 30 years of being immersed in just about every aspect of law enforcement: narcotics, violent crime, criminal intelligence, hostage rescue, SWAT and Internal Affairs.

The story is told from the point of view of Bruno 'Bad Boy' Johnson, a black cop with the letters BMF -- the insignia of the Los Angeles Sheriff's elite Violent Crimes Team -- tattooed onto his bicep. He's recently been released from prison for committing a crime that many of us would condone. The book starts out with a scene that feels familiar. It could have been Detroit or Camden, but in this case it's South Central LA, late Saturday night in a liquor store on Long Beach Boulevard.

"A kid came in with a brisk blast of Southern California winter, his ball cap skewed on his head, pulled down over the top of his hoodie. He was black with dark skin that made him difficult to recognize under the navy-blue sweatshirt hood. Both hands were in his pockets."

The second paragraph is just one line: "The kid was about to die."

And the kid does die. It's another perfect storm of drugs, adrenaline, fear, cops who have been on the streets too long and have witnessed too much, and what can come from being raised in a world that most white people know nothing about.

As our protagonist points out, this is a kid whose brain has been fried from crystal meth... "a dope fiend... desperate, ready to do anything it took," but he's also "someone's child, someone's grandchild. A mother, an auntie would be waiting up for him tonight and, instead, they'd get a coroner's house call."

I couldn't help wondering as I read, how different the book might have been had Bruno Johnson been a white cop instead of a black cop. Although Putnam doesn't write about racial issues overtly, race is an inescapable part of this book. Having a black protagonist allows Putnam, who is white, to address race head-on, naturally. He has no agenda other than telling the truth as he saw and experienced it and then allowing his imagination to have at it.

We've all heard about trigger-happy cops who are itching for targets upon which to unleash their power, but not a whole lot is said about someone like Bruno Johnson, who walks into a house and finds a six year old "hog-tied" and beaten by his crack-addicted mother's boyfriend until he is almost dead. How does he go home to his own kids? What are his dreams filled with?

Johnson is a complicated man who has found the woman he adores, yet struggles to stay faithful. He has a temper that can flare into violence when provoked, yet has a soft spot for the vulnerable. He's seen small children victimized and brutalized too often and recognizes that the system in place is unable to protect them. So he comes up with an unorthodox plan to save a small group of kids who have become society's disposables.

The Disposables is about corruption and compassion and how the two can co-exist. It explores the wavery lines between what's legal and what's moral. And it shows how basically decent people can lose their moral compass after too many traumatic experiences, too much disillusionment, too little hope.

What Putnam does so well - besides making us want to read his book in one sitting -- is help us understand how complicated and brutal life is on the streets, whether you're a cop or a drug addicted youth or a prostitute. And he makes us realize how easily the truth can be manipulated - by the media, by law enforcement, and our own politics, religion and experiences.

I interviewed the author in his home in Southern California. Surrounded by avocado groves, it's a long way from the streets where he spent so much time "chasing crooks." On a wall near the fireplace is a photo of his three kids when they were little, each wearing one of their dad's "Deputy Dave" khaki shirts, sleeves practically hanging down to the floor.

I use the word "interview" loosely because it was more like being on a ride-along than an interview. Putnam's stories about his years in law enforcement are as adrenaline fueling as any fiction. Characters with names like Black Bart and Indian Joe and Little Willy chase their way through his stories - and those are the cops.

All Putnam ever wanted was to be a cop. At fifteen he joined the San Bernardino County Sheriff's Explorers. At seventeen he attended the ROP (Regional Occupation Program) through the La Verne Police Department. Right out of high school the Ontario Police hired him as a cadet. During the day he filed, ran errands, worked the front desk and took the fingerprints of dope addicts, sex offenders and anyone else who required fingerprinting. But he says his day truly began after work, when he went out on patrol with the officers.

"They let me do ride-alongs. So I'd get off work at five and then I'd ride until 11 o' clock. I'd do that seven days a week for two years," Putnam grins, remembering.

"I actually lived as a police officer at that time, even though I wasn't carrying a gun or any of the equipment. I got into fights with them.... I'd been in a couple of scuffles in school but I'd never been in violence, the kind of violence that snaps and you don't even know it's coming until it jumps on you -- that kind of violence."

The first time violence jumped him he'd been cadet for less than two weeks.

"So violence started intriguing me. Armed robbery in particular. I couldn't comprehend how somebody could go into a store and pull a gun on an innocent person."

When Putnam begins a new story he often asks, "Did I ever tell you this before?" and you shake your head and mentally buckle up for the next ride - which, by the way, is something he rarely did when he drove a "black and white." Takes too long.

"So I pull up in front of the house, jump out with the ram, and a guy opens the door and he sees me and he slams the door shut and I throw the ram right through the door, go to the back room, find a safe, a machine gun, a bunch of money. Everything in the house is brand new. Dope money. We seized the house. We seized the cars. I found two storage unit receipts. This is what happens with narcotics. It's called tumbling. One thing leads to another and before you know it you've been up for 20 hours straight."

When he talks about "chasing and catching the crooks" you can tell how much he enjoyed it. "I was making $700 a month... I was eating macaroni and cheese and sliced hotdogs for dinner but I didn't care, I was having such a good time."

But when he talks about the victims, his voice sometimes catches and he has to clear his throat before continuing. It's clear that his first armed robbery, which took place in a photomat, still haunts him.

"I went there and took the report and this woman was scared to death. I could tell that this emotional trauma was going to impact her for... forever."

The victims motivated Putnam, just as they do Bruno Johnson. And like Johnson, Putnam went where the action was. The more, the better. After four years at Ontario, even though he was making more arrests than anyone else and was on a special operations team, he was ready for a change. So he transferred to Los Angeles Sheriffs Department.

Putnam went to Lynwood. And his experiences there, and in subsequent years as a narcotics expert and all the other branches of crime fighting he was immersed in, are what make him such a credible author.

I asked him how he managed to catch so many criminals in his career and have them put behind bars.

"You take little steps and each step gets you to the next step," he answered.

This is also how Putnam writes novels. Every morning, after coffee with his wife, he writes an average of a thousand words. He's already written more than two hundred thousand words in the Bruno Johnson series. A second book, The Replacements, will be out in February 2015. 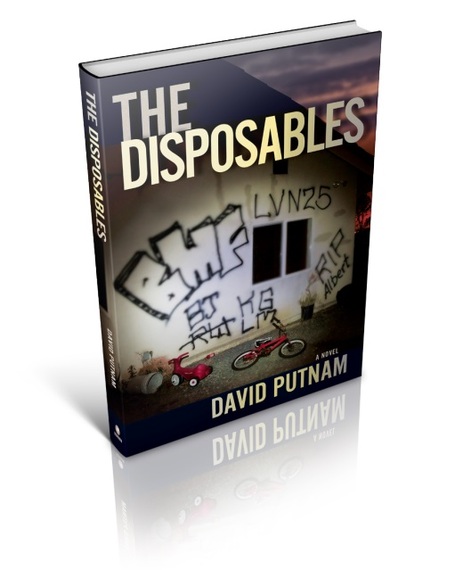