Someone break out the champagne.

After receiving a lot of heat for not representing different ethnicities in its emojis, Apple FINALLY released iOS 8.3, which includes a keyboard with 300 new racial diverse emojis. Now our emojis are actually representative of the skin tones and races of people across the globe. 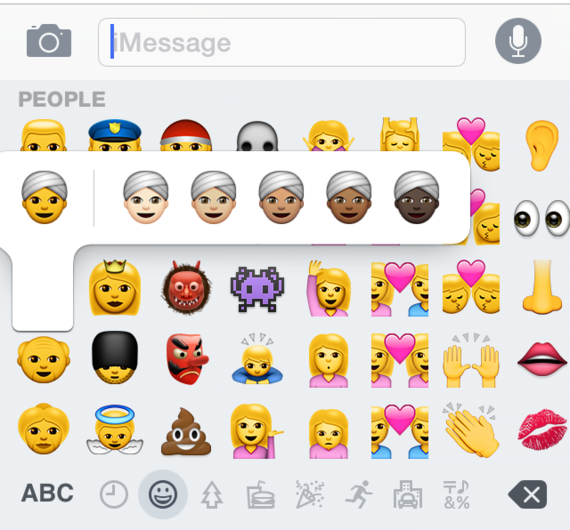 Basically, all the emojis that were "white" are now the same color yellow as the generic smiley face emojis (which makes them look like they've been hit with a serious case of jaundice). But don't worry, it gets better. If you tap and hold on to an emoji on the keyboard, a small bubble of options pops up. You can then choose to change the emoji from its default color. You can pick your emoji from the five different skin tones that are represented. According to the Unicode Consortium, the organization responsible for emojis, "These characters are based on the six tones of the Fitzpatrick scale, a recognized standard for dermatology. The exact shades may vary between implementations."

Apple did more than just add different races and skin tones to the run-of-the-mill, everyday emojis. Any emoji that resembles a human now has this option. The princess, the old geezer, the sassy "you know what I got" girl, even the sports emojis can now be changed to look like the people that actually make up our society.

Same-sex relationships are also well represented on the new emoji keyboard. Earlier versions of iOS boasted cute little boys holding hands with other boys, but that was it in terms of LGBTQ emojis. Disappointing, right? The new update fixes that problem. LGBTQ families of all shapes and sizes are illustrated. The families include two male parents and two female parents with different varieties of boy and girl children.

However, everything isn't fine and dandy. IOS 8.3 doesn't represent all the different types of people we have in this world. Most notably, the new update doesn't illustrate racial couples. All of the relationship emojis and family emojis are the weird, jaundice Simpson-yellow color that can most likely be labeled as "white." There are no black families. There are no Asian couples. There is no interracial anything.

C'mon Apple. It's 2015. If you're going to release an update that claims to represent the races of people in our world, you can't half-ass it. Our world is ever changing. The population is becoming more and more diverse every day. If technology is going to represent our culture, it has to keep up. Apple should have added racially diverse emojis a long time ago. It may have made a small victory by adding different races to the emojis, but we still have a long way to go.

I know it's not reasonable to request that Apple make emojis that represent every single person. There are seven billion people on this planet. We're all unique in our own individual ways. It would be virtually impossible to please everyone.

So why do we care so much about emojis? Why do we as a culture rely on a smiley face or a crying cat to express how we feel? Emojis are another way for us to be convenient. We live in a world that values instant gratification; everything needs to be transferred immediately. Nothing is more convenient and expressive than an image. We use emojis to express our thoughts, our feelings, and, most importantly, ourselves. Thus, they become a part of us.

Emojis make what we are trying to say more relevant. We use them to intensify our emotional expressions and describe what we can't say with our words. Like it or not, emojis are universal. No matter what language you speak, you can pretty much understand what an emoji means. If emojis are universal, shouldn't they resemble the variation of people they represent?

Maybe emojis are symbolic. Our ancient ancestors started communicating through symbols, pictographs, and carvings etched into walls. Maybe emojis signal a full circle. We began communicating through symbols, and we've "evolved" to this continuation of talking through images. The only difference is that the present day world is a lot more diverse, so our communication symbols should illustrate that. Maybe one day our emojis can represent who we are as a world. For now, I can only request that someone makes a taco emoji so I can better convey my answer to "What do you want to eat?"