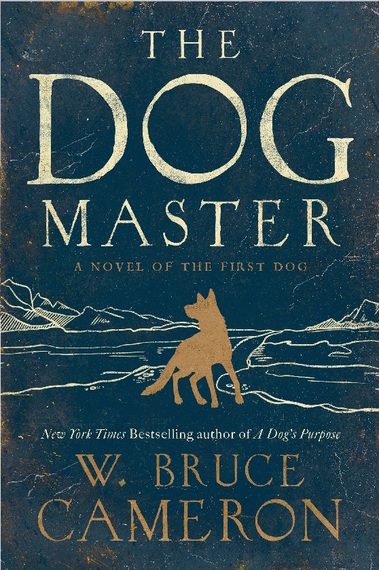 When I first met author W. Bruce Cameron, I spit goat cheese all over him. Now, in case, you weren't 100% sure, this is not something people generally do in fashionable social circles, at least in our country, and certainly not when they're trying to make a good impression on a famous writer. But Bruce is a funny guy and made his living as a syndicated humor writer prior to becoming an author and so, when he happened to say something funny, it was at the moment that I had a mouthful of goat cheese salad in my mouth.

The good news is, Bruce was utterly enchanted by my goat cheese spitting ways and we became good friends. The better news is, he was wearing a white shirt at the time so the goat cheese pretty much blended right in.

Bruce: And by the way, I am not sure I was utterly enchanted. I'm remembering getting hit in the face with a blast of cheese spit, but then I go blank from PTSD. So maybe I was enchanted, let's go with that.

Tracy: Moving on. This incident happened about six years ago and in that time, Bruce has written 6 (I'm not kidding), SIX books, including the New York Times Best Seller, "A Dog's Purpose," and his latest masterpiece, "The Dog Master." In the same six years, I have written one book, cleaned my car seven times, and spit goat cheese on at least one other famous person. Clearly, Bruce has been a tad more productive than I have.

Bruce: So 2010 was A Dog's Purpose, and since then I've published Emory's Gift, A Dog's Journey, The Dogs of Christmas, The Midnight Plan of the Repo Man, Ellie's Story, and now The Dog Master (author's plug: And they are all available right now on AMAZON!). I also cleaned my car at least ten times and I haven't spit on a single person.

Tracy: Thanks for making me feel better. Anyway, during that same time, you got a dog named Tucker, who is so cute you could write a book about him. Oh, yeah, you did. Well maybe it's not exactly about Tucker, but Tucker has certainly provided endless inspiration for your dog-centric books. Was there another dog in your past that made a lasting impression on you or was it just watching Lassie or, probably based on your age, Rin Tin Tin, that made you want to explore the relationship between man and dog?

Bruce: I didn't used to look this old until my face got abraded with goat cheese. No, what got me interested was what I have observed in the relationship between people and their dogs. The loneliest, most down-on-his-luck person can have a dog who adores him. The most bitter, sour person can light up with joy when he sees his dog. It is magical and, as The Dog Master reveals, it is biological--we evolved together.

Tracy: While the story is clearly a work of fiction, it is not so far-fetched that you can't imagine the possibility that something very similar night have happened in the relationship between man and wolf all those years ago. Yes the people in The Dog Master face far different challenges than we do today, (when was the last time you had to deal with a Wooly Mammoth going through your garbage) but the struggles we have as a society are similar themes even in today's world. True, we may not be fighting lions for our food, but we can count on our four legged best friends to stand by us no matter what, although, if we're talking about my dog, we can count on them to run away when true danger threatens.

Bruce: Wait. How do you keep the mammoths out of your garbage cans? But yes, our challenges have evolved, but so have our dogs' responses. They provide emotional support, they search and rescue us, they guide our blind and protect our children. Back during the most dramatic and challenging time in our history, when we first came together with wolves, we had no idea that it was changing everything, but we literally evolved together. Without us there would be no dogs, and vice versa.

Tracy: So was The Dog Master something that was percolating in your head for a while or did the idea just pop up and you said to yourself, "Hey, this first dog thing would make a great story?"

Bruce: One night I was trying to understand why I was having trouble sleeping and I realized that Tucker was trying to shove me off the bed, or at least to get me to move over so that he could be more comfortable. And I started thinking about how this wasn't a person, this was an animal, with teeth and claws and dog breath--how did it happen that I invited this animal to hog all the pillows? So I started researching about the first cases of domesticated wolves, which happened about 30,000 years ago, when I was in Jr. High.

Now, 30,000 years ago the glaciers were burying the planet, with ice more than a mile thick--sort of like last winter in Boston. These were tough times for humans, with fierce predators hunting us and starvation threatening our lives. And wolves were our mortal enemies--yet somehow, we wound up partnering with them. When I realized how dramatic and dangerous a time it was, when I found out how completely improbable it was that we would see these fierce creatures and want to be their friends--yes, I knew it would make a fantastic story.

Tracy: As a dog owner and dog lover, I was not only enthralled by your story, but as a writer, I was also intrigued by the fact that you wrote The Dog Master while also working on a screenplay for another one of your books, helping your wife promote her independent film, and fending off other cheese spitting fans who stalk you on a regular basis. Can you talk a little about this little screenplay you're writing for A Dog's Purpose, because, as they say in Hollywood, It's a Big Freaking Deal.

Bruce: The script for A Dog's Purpose is, as they say, in the can. Filming started August 17th and I am pleased to announce that I will have a starring role, per the producer, "over (his) dead body." Sounds like a sure thing.

Tracy: Before we get off the subject of the dog books, I thought we should take a brief interlude and elaborate a bit on how good a friend I am for doing this interview. That's not really a question. More of an aside.

Bruce: You are an AMAZING friend and if you were here I'd spit all over your face, which is apparently how people express affection in New Jersey. I am thrilled to be the subject of your blog, as I am a huge fan of Lost in Suburbia and often get phone calls from your psychiatrist.

Tracy: Pay no attention to him. He's trying to get a role in one of my books. OK, one last question. Will there be a sequel or at the very least, will you be getting a pet wolf?

Bruce: This is an epic story, based on true fact, about what might very well have been the most important event in human history. If I'm right, the only reason our species is still around is because of our friendship with the canines. To tell it, I had to paint on a canvas that included tribal warfare, betrayal, love, murder, and violence. You can't cleanly end a story like that: if given the opportunity, I will write a sequel.

Tracy: That would be great! I hated for it to end. I think The Dog Master is an amazing story for anyone who's ever loved a dog, stared into his soulful eyes, and wondered where their incredible bond came from. A truly magical journey, 30,000 years in the making!

Now in stores: The Dog Master. A story never told, based on historical fact. How humans overcame long odds to survive, thanks to our friendship with wolves. The first dog!
To order your copy, click here.
To follow The Dog Master on Facebook, click here.