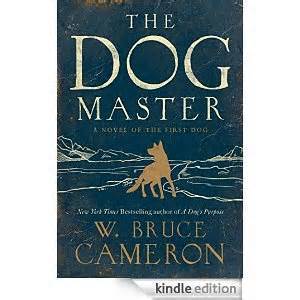 The distrust and fear between human and wolf are pitted against their shared desperation for survival. A natural bond forms; wolves are pack-oriented and humans are tribal. This is solace, protection, and support, much how pet dogs fill those needs for many in modern times.

We think we rescue dogs, but in truth, they rescue us.

It's storytelling at its best. Cultural rituals and ideas of "community good" create drama along with fighting predators and the scarcity of game during the Ice Age. The human mindset during primitive times sets the stage for the need for animal companionship.

Cameron said, "The continent is Eurasia and the time is around 30,000 years ago. When I was studying what we knew about ancient, pre-historic cultures, I read some work on modern tribes--modern, meaning, studied in the last several hundred years.  There is an interesting similarity between some Native American tribes and other peoples who have not been subsumed into European culture."

Not so different from today, love, yearning, fear, duty, prejudice, manipulation and dominance play out in The Dog Master. Personal sacrifices abound: forced marriages for the good of the tribe, annual migrations, child mortality, and the jealous plotting against rivals.
Food scarcity forces hunting in forbidden territories.

Cameron said, "One of the things that emerged from my studies of people who are removed from the modern world is how territorial tribes are, mainly as a way of sustaining peace.  They are very conscious where another tribe's territory is and will take pains not to trespass unless they have to, the way the Kindred are forced to invade Wolfen land in search of prey."

In The Dog Master, each tribe struggles as an archetype. The Kindred are cooperative, but hold fast to traditions. The Wolfen pattern life on the ways of the wolf, seeing the animal as god-like, and yet are open to new hunting modes. The Cohort are bent on destroying any competition for food. The Frighteneds are fear-based, seeking to stay invisible to survive.

Cameron noted, "The Frighteneds are the Neanderthals.  We know that the Neanderthals were stronger and faster and had bigger brains.  The standard way to depict them would be as fierce cave men. I thought, though, that it would be really interesting to explore what would happen if they were timid and felt threatened by homo sapiens."

In the pivotal story, fear and prejudice force a young man away from his clan. Mal is born with a deformed foot, and a manipulative elder decrees the teenager carries a curse and must be banished from the Kindred.

Elsewhere, a female wolf is wounded by a hunter and crawls back into a den to care for her newly birthed litter. Now crippled, her chances to live are slim. During his exile Mal befriends the she-wolf and brings food to her and her lone surviving pup. Kinship is created. Together, wolf and man survive, supported by the other's skills. Cameron does a laudable job of weaving together separate story lines that encircle the early relationship between humans and wolves.
Scientific research supports Cameron's book premise. Excavations at the Goyet Cave in Belgium show wolf-like dogs were domesticated 31,700 years ago. The research, which will appear in the Journal for Archeological Science, indicates that a great diversity of wolves once existed, which may account for the variety of dogs today. Also, Paleolithic era footprints of a child and a wolf, as well as "torch strikes" on the cave wall, indicate the pair walked together inside the cave, guided by carried light.

The Dog Master is a unique, vivid story of how canine companionship came to be and in no small way, saved humanity as a species; a truly inspired read.

The Dog Master by W. Bruce Cameron, published August 4, 2015, is available on amazon.com.

Contact Suzette Martinez Standring: suzmar@comcast.net or visit www.readsuzette.com
Follow her on Twitter: @Suzette_Stand
She is syndicated with GateHouse Media and is the award winning author of The Art of Opinion Writing and The Art of Column Writing.