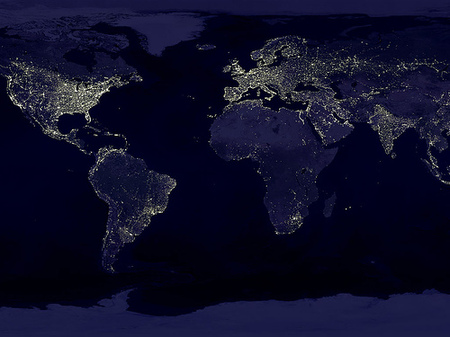 If this were a novel it would begin with... After two world wars, they knew a brief calm of 70 years before the sins and ghosts of their past came back to strike them. This brief peace was completely eclipsed by the worst storm that ever occurred destroying them.

Make no mistake, the next great war that occurs will use chemical, biological, and nuclear weapons. The repercussions of this will impact all the rest of human history. It will be devastating, there will be no winners, and again, make no mistake... it is coming, and soon.

We stand now in a world that is changing so rapidly that nobody can predict with any weight or authority what will happen in the coming ten years, let alone the coming generations. If history is any predictor, the world is again on the brink of war.

We are watching a depressingly bleak international setting with provocations being seen increasingly, baiting that is eerily similar to Germany's invasion of Poland on September 1, 1939. Russia invaded Georgia in 2008, and Ukraine in 2014. In recent years Russia has been on the rise militarily and these provocations signify future actions just as Germany's did.

More to raise the red flag, Germany made deals, sanctions, cease-fires, and truces with Europe before breaking them just as Russia, North Korea, and Iran has.

China is expanding its empire by creating artificial islands for military purposes in contested waters. They have been verbal with American pilots flying over these areas attempting to force them from these regions. There have also been incidents of the Chinese invading American waters off Alaska. This is not to mention the Chinese hacking incidents of American military institutions that has been prevalent.

North Korea's question is no longer, "Do they have Nuclear Weapons?" It is now, "How many do they have, and how powerful?" As you can imagine, on May 25th, 2009 when North Korea conducted its third and most powerful nuclear test, the organized world became nervous. Remember also that North Korea hacked Sony Entertainment because of a comedy movie and absolutely brought them to their knees. If the U.S. had done this to them, it would have been seen as an act of war. Also with their increased rhetoric of absolute destruction of any and all enemies, their area is one of tremendous concern.

Iran, has in recent months caused President Obama many headaches. The President's philosophy of a nuclear arms agreement because countries that talk rarely shoot at each other has not quelled many fears from Jewish-Americans and the entire country of Israel, who Iran has vowed to blow off the map.

"The destruction of Israel is the idea of the Islamic Revolution in Iran and is one of the pillars of the Iranian Islamic regime. We cannot claim that we have no intention of going to war with Israel!"

Ahmad Alamolhoda, Member of the Assembly of Experts.

Iran is a country that could be Obama's greatest legacy of his legacies downfall, and it will be nothing in between. If past rhetoric is to be believed, Iran is biding their time before they are able to attack. With Russia's recent friendly overtures to them, as well as North Korea's, this could be the eventual powder keg that Iran is waiting on. If it turns out that World War 3 happens and this deal is what stops Iran from going against the U.S. then President Obama's 11th hour effort will be heroic. In any case, his attempts at peace should be applauded. War should always be the last resort, always.

The greatest problem, and question, as always, is the Middle East. With the Arab Spring occurring, yet extreme and very real American and western resentment, what is the way forward? Syria has been civil war torn and has a very real and terrible humanitarian crisis on its hands. Iraq and Afghanistan are facing similar situations. This crisis has spilled all over into Europe as these citizens flee their homes to escape their war ravaged homelands. If there is a proverbial 'powder keg', it is the Middle East. Tensions run high, and any moment could be the spark that ignites the world.

Lastly, terrorism is still in the picture and the group calling themselves ISIS has again brought this issue to the forefront. Their brutality has shocked a post 9/11, post Al Qaeda world. Granted, Al Qaeda is still worth keeping an eye on, but it is nowhere near the strength it was. ISIS is gaining momentum in a way Al Qaeda never imagined. If ISIS were to get WMD's, that could also be an extreme nightmare scenario and it is not impossible that they could.

Is the only way to achieve peace in the Middle East by raising an American flag over every Arab country? War should be the last resort, but the great chessboard of the world is maneuvering against the United States, and analytically, we are wholly unprepared to go to war if our enemies unite. If the nuclear question is on the table, and this is not meant to instill emotion, it could be the end of the humanity.

The world is becoming dangerous again. Countries are maneuvering to be world powers that play by a whole different set of rules. This isn't an idea of a crisis, this is an imminent issue that is closing in on the American ideal. The very American way of life, as well as the free world at large, is in a critical threat of peril.

The only path forward for the nations of the earth is to find a peace that can sustain. However, it doesn't seem possible that this can happen. The drumbeats of a world war are approaching.

Be sure to comment and have a great debate.