All three of our kids were conceived using sperm from the same anonymous open donor. We had a lot of reasons for choosing our donor, ranging from the frivolous (like me, his favorite sports team is the Red Sox and he loves mint chocolate chip ice cream), to the more practical, such as traits we hoped would make way into our kids (intelligent, artistic, and athletic).

Ultimately, we chose our particular donor because he sounded a lot like me, physically and in terms of personality. Even though I knew my kids would not be genetically related to me, I was hoping I might see myself in their eyes if I chose a donor similar to me.

In the almost six years since that fateful decision, I have learned that I probably shouldn't have worried so much about choosing the "right" donor. Regardless of the lack of genetic connection, my kids are undoubtedly a reflection of me. So much so that my wife, Kendra, and I often joke about the uncanny ability of my family's genes to transcend time and space.

Yet as my initial fears that my future children would not bond with me, or that I would not see myself in them, have long since been left to the wayside, I have developed a new fear... well, more of a trepidation.

Because at some point my kids will put two and two together and realize that mommy and mama don't have the necessary equipment to make a baby.

We've danced around the topic with Addison, our five-year old, each time truthfully answering her questions about where babies come from, though with no extra explanation about her own conception. Despite lots of questions over the last few years, she had not made the connection between the biology of a sperm and egg joining to make a baby with the fact that her moms only have eggs.

We were driving home, the three kids in the back of the minivan, me up front. Kendra was at work. I don't even remember how the topic of how babies are made arose, just that suddenly Addie was painfully quiet, clearly thinking through the stumbling block of how the heck her moms made babies without sperm.

Wait. Mama. So, how did you get the sperm?

All I could think was, "how is this conversation happening without Kendra here too?!"

I decided to just go with the truth.

Not all people have eggs or sperm, so sometimes people will give their eggs or sperm to people who need them. So Mommy and I got sperm from a man who donated it to us. And we used it to make all three of you.

Do you know him?

No, but we know about him... Do you want to know some things about him?

Well, he loves the Red Sox and his favorite ice cream is mint chocolate chip.

Mama, did you know that mint chocolate chip ice cream isn't my favorite anymore? It's cotton candy. I really love it.

I exhaled slowly, grateful the first donor talk went so smoothly. I don't expect it always will, and I dread the day I hear, "you're not even my real mom!" during a fit of teenage angst.

But until then, we are going to keep answering honestly, and being open about how our kids were created. Because hiding it would make it seem shameful or wrong, and I love our story. And I think if we ever meet their donor, I will adore him. And not just because we share a love of mint chocolate chip ice cream and the Red Sox, but because his selfless gift led to the creation of three incredible human beings... 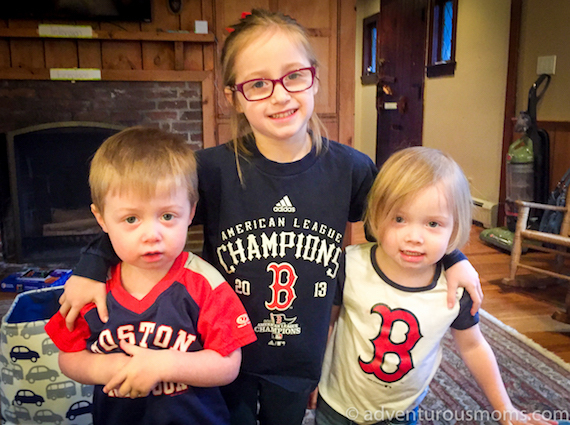