The Doorway Shot
The lasting influence of film's most famous doorway shot.
By Jacob T. Swinney 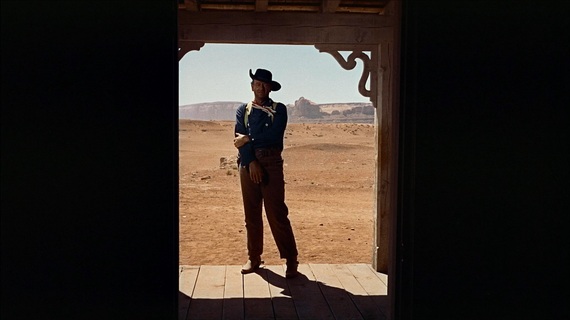 The concept is a simple one: frame your subject in the middle of a doorway. Despite its simplicity, the "doorway shot" tends to bear heavy significance. In this video, watch a variety of doorway shots that seem to have one thing in common--the separation of interior and exterior that represents a much larger symbolic threshold.

If you're like most film-lovers, when someone says the "doorway shot" you probably immediately think of John Ford's The Searchers (1956). In fact, simply searching for "doorway shot" on the Internet results in hundreds of pictures from the film. The Searchers opens and closes with arguably two of the most iconic shots in film history, both using doors to frame characters. In the final shot of the film, John Wayne's character, Ethan Edwards, approaches the entrance of a home as his family and friends funnel inside. Nearly silhouetted, Ethan stands in the doorway, reluctant to enter the home. Rather than joining everyone inside, Ethan turns around and walks alone into the barren West--a much less romantic and heroic "ride off into the sunset" ending. Ethan does not belong inside, and the doorway serves as a visual representation of the threshold between civilization and savagery. Now, does this specific instance of symbolism in The Searchers apply to the many instances of the "doorway shot" in other films?

While seeing any character framed in a doorway may immediately recall The Searchers (especially in a Western), not all uses of the shot are paying homage to Ford's classic. But even if a direct connection is unintentional, there often seems to be glints of the same significance and symbolism. Take Paul Thomas Anderson's There Will be Blood (2007) and The Master (2012) as two examples. In There Will be Blood Daniel Plainview approaches the doorway of a church as Eli's flock makes their exit. Here the doorway serves quite literally as a boundary between two worlds. As an atheist, Daniel does not believe in Eli's "false prophesy" and "superstitions," and therefore resents the church and everything represents. Daniel remains framed by the doorway, never entering, staying on his side of the threshold; his side being the plains of Little Boston that he is rapidly extorting. In The Master, Freddie Quell is chased out of a town after a man is poisoned by Freddie's home-brewed concoction of various toxins. As he runs away, the doorway frames Freddie in his frantic escape through the cabbage fields. Suffering from war trauma, Freddie seems to never have an easy time fitting into society. His unpredictable nature prevents him from finding a companion and his sudden rage-filled outbursts prohibit him from holding a job. In this particular scene, Freddie is literally forced out of the door, or society, and is left to wander the world aimlessly. 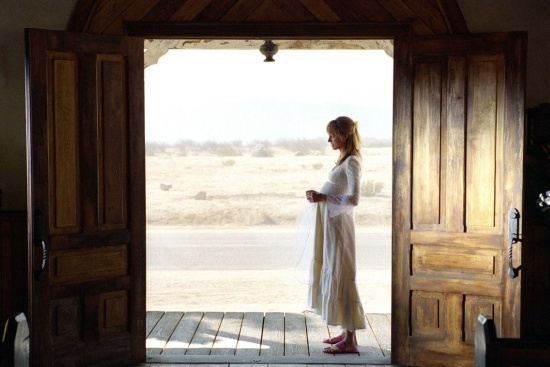 Another suitable example is Quentin Tarantino's Kill Bill Vol. 2 (2004). Tarantino is a master of homage, and I believe the filmmaker directly references Ford's masterpiece twice in Kill Bill Vol. 2--once early in the film as The Bride exits the church on her wedding day, and once later on as she exits the trailer in the desert. It's worth noting that the latter is of extremely similar composition to the closing shot of The Searchers, and even features the door slamming shut on its own. While this shot seems to bear heavier visual resonance to the final moments of The Searchers, the earlier shot possesses heavier symbolic connections. The Bride, pregnant and ready to be wed, hears a noise outside of the church and walks to the doorway to investigate. In a beautiful black-and-white shot, she stands in the wooden doorway that is strikingly similar to the doorway that frames Ethan Edwards. In passing through this doorway, she is confronted by Bill, a dangerous assassin and her former lover. Much like Bill, The Bride was also a dangerous assassin, but decided to give up her violent life when she became pregnant with Bill's child. Knowing that Bill wouldn't approve, she fled to a life of normalcy without informing the father of her unborn baby. In this scene, a civilized life and a life of savagery are very much literally separated by a doorway. In walking through the doorway of the church (her civilized life), she is forced to revert to her cruel and violent former life.

Discover and watch thousands of the greatest indie, foreign, and documentary films.