Three days in Los Angeles: an unknown well-known artist, Crumb meets God, Van the (young) man, a pastrami sandwich to cry for, and an easy dinner.

Charles Burchfield at the Hammer: Heat Waves in a Swamp. At the Hammer Museum until January 3,
2010.

How do I not know of this wonderful, entirely American artist? Born in the 1890s, died in the late 60s, as a young man experiences a crazy burst of creativity -- 450 water colors in a little more than a year -- in his mid-20s, who then marries and spends seven or eight years in a career as a wallpaper designer (I wish I had wallpaper so wonderful when I was growing up; Lord knows what might have happened to my impressionable mind), quits to paint seriously,
becomes America's favorite naturalist painter (Life magazine does a story, etc.), decides he's become dulled, unshackles his imagination (asks in his diary "how will I make a living?"), and revisits the original 1917 watercolors as inspiration and foundation for a stunning burst of unhinged fantastical nature paintings that glow and explode with life.

Here's an image from the Hammer website but the original is breathlessly alive in ways that this reproduction cannot hope to incorporate. 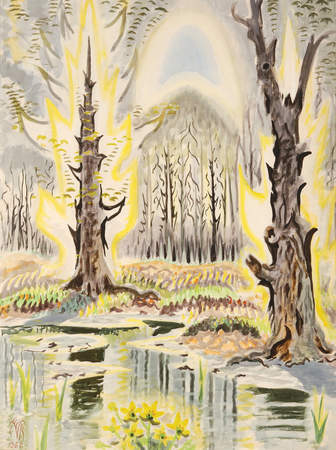 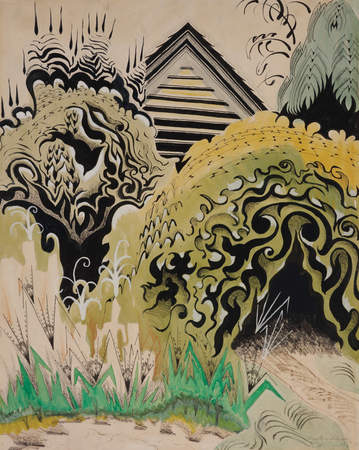 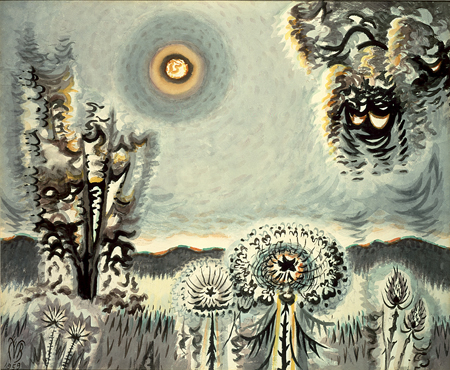 Edward Hopper, his friend, wrote: "The work of Charles Burchfield is most decidedly founded, not on art, but on life, and the life that he knows and loves best." But that's not entirely true. Yes, founded on life, but unbounded by it.

And in the same museum, all of R. Crumb's intensely drawn (with quill dipped in ink, no Rapidograph for R.) illustrations of the Book of Genesis, all fifty chapters. 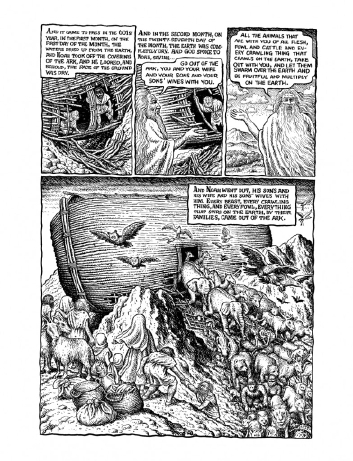 Crumb says that he doesn't accept Genesis as a source of truth, but something in the stories compelled him through several years of painstaking work. Powerful, bewildering at times, shocking in the plainness of universal need, and brought astonishingly into the realm of human feeling by Crumb's art.

The next day I had a hot pastrami sandwich, chopped pastrami in some kind of peppered slightly goopy sauce in a panino, at Surfa's cafe that was so good, my eyes filled with tears. (It's been an emotional week.)

In the New York Times, the story of the impending release of hundreds of concerts over the decades of the Newport Jazz Festival (live unheard Thelonius Monk coming next Monday!) led me to Wolfgang's Vault, a repository of live concerts from the Bill Graham archives and other hot spots, and thence to Van Morrison's concert at the Fillmore, in 1970, when this 24-year-old Irish boy, with the release of Moondance just two months back, lays himself open, with a great band and the restless command of the moment that has marked his live work for forty years since.

And my easy dinner? Thin slice an onion pole to pole, saute in olive oil until light brown, add a little garlic and saute until you smell it, then diced tomatoes (mine were end of season Celebrity and Brandywine from Ed Munak's at the SM Farmer's Market), and a couple of big handsful of fresh baby spinach. Once that's cooked down, a half can of cannellini beans, a little grated Comté cheese, and some good canned tuna (oil-packed if you will). Salt, black pepper, red pepper flakes, a little tomato paste, a very little anchovy paste. Let it mellow for a minute.

A glass, maybe two, of red wine and listen to Van unwind through thirteen minutes of Cypress Avenue.

After I had my heart operation a couple of years ago, a bunch of doctors told me, 'You're lucky to be alive." Hard times in the movie business, yes, but for so many reasons, I'm lucky to be alive in LA right now.