I've been a VICE-loving broad since I was about 13 -- so at the just-ripe age of 32 you could call me a devotee. As a buck-toothed, flat-chested, polyester-golf-pant wearing teenager, I was all about embracing the Other. And in Lawrenceville, New Jersey (a semi rural outpost of Princeton), the Other was largely about looking and behaving like you weren't supposed to. Especially as a girl.

In particular, this meant being loud, vulgar and unapologetically weird. Being shunned and snickered at by the proverbial cool kids -- well-coiffed, well-muscled, and well-aligned -- felt like a small but potent choice.

I think at that age, one's identity is often solely defined by what you didn't want to be--it was less about choosing what you were and more about rejecting what was offered.

For me, VICE felt like this green -- if fetid -- hill where people did and said whatever they wanted. They were living Gonzo journalism -- thrusting their necks and d*cks out into the world without apology, without explanation, without fear. Best of all, they were getting away with it. It was truly a thing to behold.

Sure, much of it was infantile, offensive, vulgar, and cruel, but even at 13 I knew they knew that. It was designed to provoke, designed to induce cringing and guilty laughter. Their tongues were bulging in their cheeks and I couldn't get enough.

I also understood it was a boy's club. At the time their most popular content seemed to be their infamous Dos and Don'ts list -- taken of course from the pages of vapid fashion rags and turned the fuck on its head.

They would basically take a series of street shots or party photographs and seemingly arbitrarily put them in the Dos or Don'ts category. (Although those In The Know felt they knew why, of course.)

Not too surprisingly (as VICE was founded by the unabashedly un-PC, swaggeringly chauvinistic Gavin McInnes, Suroosh Alvi, and Shane Smith), many of the jokes revolved around how hot/boneable a particular woman was. But they also took aim at stereotypes and proverbial douchebags in an effort to invert the conventional power structure of desire. They were speaking to every angry eccentric who spent their days rolling their eyes at the chosen Beautiful People and thinking to themselves, "THIS IS NOT WHAT THE WORLD SHOULD VALUE!"

The Dos and Don'ts lists (and yes, I owned at least two bound collections of said lists) served as my irreverent voicebox -- the captions read like your brilliant, if grating, best pal who spent their afternoons screaming LOOK AT ME! while lifting their skirt and giving the middle finger to an entire strip mall.

I think it made us all a bit braver. They bullied the bullies and celebrated freak-dom. They were also just funny as hell.

The meek shall inherit the earth? I think not. 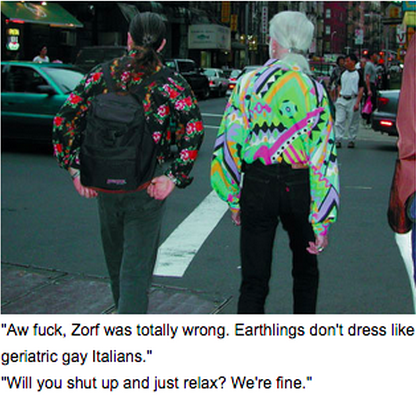 and get away with it -- in print no less -- the rest of us could comfortably continue to reject the status quo. And clearly, the cheese doesn't stand alone here. VICE is currently valued at $4 billion and grows. Every. Day.

So in short? I drop a knee -- and trous -- in honor of my love for VICE in an offensive homage to their newly launched feminist site, Broadly. 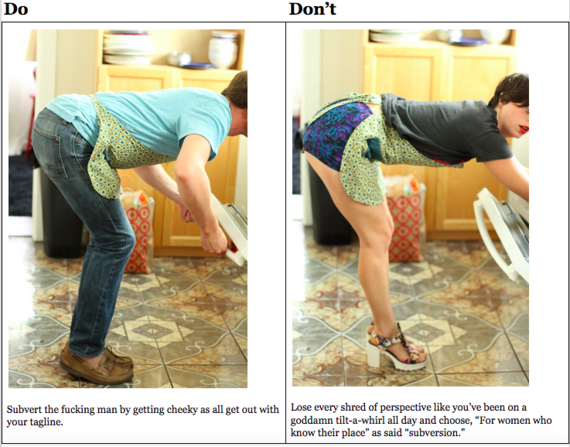 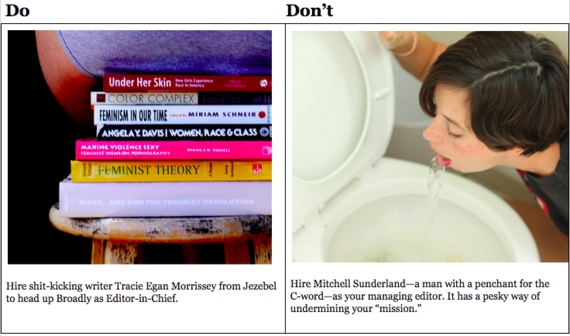 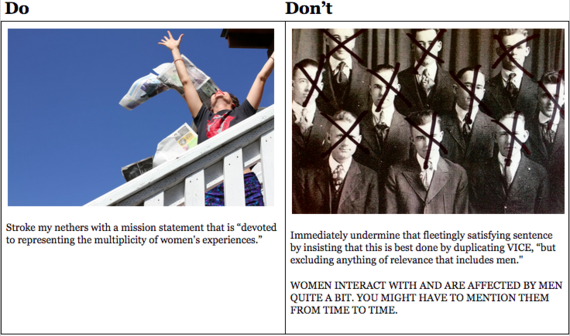 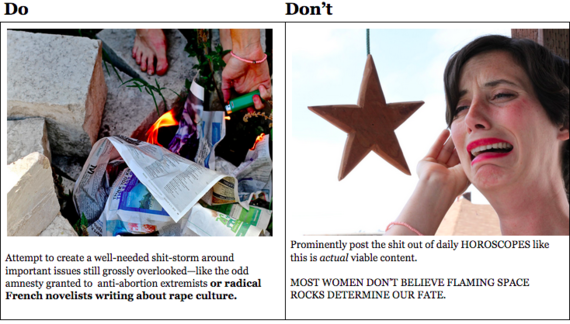