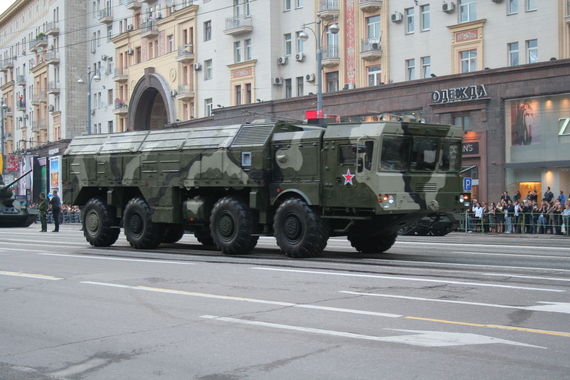 As someone who loves Armenia, my first response to the news that my country had purchased advanced Russian missiles capable of hitting targets hundreds of kilometers from Armenian territory was: "Good -- they will make us safer."

But the more I thought about it, the more I wondered whether that was true.

The reason is that Iskander 9K720 missiles can carry nuclear as well as conventional warheads, and Armenia has the scientific capability and material to make nukes.

And some Armenian military and civilian leaders have hinted that the country is actually developing nukes.

I began asking myself whether the advanced Iskanders' presence would not only precipitate a missile race in the region, but also increase the threat of nuclear proliferation.

The first rumors that Armenia had advanced Iskanders came three years ago.

They were unconfirmed until 9K720s rolled past the reviewing stand at a military parade two months ago marking Armenia's 25th anniversary of independence. The event in the capital of Yerevan drew President Serzh Sargsyan and most of the top civilian and military leaders.

The 9K720s that Armenia acquired are capable of landing within seven meters of their target. They also have the capability to evade enemy missile defense systems.

But the most salient fact is that they have nuclear capability.

If Armenia weren't contemplating developing nukes, then nuclear-capable Iskanders would be a cause for concern in the region, but not consternation.

But Armenian leaders have made a number of comments this year that suggested that nukes might in the cards.

Retired General Arkadiy Ter-Tadevosyan said on March 27 that Armenia was developing a weapon that could unleash great destruction.

On April 16, Acting Defense Minister Norat Ter-Grigoryants, the retired head of Armenia's armed forces, said nuclear weapons could play a role in the country's defense as a deterrent and a means of retaliation.

At one point in a press conference on April 29, former Prime Minister Grant Bagratian said unequivocally that "Armenia has a nuclear weapon." He walked back that assertion later by saying that the country "has the capability of creating a nuclear weapon." The walk-back failed to comfort neighbors in the region and Armenians who worry about nuclear proliferation.

Armen Rustamyan, head of the Dashnaksutun Party, said on May 10 that there were grounds for Bagratian's initial comment on April 29 that Armenia has nukes. Rustamyan quickly added: "I will not say anything else -- this is a military secret." The Dashnaksutun Party is part of Armenia's ruling coalition, which means that Rustamyan has access to the country's military plans.

All of these comments came within a few weeks of an early-April outbreak in fighting between ethnic Armenians and the Azerbaijan military over control of Nagorno Karabakh.

The conflicting claims to the enclave led to a war between the two sides between 1988 and 1994. It ended with an uneasy truce that held until about five years ago, when a series of flare-ups began.

But others note that Armenia has both the scientific capability and the material to make nukes.

The country has had a nuclear power plant at Metsamor, 36 kilometers west of Yerevan, for four decades.

The scientists and engineers running the plant would certainly have the knowledge to make nuclear weapons.

And the plant uses bomb-capable fuel. That's apparent from the arrests of a number of Armenian nationals who have tried to smuggle radioactive material out of the country in the past decade.

The smugglers' aim, according to law enforcement officers in Armenia and neighboring Georgia, where the arrests took place, was to sell the material to terrorists planning to make a dirty bomb.

The fact that Armenia has the brainpower and material to make nukes, and now the Iskander missiles to deliver them, is making its neighbors nervous, I've read.

Ironically, one is Iran, which agreed in a celebrated deal with the West in 2015 to give up any plans it might have had to make nuclear weapons.

It would be terrible for the region and the world if other countries' fears of a nuclear-armed Armenia prompted them to begin building nukes.

That would mean that the purchase of the Iskanders that were supposed to increase Armenia's security actually did the opposite.