Medtronic is as American a company as they come. The surgeon who created its original technology was born and raised in Minnesota, where he lived his entire life. He was educated at a public university there, which is where he eventually conducted his research.

Medtronic's workforce was educated at American schools. Its products have been carried over American roads and rails for decades. Its medical devices continue to be purchased by American government insurance programs like Medicare and Medicaid, as well as private insurance premiums paid by American workers and their employers.

And if Medtronic's management has its way, the company will soon become Irish.

Medtronic's biggest customer is the United States government. How does it expect to get away with a move like that?

Because everybody evades their taxes nowadays -- at least in the corporate and billionaire crowd.

As French economist Gabriel Zucman observes, society has experienced "a profound shift in attitudes" toward taxes since the 1980s. Before then, the behavior of a company like Medtronic -- along with General Electric, Starbucks, Walmart, Apple, and dozens of others -- would be the source of public embarrassment for its executives. But, as Zucman rightfully observes, Reagan-era anti-government rhetoric soon made it socially acceptable for corporations and extremely wealthy individuals to evade their taxes.

Zucman, a student of the now-famous Thomas Piketty, became curious about the fact that the world's balance sheets seemed to show more liabilities than assets. As Jacques Leslie wrote in the New York Times, it was "as if the world is in debt to itself." Something invisible was out there, like economic dark matter warping the global financial universe.

Zucman wrote up his results in a short book called The Hidden Wealth of Nations, which quickly became a French best-seller. (The Piketty crowd apparently has a penchant for best-selling books whose names are a play on classic economic titles -- see Capital in the Twenty-First Century.)

The Lawlessness of Large Numbers

Zucman's findings were striking. As Leslie puts it, the economist "has put creditable numbers on tax evasion, showing that it's rampant -- and a major driver of wealth inequality." (A version of the book is here.) Among Zucman's findings:

Zucman also found that $7.6 trillion of personal wealth is hidden in tax havens, which amounts to 8 percent of the world's total personal wealth. He estimates the global tax revenues would increase by more than $200 billion if these tax avoidance practices were ended.

Strikingly, Zucman also disproves the myth that "our country is in hock to China." If the wealth and tax havens were properly measured Europe would become a creditor, not a debtor, and US indebtedness would be cut in half (from 18 percent of GDP to 9 percent).

Tax havens contain so much wealth that they are distorting the world economy. But they are not for the average man or woman. As Leslie notes, "only multinational corporations and people with at least $50 million in financial assets usually have the resources to engage in offshore tax evasion."

As a result, this practice does more than just starve governments of needed tax revenue. It also makes the problem of wealth inequality even worse.

They're not necessarily breaking the law, but companies like Apple -- and perhaps soon, Medtronic -- are certainly cheating. The esteemed Oxford Dictionary defines "cheating" as "gain[ing] an advantage over or deprive of something by using unfair or deceitful methods."

When these companies use American resources to become American success stories, and then refuse to pay American taxes, that's unfair. It may not be illegal -- at least, not after their highly-priced lobbyists game the system for them on the front end while equally high-priced lawyers cover their rear ends. But it's wrong just the same.

It's also widespread. Thomas L. Hungerford of the Economic Policy Institute (EPI) found that "about 60 percent of multinational corporations' foreign-source earnings and profits come from countries in which the firms have little business activity, evidence that these MNCs are using tax havens to avoid paying the U.S. corporate income tax."

Offshore tax dodging can work any number of ways. Here's one: Imagine that a typical wage earner -- me, for example -- could take advantage of the tactic Apple uses. I could create a separate "company" for myself, perhaps in Ireland, and then tell the IRS that all of my earnings were being paid in royalties, or usage fees, or other gimmicky charges, to "O'Eskow Inc. of Eire."

I would pay no US taxes on my earnings until I decided to "repatriate" them back to the United States -- although, as a practical matter, most of the money would probably be here anyway, in an "O'Eskow" bank account. This kind of scheme is known in the business as a "Double Irish."

The Luck of the Corporatish

That's the Apple scheme made simple. And we haven't even gotten into the variation on this theme they call a "Double Irish with a Dutch sandwich," which is also popular among other Silicon Valley tech companies. That isn't something you can eat (although it can be used to deprive government of the funds needed to feed the poor).

Medtronic wants to do something slightly different. Right now it's holding billions of dollars in overseas accounts, much of it presumably as the result of Apple-like moves. Now Medtronic is planning to buy an Irish company with that money and, in a move which is called an "inversion," make the Irish entity the primary corporation. They win, their country loses.

Not that Medtronic expects to actually move. In fact, the company says it will hire more people in the US. (Maybe its senior executives don't feel like moving.) Medtronic also promises to invest $10 billion in the US over the next 10 years.

But then, it implicitly promised not to defraud Medicare too. And yet it did, paying a $75 million settlement when the fraud was discovered.

There's a simple solution to all of this: end tax havens and make corporations pay their fair share. After all, after-tax corporate profits are at or near record highs: 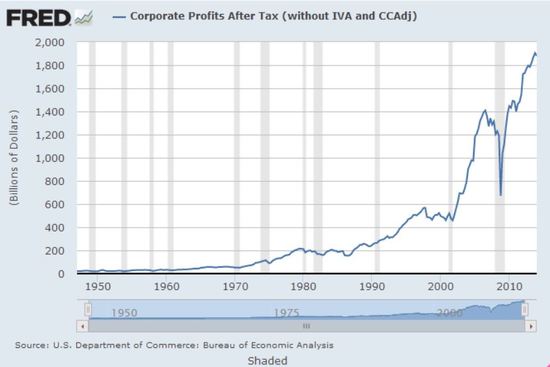 The General Accounting Office (GAO) found that large corporations pay an effective Federal income tax rate of 12.6 percent -- which, when adjusted for money-losing companies, comes out to about 16 percent. (That's close to the rate Zucman found, and that rate also included smaller companies.) A third of large corporations paid less than 10 percent.

There is overwhelming consensus on this issue. PopulistMajority.org cites a November 2013 poll conducted by Hart Research Associates and Americans for Tax Fairness. The poll showed that 79 percent of Americans want to close offshore tax loopholes, to ensure that American corporations pay as much on foreign profits as they do on US profits.

So why doesn't the government do that? After all, as the EPI's Hungerford notes, that would yield a half $1 trillion in new revenue over the next 10 years. Why the inaction?

That's What Friends Are For

First, there's the issue of that widespread hostility towards government that so popular nowadays among the wealthy and corporate executives -- except, of course, when the government is writing big checks to their corporations.

The media doesn't help, either. This account of the Medtronic situation, for example, shows how charged language leads the public to misunderstand tax issues. Without correction, the reporter asserts that Medtronic's "broader" purpose involves "accessing billions in cash trapped overseas," which is a demonstrably false assertion. (Although, to be fair, he does place that word in quotes later in the piece.)

Nothing is "trapped" anywhere, of course. Medtronic and its fellow corporations are free to transfer their offshore money at any time. In fact, that would be the ethical thing to do. Instead they spout evasive gibberish. "The combined company should generate significant free cash flow," said Medtronic CEO Omar Ishrak during an investor call, "which can be deployed with much greater flexibility."

Yeah, tax evasion'll do that.

But the real problem is exactly what you might expect: politicians. While corporate tax breaks are traditionally considered the purview of Republicans, lately Bill Clinton has been leading the charge for a "tax holiday" for American corporations who have been abusing tax havens and other offshore tax tricks. (For a good overview, see Danny Vinik in The New Republic: "Multinational Corporations Withheld Trillions in Profits During the Recession. Now, Bill Clinton Wants to Reward Them for It.")

With so many campaigns to finance, and so many lucrative post-political opportunities out there, this kind of corporation-coddling shouldn't be a surprise. And it's not.

No Justification for Inaction

Economist Josh Bivens does a yeoman's job of refuting the Alice in Wonderland logic of Clinton and other "tax holiday" advocates. The "holiday" crowd claims that reducing the tax burden on already undertaxed corporations will bring in additional revenue. Actually, it will cost the federal government something in the neighborhood of $100 billion over 10 years.

How can we really solve this problem? As the EPI's Hungerford notes, we can immediately end the deferral of taxes on offshore profits.

We can also follow the lead of the European Commission and dig more deeply into the tax evasion tactics used by companies like Apple and Starbucks. And we can close the offshore tax loopholes which are allowing corporations and their executives to skim the fruits of American resources without paying for them.

Ultimately, as the Los Angeles Times editorial board notes, we will need international cooperation to solve this problem on a global scale. But in the meantime the United States can act swiftly and decisively to close offshore loopholes and tax these corporations appropriately.

A little shame might go a long way, too. As Jacques Leslie writes, "there is no economic, political or moral justification for tax evasion." The good people of Minnesota who helped Medtronic get started in the 1940s might feel the same way.