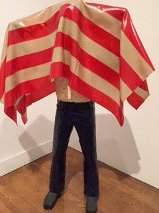 Faith is blind when we believe in something unseen without any or sufficient evidence. Underlying many of our actions is our belief that it will lead to the desired goal.

Many people act as if they don't believe (or accept) that exercise and a balanced diet lead to better health and a sense of well-being (although evidence exists).

It is as if they practice "blind faith" until they experience the holistic benefits themselves.

What we regard as "blind faith" is personal and may change with time like fashions. The great scientist Louis Pasteur tried to explain the invisible contamination by microbes. "The world into which you wish to take us is really too fantastic," the French newspaper La Presse printed in 1860. Pasteur began to devise tests to prove his belief that air contained living organisms invisible to the naked eye.

At times, a story demands more credibility than we can muster, so we change some of the details to reconcile ourselves to the "truth." Mr. J., a Christian, had to reframe for himself the concept of Christ and the crucifixion to render it credible. He was able to accept that Christ was crucified, not for the reasons often accepted, but for the fact that Jesus was a political dissident.

Mary Karr, American poet, essayist and memoirist, surprised her friends when she turned to Jesus 20 years ago. "Wouldn't you give a crutch to a one-legged man?" she answered by posing a question.

For me, Karr's metaphor of a one-legged-person is apt and applies to many. Most of us are crippled to a greater or lesser degree by life's imperfect circumstances; suffering and loss is inherent. In addition, the human condition is riddled with paradoxes and contradictions. Belief or faith can help us keep our balance on the rocky terrain of life. But the matter is a tricky one. Do we use our faith to pave the way for possibilities for all, or to judge and destroy others?

I can't end this blog without addressing the elephant in the room -- the blind faith of the terrorist suicide bombers. In Islamic practice, a person killed in jihad (the militaristic practice of murdering disbelievers) is believed to become a martyr who achieves a special status in paradise. Clearly, there can never be a proof for this conviction.

Conclusion: In truth, blind faith has the power to both save and kill. At times, a belief morphs to perceptible reality, as in the case of Pasteur, whose faith in science and the power of observation led to discoveries and improved our lives in remarkable ways.

More:
RoompoliticalhumanNewspapercrucifixion
Newsletter Sign Up
An essential daily guide to achieving the good life
Subscribe to our lifestyle email.
Successfully Subscribed!
Realness delivered to your inbox